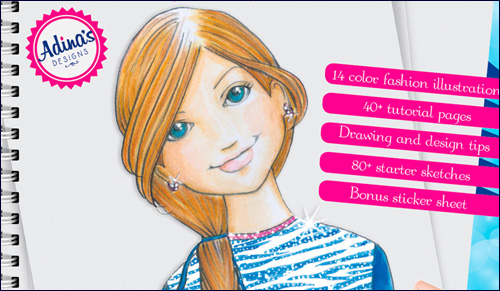 It’s not exactly news that when young girls watch Disney movies or play with Barbie dolls, they’re being exposed to hyper-unrealistic images of women. In mainstream media, females are typically scantily clad, have idealized proportions and are wearing heavy makeup.

Author and illustrator Yocheved Nadell wanted to provide an alternative to these images, so she created “Adina: My Design Sketchbook,” a book that features drawings of girls wearing modest clothing.

“It’s designed to empower girls to see that dressing modestly can be really cool, full of color, personality, individuality and, most importantly, expressive of their own style,” said Nadell, who studied clothing design in Los Angeles. “In ‘Adina,’ the girls are dressed modestly and the proportions of the figures are realistic proportions. They are really cute figures and the girls love them. My goal was to stay away from the highly exaggerated proportions I have seen in other books.”

“The book is really a blank canvas, which real-ly enables each girl to interact at her level,” Nadell said. “There are lots of tips and ideas throughout the book to help the girls achieve their own designs that they can feel really proud of. I hear from mothers that they didn’t think their daughters could draw and design, but the ‘Adina’ book really breaks the steps of drawing and design down for them so each can achieve success.”

The suggested reading age for “Adina” is “8 to 100” – Nadell said people at different stages of their lives interact with the book in various ways. “The younger kids interact with it on a much simpler level. They enjoy the stickers and coloring in the models. They can start to follow the tutorial on a simple level. The older kids, each according to their own level, can follow the tutorials and learn real design and illustration skills.”

Nadell also has a website, adinasdesigns.com, which includes video tutorials that supplement the book. She also has a Pinterest account showing images of Adina at various places, such as the Western Wall, by the Jerusalem light rail and in front of a bonfire for Lag b’Omer. 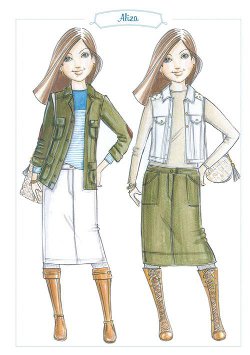 Nadell, who has lived in Israel for 11 years, was raised in Orange County. She attended Los Angeles County High School for the Arts and studied clothing design and illustration at what is now Otis College of Art and Design. She then worked for a few years in the clothing design industry but took a break to raise her children. Now that her youngest is in school, she’s working again.

Although “Adina” is Nadell’s first book, she said it won’t be her last. “I hope to turn this into a series of books. Each book will feature new tutorials and focus on teaching new design and illustration skills. Thank God, the response to ‘Adina’ has been just amazing. So I am working on getting the next book in the series out as fast as I can.”

Several Los Angeles-area parents said they appreciate how the book portrays girls to their daughters. Cindy Topol, who has five daughters, said that normally in children’s books, “The styles and the fashions aren’t geared toward a religious girl. … With ‘Adina,’ the kids can design their own outfits and patterns and still adhere to the guidelines of the modest dress code.”

Jonathan Myron, who has a 9-year-old daughter, said the book “reinforces self-respect. It shows nice designs and dispels the whole concept that modest dress is frumpy. It’s all very stylish.”

Instead of sending the message that girls should wear short skirts and tight clothing, “Adina” teaches that dressing modestly is a good thing, and not in an overbearing way, Myron said. “It’s all done in a way that children want to engage with. My daughter sits there and designs little outfits that happen to be very attractive and modest at the same time. It puts dressing modestly in a very positive light.”

This article originally appeared in the Jewish Journal LA.

Lifestyle of a Hasidic Woman

Girl Power?
Don’t Believe in Other Gods Versus God is One
Seeing Without Eyes
Why Shouldn’t We Eat Whatever We Want?
Comments
MOST POPULAR IN Current Issues
Our privacy policy
Aish.com Is Looking for Great Writers