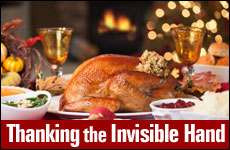 Thanksgiving weekend is made possible by a vast number of strangers. Don’t take it for granted.

Gratitude to the Almighty is the theme of Thanksgiving, and has been ever since the Pilgrims of Plymouth brought in their first good harvest. "Instead of famine, now God gave them plenty," Governor William Bradford later wrote, "and the face of things was changed to the rejoicing of the hearts of many, for which they blessed God."

The annual presidential Thanksgiving proclamations always invoke God, and they frequently itemize the blessings for which we owe Him thanks.

"Let us remember," urged Andrew Johnson in 1867, "that He has covered our land... with greatly needed and very abundant harvests; that He has caused industry to prosper, not only in our fields, but also in our workshops, in our mines, and in our forests. He has permitted us to multiply ships upon our lakes and rivers and upon the high seas, and at the same time to extend our iron roads to far into the secluded places of the continent... He has inclined our hearts to turn away from domestic contentions and commotions... and to walk more and more in the ancient ways of loyalty, conciliation, and brotherly love."

Today, in millions of homes across the nation, God will be thanked for many gifts – for the feast on the table and the company of loved ones, for health and good fortune in the year gone by, for peace at home in a time of war, for the incalculable privilege of having been born – or having become – American.

But it probably won't occur to too many of us to give thanks for the fact that the local supermarket had plenty of turkey for sale this week. Even the devout aren't likely to thank God for airline schedules that made it possible for some of those loved ones to fly home for Thanksgiving. Or for the arrival of Skyfall at the local movie theater in time for the holiday weekend. Or for that great cranberry-apple pie recipe in the food section of the newspaper.

Those things we take more or less for granted. It hardly takes a miracle to explain why grocery stores stock up on turkey before Thanksgiving, or why Hollywood releases big movies in time for big holidays. That's what they do. Where is God in that?

And yet, isn't there something wondrous – something almost inexplicable – in the way your Thanksgiving weekend is made possible by the skill and labor of vast numbers of total strangers?

To bring that turkey to the dining room table, for example, required the efforts of thousands of people – the poultry farmers who raised the birds, of course, but also the feed distributors who supplied their nourishment and the truckers who brought it to the farm, not to mention the architect who designed the hatchery, the workmen who built it, and the technicians who keep it running.

The bird had to be slaughtered and defeathered and inspected and transported and unloaded and wrapped and priced and displayed. The people who accomplished those tasks were supported in turn by armies of other people accomplishing other tasks – from refining the gasoline that fueled the trucks to manufacturing the plastic in which the meat was packaged.

The activities of countless far-flung men and women over the course of many months had to be intricately choreographed and precisely timed, so that when you showed up to buy a fresh Thanksgiving turkey, there would be one – or more likely, a few dozen – waiting. The level of coordination that was required to pull it off is mind-boggling. But what is even more mind-boggling is this: No one coordinated it.

No turkey czar sat in a command post somewhere, consulting a master plan and issuing orders. No one rode herd on all those people, forcing them to cooperate for your benefit. And yet they did cooperate. When you arrived at the supermarket, your turkey was there. You didn't have to do anything but show up to buy it. If that isn't a miracle, what should we call it?

Adam Smith called it "the invisible hand" – the mysterious power that leads innumerable people, each working for his own gain, to promote ends that benefit many. Out of the seeming chaos of millions of uncoordinated private transactions emerges the spontaneous order of the market. Free human beings freely interact, and the result is an array of goods and services more immense than the human mind can comprehend. No dictator, no bureaucracy, no supercomputer plans it in advance. Indeed, the more an economy is planned, the more it is plagued by shortages, dislocation, and failure.

It is commonplace to speak of seeing God's signature in the intricacy of a spider's web or the animation of a beehive. But they pale in comparison to the kaleidoscopic energy and productivity of the free market. If it is a blessing from Heaven when seeds are transformed into grain, how much more of a blessing is it when our private, voluntary exchanges are transformed – without our ever intending it – into prosperity, innovation, and growth?

The social order of freedom, like the wealth and the progress it makes possible, is an extraordinary gift from above. On this Thanksgiving Day and every day, may we be grateful.

Perseverance: NASA’s Mars Project and Preparing for Shavuot
The 21st President of the United States: Failure or Inspiration?
Hiding Their Jewishness
The Jewish Pope: Following the Questions Home
Comments
MOST POPULAR IN Current Issues
Our privacy policy
Aish.com Is Looking for Great Writers