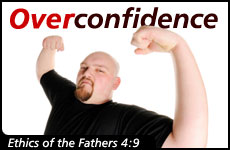 A rush to judgment poses the greatest threat to a civil society.

Rabbi Yishmael [son of Rabbi Yossi] says, “One who withdraws himself from serving as judge removes from himself hatred, theft, and [accountability for] unnecessary oaths. But one who is over-confident in rendering legal decisions is foolish, wicked, and arrogant.” Ethics of Fathers 4:9

An accused murderer stands before a judge for sentencing. Eyewitness testimony has proven his guilt beyond question. The law allows for no punishment other than execution. The judge raises his gavel to pronounce his verdict.

At that moment, the man’s wife rushes toward the bench. “Your honor,” she cries, “if you execute my husband you will leave me a widow. What crime have I committed that I deserve to suffer?”

Then the man’s children approach. “Your honor,” they plead, “if you execute our father you will make us orphans. What crime have we committed that we deserve to suffer?”

Finally, the man’s creditors come forward. “Your honor,” they complain, “if you execute this man you will leave us unable to recover the monies owed us. What crime have we committed that we deserve to suffer?”

If you are the judge, charged with dispensing justice, what do you do?

THE COMPLEXITIES OF JURISPRUDENCE

To complicate matters further, this hypothetical case assumes that both the facts and the verdict are clear. But many court cases involve contradictory evidence, incomplete or questionable testimony, and mitigating factors that obscure line between innocence and guilt.

The responsible judge, therefore, enters into deliberation with an acute awareness of the elusiveness of truth and the consequences of judicial error. An incorrect verdict that exacts undeserved money will make him the equivalent of a thief. A ruling that imposes an improper oath of exoneration (based upon circumstantial evidence) will make him responsible for the desecration of God’s name. And a correct decision may subject him to the hatred and resentment of the guilty party, even if his conduct from the bench was impeccable.

How much more prudent, teaches Rabbi Yishmael, to leave the risk to others, to demur from passing judgment, to allow more schooled and agile minds to grapple with the complexities of jurisprudence and thereby avoid the dangers of passing judgment. Indeed, we have already learned that “the world endures upon three things: upon justice, upon truth, and upon peace” (Ethics of Fathers 1:18). If passing judgment can potentially yield thievery in place of justice, false oaths in place of truth, and hatred in place of peace, then certainly the purpose of the court will not be served and the judge would best leave the legal system in the hands of others.

DO NOT HIDE YOUR EYES

But how can this be so? If there are no judges, then surely there will be no justice. If every judge seeks to pass the mantle of judicial authority to another, then the wicked will go free and chaos will reign. How dare any judge exempt himself from the responsibilities of judgeship at the community’s expense!

Rabbi Yishmael anticipates this very point in the second half of his mishna. Needless to say, civilized society depends upon its courts and its judges. But it is the judge who is over-confident in his own ability to enact justice that endangers the system and himself.

A surgeon, no matter how skilled, proceeds slowly and cautiously in every step of his operation. So does a diamond cutter preparing to shape a precious stone, an electrician about to splice wires, and a pilot about to land a jumbo jet. Their circumspection comes not from a lack confidence in their own abilities; rather it comes from a recognition of the catastrophic consequences of carelessness.

And so, Rabbi Yishmael cautions every judge to defer, wherever possible, to a jurist who possesses greater legal knowledge, superior discernment, or deeper experience. Only when there is no one more qualified to do the job should a judge accept the responsibilities of judgment.

Essential to a judge’s adjudication of the law is his appreciation of the law’s limitations. Consequently, Rabbi Yishmael brands any judge who rushes headlong into judgment as a fool who lacks sensitivity for the damage inflicted upon the fabric of society by those who come to hate the justice system they believe has betrayed them. Similarly, Rabbi Yishmael denounces such a judge as not only foolish but wicked, with no concern for making himself into a de facto thief through his faulty verdict. Finally, Rabbi Yishmael indicts such a judge as arrogant, for only an unabashed egotist would rule without adequate deliberation and thereby risk undermining the very foundations of justice.

Furthermore, not all conflict requires litigation. The role of a judge includes attempting to resolve differences through mediation that may obviate the need to try the case. Any judge who fails to exhaust every possible alternative before allowing a case to come to trial includes himself in Rabbi Yishmael’s scathing condemnation.

And what of our original case, of the murderer whose execution will punish his wife, children, and creditors as well? Rabbi Zev Leff explains that the answer is simple: the judge has no choice but to follow the rule of law and order the bailiffs to carry out the sentence. For a judge to decide any other way would compromise the integrity of the entire legal system by eroding public trust and ultimately allowing anarchy to reign. For justice to prevail, it must be truly blind and its arbiters must be coldly dispassionate.

What then of the injustice that results from blind adherence to the letter of the law? Well, what of it? Humans are imperfect beings living in an imperfect world. In the World to Come, all accounts will be balanced and ultimate justice will be done by the One True Judge. In this world, we simply do the best we can while acknowledging that absolute justice does not reside in our hands.

For those of us who are not judges, the same principle applies. We must look for every opportunity to resolve conflict and judge favorably, passing judgment whenever necessary in the continuous battle to embrace good and reject evil while reserving judgment whenever possible. Adherence to these ideals is the surest formula for bringing justice, truth, and peace into our world.

Stopping Too Soon: The Tragedy of the Israeli Runner

The "I Can" Campaign

How to Really Care about People: A Tribute to Wendy Zinner
The Blue Beyond
Great Place to Live
Is Eating Supposed To Be Spiritual?
Comments
MOST POPULAR IN Spirituality
Our privacy policy