5 Life-Changing Lessons From the Super Bowl 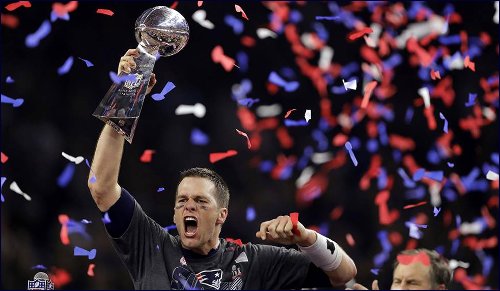 Because sports are human life in microcosm.

This article about the incredible 2017 Super Bowl game between the New England Patriots and the Atlanta Falcons was published last year. Its lessons are still timely.

The Super Bowl this past Sunday is being called one of, if not the, most memorable football games in history. Not only was it the first overtime game ever, with both the New England Patriots and the Atlanta Falcons tied at the end of regulation time, but it was marked by an impossible-to-believe finish with the Patriots pulling out a stunning last moment victory in spite of almost being routed almost to the very end.

The upset was staggering in its improbability. With but two minutes and twelve seconds remaining in the third quarter the Patriots trailed by 25 points. Odds makers at that point confidently said it was impossible for them to win. And yet they did. Tom Brady, their legendary quarterback, managed to somehow turn certain defeat into impossible victory.

What happened on the field in Houston transcends by far the game of football. Howard Cosell, the famous sportscaster, put it best when he said “sports are human life in microcosm.” We live out our lives in years; sports do it in hours and minutes. But the beauty of sports is that they can teach us in compressed time the things we desperately need to know in order to be winners in the game of life.

George Sheehan was both a prominent physician and athlete. He summed it up beautifully: “Sport is where an entire life can be compressed into a few hours, where the emotions of a lifetime can be felt on an acre or two of ground, where a person can suffer and die and rise again; ….where the past and the future can fuse with the present. Sport is singularly able to give us peak experiences where we feel completely one with the world and transcend all conflicts as we finally become our own potential.”

Let me share with you five lessons of this past Sunday’s Super Bowl that are reflected in insightful quotes which, by virtue of their vision, mirror truths to be found in our own Jewish tradition:

1. “Most people give up just when they’re about to achieve success. They quit on the one yard line. They give up at the last minute of the game, one foot from a winning touchdown” -Ross Perot

With a 25-point deficit, any “sane” person would have given up and acknowledged defeat. But losing is not what happens while the game is still going on. Even if there is the slightest chance of turning the game around – something that seemed almost a mathematical impossibility for the New England Patriots – losers can become winners. It doesn’t matter what the score was throughout the game, the only thing that counts is the ending.

Our lives can be filled with minor defeats. The Talmud reassures us that “it is possible for someone to acquire eternal reward in a final hour.”

Life never closes the door to victory in the eyes of God. In the words of the famous prayer on the high holy days, “repentance, prayer, and charity can overcome an evil decree from above.”

Even as we stand on the 1 yard line we can transform a life of meaninglessness into a legacy of blessing.

2. I've missed more than 9000 shots in my career. I've lost almost 300 games. 26 times, I've been trusted to take the game winning shot and missed. I've failed over and over and over again in my life. And that is why I succeed. Michael Jordan

Let’s face it: Tom Brady played a miserable first half of the game. He was sacked unceremoniously, he threw a pass that was intercepted; he just didn’t have it. So what makes him a true hero? Not that he was perfect, but that he had the guts, the courage, the mental stamina and the willpower to come back from failure and fulfill his potential.

He didn’t think of himself as a failure but merely as someone who temporarily failed. He knew he was better than that – and so he made that come true.

As servants of God, trying to lead a good life, we are often overcome by the awareness of our spiritual imperfections. We are tempted to conclude that a religious life is just too difficult for us. And so the Talmud hastens to advise us, “do not be wicked in your own eyes.” Don’t sell yourself short. Be aware of your potential for greatness. Don’t let mistakes drive you to self-professed defeat.

“Who is strong?” asked Ben Zoma in Ethics of the Fathers. The answer: “One who overcomes his own inclination.” Self-discipline is the key to success and it is within the power of all of us. Franz Beckenbauer said it well: “The strong one doesn't win; the one that wins is strong.”

Billie Jean King, the world’s number one professional tennis player who won 39 grand slam titles, summed it up this way: “Champions keep playing until they get it right.” And that goes for life just as it goes for sports.

“I can’t” is just another way of saying “I won’t”. Not to try is to admit defeat even before facing an opponent. And what defeats most of us is not the real difficulty of the task but the refusal even to attempt it. We are sabotaged by the fear that by trying and not succeeding we are demonstrating our weakness when in truth by failing to attempt what we know we ought to do we’re just proving our inadequacy.

Tom Brady tried a lot of passes that didn’t make it. That didn’t deter him from trying again.

Our lives present us with many challenges. The Talmud tells us, “All beginnings are difficult.” For many, that thought alone stops them in their tracks. They won’t even try to learn something new, start a different project, accept upon themselves additional personal or communal responsibilities. They will miss 100 percent of the shots they don’t take – and never make the touchdown passes that Brady did among those that were unsuccessful.

4. Getting ready for the Super Bowl is a lot like studying for the Talmud, as both require intense effort and concentration – Robert Kraft, owner of the New England Patriots

What was the most important key to the success of the winning team in the Super Bowl? Any athlete will tell you. Mark Spitz, nine-time Olympic swimming champion, said it well: “If you fail to prepare, you’re prepared to fail.” If you think victory is nothing more than good luck, listen to Jerry Barber, PGA professional golfer: “The more I practice, the luckier I get.”

Once again, the sages of the Talmud understood this well. The Mishnah teaches: “In accord with the pain is the gain.” Effort is what is rewarded above all else. And success, be it in Torah study or athletic pursuits, is the direct result of the hours devoted to practice – as Malcolm Gladwell so brilliantly proved in his book, “The Outliers: The Story Of Success”.

Robert Kraft, the Patriots owner, was ecstatic that his team won. But he knew what to emphasize as the reason.” “We try to prepare very hard, study very hard,” Kraft, 75, said in an interview. “You know, it’s like studying Talmud or Torah – it’s not just simplistic, it’s deep. We prepare as a team very well, we practice hard.”

And that is what life demands of us not only when we take the field in a football game but far more when we want to be remembered for lives of meaning and purpose.

Yogi Berra was a great catcher for the New York Yankees. But some people think his greatest talent was with words – words that were misspoken and often hilarious, yet at the same time possessing profound and brilliant truths. Near the very top certainly must rank his famous observation that “it ain’t over till it’s over.”

The Atlanta Falcons know that as a bitter truth. The Patriots made the world recognize it as a beacon of hope when faced with a seemingly insurmountable situation.

For all those who face moments of despair, desolation and hopelessness what happened this past Sunday in a sports arena deserves to be recognized as a paradigm of the possible in spite of impossible odds.

Allow me to be personal. Some weeks ago the aish.com editor chose to reprint an article I had previously written. In it I described my confrontation with death. My doctor had diagnosed me with an incurable illness which, upon checking on the Internet with the most recent medical literature, told me I had at the most approximately six months to live.

What many readers didn’t realize is that I wrote that piece almost seven years ago!

I am still here, thank God. Doctors do not understand it. But what I know and they seemed to forget is that “it ain’t over till it’s over” – and it is only God who is entitled to make the decision as to when that is.

Just as the Super Bowl can go into overtime, our own lives can be extended. I choose to believe it is because I have strengthened my commitment to serve God and the Jewish people that God in turn decided it was in his interest to keep me around a little while longer.

That is true for all of us as well. The Super Bowl wasn’t over at halftime, or even three minutes before the end when the experts all felt there was no more hope for the Patriots. They were wrong. And it is our spiritual obligation to never give up hope. Sunday proved it for football. Our lives need to confirm it for faith in the future and for the way in which we choose to live our lives as proud members of the Jewish people.

How I Achieved My Personal Breakthrough

Go Out with Your Spouse and Kids
Vayelech 5783: Regret and Repent
Rabbi Sacks: Focus On the Important, Not the Urgent
Put Your Foot Down: Are Human Feet Poorly Designed?
Comments
MOST POPULAR IN Spirituality
Our privacy policy
Aish.com Is Looking for Great Writers