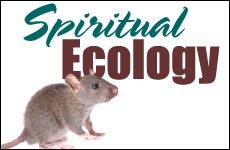 Everything in the world has the capacity to serve a higher purpose, even mice.

A few years ago I noticed beads of mouse droppings in my pantry. Mouse phobic, I persuaded myself that it was one mouse that had taken a wrong turn and would soon reverse his direction.

But that was not the case. The next day the mice descended on us in droves.

My husband was out of the country. I bought four mousetraps, old-fashioned metal enclosures that look like rectangular cheese graters. Gingerly so as not to inadvertently trip the metal doors, I applied slices of hot dogs to the metal hooks, and had them working 24/7. Trapping mice became a full time occupation.

But getting rid of the mice, most of them live, was almost as difficult as trapping them in the first place. Any fearless person who walked into my house was told to take a trap and release the mouse on his way home.

If only I had known about Reb Kerstirer. It is said that hanging a picture of Reb Yeshaya'le Kerestierer, a Hungarian Chassidic rebbe, is a charm for getting rid of mice. In fact he is informally known as the Mouse Rabbi.

His entire file had been gnawed to dust by a mouse. The execution was nullified.

This is the story: In Russia, a young Jewish man was sentenced to death for being Jewish. He went to Reb Kerstierer who promised to help him. But as the execution date neared, nothing happened. Every time the boy asked, the rabbi told him, “My friends are working on the case.” Soon came the day of his execution. The authorities went to collect the young man but his paperwork could not to be found. His entire file had been gnawed to dust by a mouse. The execution was nullified.

Apparently everything in the world has the capacity to serve a higher purpose. And now in my own life, I have gone from shuddering at mice to seeking them.

You see my friend Bob breeds corn snakes, and when my son Gavi, then 12, saw them, he wanted one. Bob called me and said that he had nine snake eggs and would save one for me. The egg hatched and he presented us with a lovely looking baby corn snake whose brown and golden crosshatched hide could provide the skin for a luxury handbag.

“What does he eat?” I asked naively.

“Where do you get these frozen mouse embryos?” I asked.

“In the pet store,” he said matter of factly. Of course, I was not keen about keeping mouse embryos in my freezer. I found the idea repulsive.

But like so many of life’s offerings, one does get used to it.

But recently no mouse embryos have been housed in my fridge. There is a severe shortage of them in Jerusalem pet stores.

Not too long ago, Bob had supplied us with two frozen mice he had somehow scored and we were temporarily in business.

Last week, building began on the lot next to us. I saw a mouse in our house but I was so busy preparing for an evening lecture that was to take place in my living room, I used my denial mode and hoped he would leave the way he came in, most likely through the front door.

Rebbetzin Tzipora Heller, a renowned Torah teacher gave a class on how to face life’s challenges. She said that one of the problems of life is fragmentation. Instead of being able to look at life as a whole, we look at each annoyance as a piecemeal threat and let it conquer our well being, disturb our peace of mind.

But if we are aware of our larger goals in life, then those annoyances can be folded into and subsumed by our greater purpose. For example, if your goal is to bring light to the darkness, then even if you are in a taxi and the driver overcharges you, you can speak to him nicely. You can bring God’s light into this world.

At the end of the class one woman came up to me and sweetly said, “Do you know you have a mouse in your house?”

Luckily she whispered because with 25 women in the room, I could have had trouble on my hands.

After the women left, I searched for the mousetraps but couldn’t find them.

“Well,” I said to my husband, “the mice will have to wait until tomorrow.” I went to sleep.

But in the morning I saw the mice traps out. My sons had found them. Not only that, they had apparently caught two mice, almost immediately.

Gavi told me that he fed one to Nachshon, the snake, who ate it whole.

What is ecology after all but recognizing the special purpose of each creature in the world?

In my fear and haste to get rid of the mice I had forgotten that they had become precious commodities.

What an ecological household we have become, I thought to myself. What is ecology after all but recognizing the special purpose of each creature in the world? Those mice I wanted banished nourished our snake.

And as there is physical ecology, so too there is spiritual ecology -- believing that seemingly random events, no matter how chaotic or difficult, have a purpose.

To me, hell is believing that life is malevolent chaos. But as Rebbetzin Heller said, when you believe that everything that comes to you can be significant, then even a mouse, as in the Russian prisoner story, is capable of bringing redemption.

When You Hate Yourself

My Painful Path to Happiness
Why Are The Prayers Of Yom Kipur So Repetetive?
Ha'azinu 5783: A Time for Unity!
Twisted Thinking
Comments