Start at the Bottom 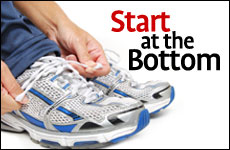 If the name doesn't ring a bell, you're not a basketball fan. This is a man who has an enduring place in sports history as college basketball's most successful coach. Wooden created a sports dynasty against which all others are compared, and usually pale. His teams at UCLA won 10 national championships in a 12- seasons stretch from 1964 to 1975. From 1971 to 1974, UCLA won 88 consecutive games, still the NCAA record. In recognition of his achievements, he was the first person ever elected to the Basketball Hall of Fame twice - as both a player and coach.

His nickname was the Wizard of Westwood. His basketball wisdom was legendary. But it was commonly recognized that he was a sage not only for training those he taught with unique skills for winning on the court, but for teaching his disciples how to achieve excellence in life as well. Wooden took young, immature athletes and turned them into responsible and honorable men.

What was the secret of his greatness? Remarkably enough, it began with shoelaces. And it resonated with me because it confirmed a seemingly strange ruling in the Talmud.

Start at the bottom and then work your way up.

In a moving appreciation of Wooden’s life, George Vecsey of the New York Times sought to capture his uniqueness by describing how Wooden began training his freshman squad. Invariably the players were stunned because they didn't start with layups or defense. They weren't allowed to shoot baskets. Something else had to come first. The philosophy of this master teacher was “start at the bottom” -- and by this he meant that before they played a varsity game they had to learn the fundamentals, the simple rules about how to pull their laces tight and even, so that they suffer no sprained ankles.

Start at the bottom. Learn how to tie your shoes correctly. Then work your way up to master all the other far more difficult nuances of the game.

The obituary reminded me of a story that went back more than three decades. There was a striking similarity between Wooden’s significant emphasis on shoelaces and the amazing way in which I had inadvertently been responsible for a young man making a firm commitment to lead a life filled with Jewish values and practice.

Hanging on by a Thread

It started with a phone call. “Rabbi,” the young man told me, “I became a bar mitzvah in your congregation, the Young Israel of Oceanside. I haven't seen you since because frankly, my bar mitzvah marked the end of my connection with Judaism. I'm sure you know my family wasn't really religious. They just felt I needed some kind of Jewish education so they sent me to your Hebrew school. Once I was 13 and had my traditional rite of passage, neither they nor I felt the need for any other connection with our faith or our people.”

But he then went on to tell me that while he was in college he had what he called a life-changing moment that started him on the road to a reconnection with Judaism.

“Let me tell you how it happened,” he went on. “When I was a little boy of 10 sitting in your Hebrew school classroom, you taught us how Judaism takes every simple act, no matter how minor, and transforms it into a mitzvah, a way in which we can remember God and add meaning to our lives. I wasn't really old enough to understand the idea, but I did listen to the way you illustrated it. Since I looked up to you I decided to adopt what you said as my daily practice. When I put on my shoes I put the right one on first but when I tied my shoelaces I always began with the left. I even forgot the reason you gave for this -- today I know it's meant as a reminder to tie the Tefillin on our left arm, not our right, because God is ‘the stronger hand’ and ours is the weaker -- but I kept on doing it the way you taught us I guess out of force of habit.”

Just imagine. For years this young boy, then this teenager, kept observing one minor law, while estranged from Shabbat, the laws of keeping kosher, and even the High Holy Days. Only the way he tied his shoes remained.

“I remained attached to Judaism by a shoestring. Thank God it was as strong as a rope."

“Then one day as I finished putting on my shoes I said to myself, here I am doing something and I have no idea why. That is so much like the rest of my life. I never stop to think why. Why am I on this earth? Why was I born a Jew? Why do I do some things and not others? Let me try to begin to understand. And let me start at the bottom. Let me see if the way I tie my shoes makes any sense and then go on from there. So I asked the local rabbi at my university to teach me. The more I studied the more I came to understand that the way we put on our shoes is just the beginning of the ways Judaism helps us create a spiritual life.

“I remained attached to Judaism by a shoestring. Thank God it was as strong as a rope."

That young man is today fully observant with a beautiful family of three children building a home that is a paradigm of Jewish values. Look at the power of a simple shoelace! Lo and behold the Wizard of Westwood leaves a similar legacy that reminds all of us it is the seeming minutia of behavior that more than anything else help to define us.

John Wooden, his obit tells us, always carried with him a piece of paper with a message from his father that read:

“Be true to yourself. Make each day a masterpiece. Help others. Drink deeply from good books. Make friendship a fine art. Build a shelter against a rainy day.”

To ensure that his life would fulfill these goals, Wooden was wise enough to impose standards that began with something as mundane as the proper way to tie shoes. And that was the real key to his greatness. That's how he created basketball champions.

We want our lives to become spiritual masterpieces. It's all in the details. Judaism shows us how to start at the bottom and work your way up.

Degrees of Separation: Ethics of Fathers 4:7

What Is Freedom?
Lessons from the Book of Jonah
Where Are We? The Body, Brain, Soul Problem
Dr. Sheila Nazarian’s Escape from Iran
Comments
MOST POPULAR IN Spirituality
Our privacy policy
Aish.com Is Looking for Great Writers