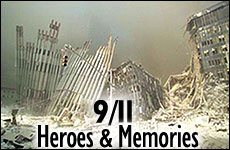 Finding solace for those left behind.

And there was evening and morning, seven years worth, and the world is still unformed and void, with darkness over the face of the deep.

For all the politics, bombs and battles in the wake of Sept. 11, 2001, what strikes the mourners is a more personal and sensual vacancy, the absence of touch and sight and voice, a severing of personal histories.

It is that quest for the senses that has inspired some of previous years private memorials.

Out in the Rockaways, not long ago, firefighter and former lifeguard Steve Belson -- one of three Jewish firefighters to die in the World Trade center -- was celebrated with a morning swim in the ocean just off the sands of Bell's Beach, as Beach 92 was officially renamed in his honor. His friends wanted to feel dripping wet with the memories of him, be buoyed by him, immersed in the ocean of him. At dusk, the day for Bells, as they called him, continued in a restaurant right on the water. A rock band played.

He knows his dad was a hero; seven survivors of the World Trade Center came forward to say the young lawyer saved their lives at the expense of his own.

Has it been seven years? Not for everyone. It's been 6 1/2 years for Jason Zucker, born a few months after his dad, Andrew, disappeared in the South Tower's inferno. He knows his dad was a hero; seven survivors of the World Trade Center came forward to say the young lawyer saved their lives at the expense of his own. But stories are one thing and having no father to kiss is another. Now the boy will have a Torah to kiss, a new Torah with his father's name inscribed on the velvet.

In Riverdale Jewish Center completed the writing of a new Torah scroll in honor of Zucker, the local hero. It was read for the first time on Sept. 11, 2006, a Monday, and was read for the first time on a Shabbat later that week on the actual yahrtzeit, Elul 23. An Israeli silversmith has crafted silver rimonim (pomegranates), a stylized evocation of the two towers, to adorn the scroll's two wooden handles.

Erica Zucker, Andrew's widow and Jason's mom, said: "Andrew was very connected to the shul, and we still are. I like the idea of something tangible, for something of Andrew to be there; something for Jason to see and touch as he grows up, to see the community's love for Andrew. I can always tell Jason about Andrew and how amazing and supportive the community was and is, but this is also a chance for Jason to see it -- the community writing a Torah in memory of his father."

It is Elul, the season of visiting cemeteries before the New Year. Student groups that fly to Poland to see death camps can now take a subway to Chambers Street. There is a messianic legend that when the Third Temple is built it will descend instantly, whole and complete from Heaven. Now we have a new apocalyptic legend -- a death camp that descended on New York; klieg lights suddenly glaring through the a pale, smokey night haze; noses sensing a stench that couldn't quite be placed; soldiers rolling by on lorries; the sense of souls piled upon souls beneath ash and palsied metal.

On Beekman Street, a few blocks from the hallowed ground, Rabbi Meyer Hager, spiritual leader of the Wall Street Synagogue, anticipates the return of that most haunted day. He takes a black hat down from its shelf, the hat he wore on that morning five years ago. The hat is splotchy with an odd pale soot. As if pointing to an object on the Seder plate, he says: "This is the debris. I shook it off but then I caught myself. I thought, maybe I should keep it the way it is, so someone can see and learn what it holds for the future."

He remembers the soot and death that fell as gently "as snow."

The saddest day of the Jewish year, Tisha b'Av, another day of fire and death, is also 9/11, the ninth day of the 11th Hebrew month.

Rabbi Hager said he couldn't help but notice that the saddest day of the Jewish year, Tisha b'Av, another day of fire and death, is also 9/11, the ninth day of the 11th Hebrew month.

Sometimes Rabbi Hager walks to the corner and looks up and sees nothing. As rabbi of the nearest synagogue to the World Trade Center, he had lit menorahs in its lobbies. He also stood 110 stories higher, on what seemed like an urban Everest, the roof of the World Trade Center, back in April 1981, to say the Blessing of the Sun, a blessing said only once every 28 years when the heavens are said to be aligned exactly as they were on the fourth day of creation, the sun's biblical birthday. While not quite Neil Armstrong, surely no man before Rabbi Hager ever said the Blessing of the Sun in greater proximity to the sun itself.

Six who died in the World Trade Center were financial supporters of the shul, even if only one or two of them came by even occasionally. When the rabbi thinks of martyred congregants he thinks as easily of the firemen of Engine 6, immediately adjacent to the shul. He remembers seeing firefighter Ben Johnston riding away on a fire truck and never seeing Ben Johnston again. On the first Shabbat after 9/11, firemen came to light the fires of candlelight so the shul could function despite the absence of electricity.

Contrary to the legend that those who prayed were late and therefore immunized from terror, services on that 9/11 ended at about 8:15 a.m., said the rabbi, so everyone had plenty of time to get to their offices in the World Trade Center and no one who prayed at the shul that morning was saved simply by virtue of his virtue.

However, said the rabbi, one gentleman who worked in the World Financial Center, taking a route that brought him through the Trade Center plaza, stayed another half-hour in the shul that day because he didn't quite understand his morning Talmud lesson and wanted clarification. By the time he left for work, the first plane had hit and police were turning people back.

But lives saved by coincidence or irony ought not be automatically confused with saintliness. Zucker, an Orthodox Jew and former volunteer firefighter, also put on tefillin and studied before he went to work that morning, and saved not himself but seven of God's children before America knew what hit them.

Madeline Brandstadter, Belson's mother, said she considered herself and her son to be thoroughly secular Jews. But she remembered that Rabbi Joseph Potasnik, FDNY chaplain, remarked in his eulogy: "They said that Steve was not religious. You tell me how someone can run into a burning building to save people and not be religious."

Belson wasn't much of a Jew if Jewish is defined by affiliation. He was more likely to nurture his soul through the Grateful Dead or Hot Tuna. His buddy, Fire Chief Butch Brandes of Battalion 41 in Flatbush, a vice president in the Ner Tamid fraternal organization of Jewish firefighters, remembered how he used to ask Belson all the time to join Ner Tamid.

Belson, who had back surgery a few months before 9/11, charged into the burning North Tower and was last heard from on the 40th floor. He was never found.

In another way, Zucker's sister, Cheryl Shames, is there, too, a reader of victims' names on September anniversaries; a volunteer giving tours of the World Trade Center grounds; and soon to be a docent for the Tribute Center that opened on Liberty Street Sept. 6.

"Besides telling them about the World Trade Center," said Cheryl of her tours, "I get to tell them about Andrew. When people look at the Wall of Names, Andrew's name is the second to last, of almost 3,000 names. But if you came on my tour, you'll feel you knew him, that you had a connection to Andrew Zucker. I'm doing it for Andrew. I pass around photographs of Andrew."

Cheryl remembers that last time she saw her brother: "It was two Shabboses before Sept.11. That Friday night he kept us up until one or two in the morning, talking through the whole timeline of our family's life, remembering the nittiest details. My eyes were closing from tiredness. He needed to talk. That was just days before 9/11."

He likely talked about being active in Jewish student life at the State University at Binghamton; his passion for being a volunteer media ombudsman, defending Israel from misperception; his prescient sense of current affairs, sending out e-mail advisories and petitions about the Taliban and the terrorists "like Hitler," he said, who would soon take his life. He e-mailed, "All it takes for evil to triumph is for good men to do nothing."

Good men were doing nothing, he said to friends, and he kept saying it until he was more right than he ever imagined.

On Sunday, a Torah with his name on it will be danced down the street under a wedding canopy, not unlike Zucker's own, though it hurts to watch a wedding canopy going solo. The new Torah will be greeted on the steps of the shul by each of the other Torahs, welcoming Zucker's Torah into the ark. It's a way to think differently of Zucker's resting place; "ark" sharing the same Hebrew word as "casket."

Almost all of us expect further attacks. And yet a Torah is kissed, firemen are swimming and music plays.

Courtesy of The Jewish Week.