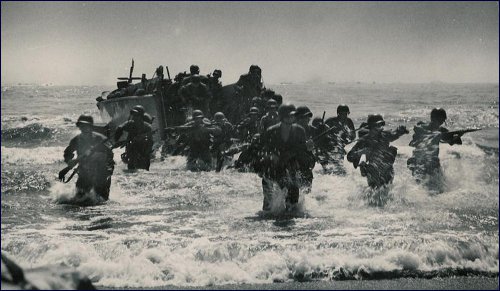 We travel to France every Passover to join the program our daughter and her husband organize there, but this year was to be different.  We were beginning our trip by visiting Normandy, the site of the World War II Allied invasion and the grave of my uncle Alec, my mother's youngest brother. We arrived in Normandy yesterday evening, having taken a train from Paris. Our hotel, The Churchill, in the hamlet of Bayeaux, is wonderfully charming, nestled in the middle of an historical square in one of the very hard-hit towns just inland from the beaches. It is filled with photographs, newspaper articles and other memorabilia of the war. In fact, everywhere we went today was filled with artifacts as well as souvenirs. It was hard to think, however, of buying an apron with a map detailing the Normandy invasion.

We met the tour bus early this morning, manned by an incredibly knowledgeable guide. He has been a World War II buff, specifically interested in the Normandy invasion for many years. But when he was laid off his IT job in London, he moved here and began working for his friend who owns this tour company called “Battlebus Tours.”

The tour was very moving. Understanding how the Germans had insinuated themselves into every aspect of the lives of the locals was an eye-opener. And hearing how the invasion was planned and executed was overwhelming. Somehow I had no idea of the magnitude of the operation, all that was involved in organizing, scheduling and instituting this invasion. I had no idea of the numbers of boats, planes, vehicles involved. I didn’t realize the amount of geography covered here in Normandy, nor the amount of intelligence required. And, mostly, I didn’t realize the number of soldiers who died here, nor did I comprehend how young they were. I found myself having trouble breathing and my eyes tearing up so often as I grasped the reality that we confronted as we moved from site to site.

Hal refused to exchange his dog tags, and painted a huge white Magen Dovid, on the back of his jacket.

We heard many stories of many soldiers, but the story of a young Jew from Brooklyn, named Hal Baumgarten, who landed on Omaha Beach really impacted us. Jewish soldiers were offered the option of changing their dog tags, which stated their religion, for ones that said “Catholic.” That way if they were captured, they wouldn’t be identified as Jews and be sent to a concentration camp. Hal not only refused to exchange his tags, but actually painted a huge white Magen Dovid, Jewish star on the back of his jacket.

As he left his landing craft, a shell exploded, destroying the left side of his face and jaw. Since he determined that he was going to die anyway, he immediately decided to run up the beach to rescue his sergeant who had fallen. He was then shot through his helmet, right into his brain. He said that he put two fingers into the shell holes and felt “jelly.” That injury probably destroyed his ability to feel pain, so he continued fighting. By the grace of God, he survived, returned to the States, where he completed medical school and practiced medicine for many years. Every year he returns to Omaha Beach on D-Day.

The feats of bravery we heard about are too numerous to mention. We finished our tour with a visit to the American military cemetery where over 9000 soldiers are buried. We walked through it, looking for the Magen Dovid grave markers, where we said Psalms and left a stone on each one. We wanted to find all that we could find and leave an indication, both physical and spiritual, that they are remembered and valued. I cried over these boys’ graves -- young Jews who died fighting for the liberation of other Jews.

I cried over these boys’ graves -- young Jews who died fighting for the liberation of other Jews.

We came to Caen, another town devastated by the Germans. Uncle Alec, my mother’s younger brother, is buried in the cemetery at Ranville, a small town near here. We arrived at the cemetery an hour before sunset. It is small and well-kept, with daffodils blooming over many of the graves.

Having done research before we left LA, with my brother-in-law’s help, we had no trouble locating his grave. The intensity of the experience surprised me. I knew that I'd get emotional seeing it -- after all, no one in the family had ever come here. Both me and my husband, Larry, broke down crying as soon as we saw the marker, a Magen Dovid, with Alec’s name, his unit, and the traditional Hebrew acronym engraved on it. Below was an inscription detailing how much he is mourned by his parents and siblings. I "spoke" to my uncle, feeling that I knew him, even though he died two months before I was born. We found it hard to leave… It’s hard to imagine that we will ever return.

Had it not been for the Normandy invasion and liberation, and the courage and conviction of people like my uncle, it’s hard to imagine what the consequences would have been.

Tova Hinda Siegel, a practicing Nurse-Midwife, is the mother and grandmother of several children who live in various places around the world. She and her husband, Larry, live in Los Angeles.

Why I Think This World Should End

My Car
Don’t Believe in Other Gods Versus God is One
Seeing Without Eyes
Why Shouldn’t We Eat Whatever We Want?
Comments
MOST POPULAR IN Current Issues
Our privacy policy
Aish.com Is Looking for Great Writers