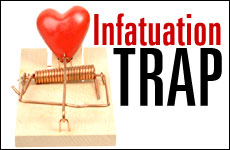 How many times do you want to get married? Pointers on how to get it right the first time.

A young man recently told me about his cousin who was engaged to a particular girl. This cousin’s father confronted his son about the numerous things he disliked about his fiancé and pointed out the many flaws in their relationship. “Don’t worry, Dad," his son responded, "this is only my first marriage.”

Why have so many people given up? For one thing, it’s very difficult to see through the foggy cloud of infatuation. We know the trap, but we still get fooled by it. We can find ourselves enamored by someone who isn't a good choice for a marriage partner. (As one young woman recently said to me, “What was I thinking? He’s so far from being the type of man I should have been dating. Now I realize that I was in love with who I wanted him to be, not with who he really was.”)

The tricky thing is that infatuation is an integral part of the dating process. We can’t get rid of it; we’re not meant to! Our goal is to keep the infatuation in check, to hold it off to the side as we investigate whether there is something significant in our connection with the person we are dating.

Infatuation is always temporary. No matter how strong the chemistry is, it will eventually start to fade. And when it does, if there isn’t something real and solid serving as the basis of our relationship, we will crash and burn (never recommended).

The relationship between love and infatuation is like making a campfire. You need a couple of logs, some twigs, paper, and matches. Try kindling the logs directly – you'll be waiting all night. But if you just light the twigs and paper without the logs, the fire will burn bright, but only for a short time. You need both the twigs and the logs.

Infatuation is the twigs that play an important role in igniting the logs of love. Make sure infatuation isn't the foundation of your relationship. When you get carried away with the chemistry and forget about the substance of the relationship (the logs), chances are you'll end up brokenhearted. It's only a short matter of time before the fire will burn out.

One essential way to keep infatuation in check is to verify that we are seeing more to the person than his or her image. Image is important; you need to find your potential spouse attractive and feel proud to introduce him or her to your friends and family. But all too often there is a tendency to become fixated on a person’s image, and ignore who the person really is underneath the image. You can become so infatuated with who you think this person is, so taken with a particular quality or ability of this person, that you can’t see who the person really is.

We can become infatuated with a number of qualities that comprise a person's image. A few possibilities are:

Another crucial way to protect yourself from the infatuation trap is to make sure that you have common values and goals. No matter how great the initial chemistry is, if your values and goals are very different, the odds of your marriage working decrease significantly. When the excitement wears off and those twigs burn out, is there a unifying basis for the marriage?

Values are essential to who you are. They are the foundations upon which your goals and dreams are built, the bedrock of your moral compass. Before getting married, it's imperative to take time out of your busy schedule to clarify what your real values are – the handful you really live by. Those are the ones you can't compromise on. Doing so would be a negation of self.

When dating, it is essential that your core values match up. And be careful to avoid the 'common interests' mirage. Many people think that just because they share common interests (like playing tennis or botany), this will be enough to hold them together. It's not.

Marriage is built on common values. Make sure yours match on the big issues.

The sober truth is that no matter how many common interests a couple share, if their values clash, trouble is in store. Marriage is built on common values. Make sure yours match on the big issues.

So how many times do you want to get married? Hopefully just once. Regain your ability to trust yourself in the dating process, educate yourself and get it right the first time.

In my book, I Only Want to Get Married Once, I delve deeply into eight additional ways to avoid being tricked. I Only Want to Get Married Once is built upon ten essential questions you should ask yourself when dating. These questions are carefully designed to help you clarify whether there is real, lasting potential with the person you are dating. They are also designed to reveal any unhealthiness in your relationship. The book also includes a number of exercises to help you identify your core self, values and needs so you will better understand what type of person will make a realistic marriage partner for you. Click here to order your copy.

Chana Levitan MSc is an educator, speaker, therapist and author with 25 years of experience. Her new book, That’s Why I Married You! How to Dance with Personality Differences (Gefen Publishing House, 2016), reveals how personality differences can actually be the battery that a couple can use to reenergize their marriage. Chana’s first book, I Only Want to Get Married Once (Gefen Publishing House, 2010; Grand Central Publishing, 2013) is a clear and practical guide to choosing the right marriage partner. Through the 10 essential questions discussed in this book, Chana assists her readers to gain the insight and clarity necessary to make the right decision. I Only Want to Get Married Once became a best seller in Israel has been translated into Chinese and Romanian.

How Do I Know If This Person is the One?

6 Dating Mantras for the Marriage Minded