The Power of Making a Difference 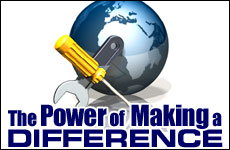 Creating a legacy and making your mark.

Parents basically want two things for their children: they want them to be happy, and they want them to be good. All the wealth in the world isn’t worth very much if a person isn’t happy. The same with being a good, decent, moral person — what good is all the money in the world if a person isn’t a decent human being? For parents, good, happy children are the cake; wealth is just the icing. But beyond wealth there is an even sweeter dessert for parents.

The answer is that beyond being good (which is an enormous and invaluable achievement, one that can’t be undervalued), these people have added to the overall good of the world. They have gone beyond themselves and made a difference for others as well.

How can one make a difference and leave a legacy in the world? Here are some strategies and tools:

The Hebrew word for power is memshalah. Israelis use the word memshalah to mean “government” or “the seat of power.” “Power,” however, is a loaded word. It has all sorts of negative connotations, connotations that were immortalized in 1887 by the words of the British Lord John Acton when he wrote in a letter to Bishop Mandell Creighton that “Power tends to corrupt, and absolute power corrupts absolutely.”

Let’s take another look at politicians, and this time, let’s give them a reasonable benefit of the doubt. People go into politics because they want to make a contribution to their community, their city, or their country. They are well-meaning, idealistic people who want to make a difference. Unfortunately, they don’t always stay that way. What happens to politicians along the way that causes them to jettison the values and principles they started out with? Why is it that the very people who begin careers with the good of others in mind frequently end up being derided for being concerned about little more than themselves? We all know that if our society is cynical about anyone, it’s cynical about politicians.

Let me put it another way. If the drive for integrity, the drive to be a good person, is so strong that it trumps the drive for love, then what is it that could possibly trump the drive for integrity? If we look at our hierarchy of hits in a baseball game, the answer becomes clear: Power is a home run, and there is something seductive about home runs. The pleasure of power is so intense that it can seduce even the finest people into compromising what made them such good people in the first place. When Lord Acton said that power corrupts, he was commenting on the seductive allure that power holds.

Does this mean that good people should stay away from politics? That would be unfortunate, wouldn’t it? After all, government does have the potential to exert a positive influence on society and to improve people’s lives, so it would be a shame if good people were discouraged from getting involved.

Power corrupts because it’s a cheap thrill. Let us illustrate with an example. There are two ways a woman can own a diamond necklace: either she can spend thousands on the real thing, or, if she can’t afford the real thing, she can spend just hundreds and buy a very nice faux diamond necklace. The downside of this kind of jewelry is that it’s not real. The upside is that you get at least some of the pleasure of owning a diamond necklace. Power, at least the corruptive and destructive power we are used to thinking of, is a faux experience. It’s an illusion of something more profound, more real. Real power is creativity. Genuine, authentic creativity is the ability to build, to create something that projects and promotes goodness into the world. Genuine power then is the power to create and build. It’s a power hitter hitting a home run.

Imagine you were able to bring peace to the Middle East. What an incredible feeling of accomplishment, what an enormous difference that would make for so many and for the world. What a feeling of creative power that would generate! That is what power does when it is wedded to integrity, morality, and what is good and right. So the power of leaving a legacy in the world is based on principles of integrity. It is not that making your mark in the world is better than integrity; rather, it incorporates integrity and brings it home.

But power for power’s sake — that’s destruction. And it is easier to destroy than to build. It’s always easier to create a faux experience, whether it’s faux jewelry, a forged piece of art, or counterfeit dollar bills, than it is to create and earn the real thing.

The Jewish view of power is about building and creating with integrity.

The Jewish view of memshalah, power, is about building. It’s about using one’s abilities to create and build in the service of one’s morality and integrity. That’s real power, and that’s a highly pleasurable sense of meaning — a real home run, not a virtual home run.

It’s interesting to note that in Judaism, the essence of kingship is not to rule or to legislate, but to be a provider for the nation. That is why we refer to God as the “King of Kings” -- because He is the ultimate provider of life itself. Historically, certainly at the time when the Jewish people actually had a king and throughout most of history since then, a king was little more than a great exploiter -- the polar opposite of the Jewish idea. By and large, kings have taken the resources of others to serve themselves. Only from the time of the French Revolution some 200 years ago was that idea seriously challenged.

Judaism asserts that everyone has the power of true memshalah — the ability to make a difference. Think of a person who has had a lasting and positive influence on your life, someone of whom you could say, “Thanks to him or her, my life is much different than it may have been, and in a very good way.” Why not take a moment and write that person a letter or give him a call? Appreciation will give both of you a sense of fulfillment. He has used his power in a creative way to make a difference in your life.

The Torah gives us an insight into how God intended that man make a difference. The Talmud asks why Adam, the first human being, was created alone. At the time of his creation he had no wife, no family, no neighbors — he was a lone human being. The Talmud’s answer is that Adam was created alone so that he would experience looking at the world as an individual and say to himself, “The world was created for me” (Sanhedrin 38a). What do these words mean? A child’s understanding of “The world was created for me” is that it’s all mine and I can do whatever I want with it. In fact, children often think that because a toy is theirs they have the right to neglect and destroy it as they see fit. After all, they say, “You got the toy for me. It’s mine, and I can do whatever I want with it.” Or they feel that they don’t need to share it with their siblings or neighbors because “It’s mine!” An adult, on the other hand, knows that when something is his it means he is responsible for it.

The Jewish understanding is that Adam was created alone so that he would feel the world was his, not to destroy, but to take care of and to safeguard. Adam was given a twofold responsibility in the Garden of Eden, to care for the garden, and to safeguard it from harm: “l’ovda ul’shomra — to work it and to guard it” (Genesis 2:15). This means that we are all symbolically “Adam”. Every human being is responsible for the well-being of the entire world. That’s an incredible statement about human potential and human power — the creative kind.

This article is based on the lecture Five Levels of Pleasure by HaRav Noach Weinberg, ztz'l, founder and dean of Aish HaTorah and is being published l'ilui nishmaso on his first yahrzeit which is this week.

Excerpted from Step Up the Plate: Baseball, Judaism and How to Win the Game of Life! Click here to order.

The Road to Resilience

Maximizing Your One Shot at Life

10 Qualities of an Emotionally Mature Person

Jacob's Ladder: How to Rise Up When You're Down
Should I Break Up, Get Engaged or Keep Dating?
Time Is Your Precious Commodity
A Constant World in Flux
Comments
MOST POPULAR IN Spirituality
Our privacy policy