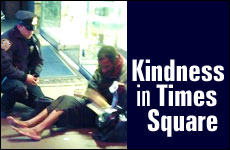 On a freezing, November night in Times Square, Officer Lawrence DePrimo was on a counterterrorism shift when he spotted a barefoot, homeless man. The policeman went into a Skecher's shoe store and bought him a pair of warm boots. He knelt down beside him and put the boots on his shivering feet. None of this would have been news if not for a tourist from Arizona who witnessed the scene and took a picture with her phone.

The photo was posted on the New York Police Department Facebook page last week and has been viewed 1.6 million times, receiving 275,000 'likes' and 16,000+ comments. Officer DePrimo was shocked; he had no idea that he was being photographed and that his photo had become an online sensation. 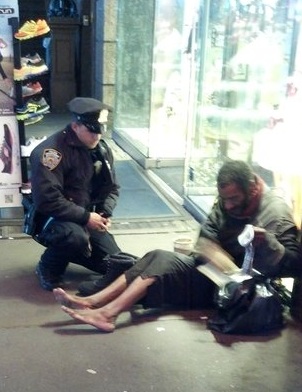 "It was freezing out and you could see the blisters on this man's feet,” Officer DePrimo said in an interview. “I had two pairs of socks and I was still cold. He was the most polite gentleman I had met. His face lit up when he saw the boots. As soon as the boots were on him, he went on his way, and I just went back to my post."

When I saw the photo, my initial admiration turned rapidly to guilt. I knew that if I had passed this homeless man in Times Square, I probably would not have even noticed him. I learned long ago to sidestep the cardboard boxes and ragged blankets. And the times when I stopped to drop a dollar into a cup, I may have noticed bare, freezing feet but there was no way I could buy boots for all of the homeless... so why buy just one pair? What difference would that small ripple make in the crisis of poverty all around me?

But that, I realized, was exactly the point. This officer made a ripple. A significant ripple. First he made a ripple in this particular man's life. He didn't just give him a pair of used boots. He went and bought him a $100 pair of boots. When he told the salesman what he was doing, the salesman gave DePrimo his own employee discount and sold him the boots for $75.

"We were just kind of shocked,” the salesman, Mr Caso said. “Most of us are New Yorkers and we just kind of pass by that kind of thing. Especially in this neighborhood." That was the next ripple.

Recently, I was increasing my running distance, and I started to notice that my lower back was hurting. I asked one of the trainers at the gym if there was something wrong with my running form. She explained that my form was fine, but I was missing sufficient core strength. Without enough core strength, you can't run very far.

This idea applies to our spiritual core as well. We can try to grow and improve in so many ways, but if we can't see someone who is shivering on the sidewalk right beside us, how far can we really go? Where is our essential, basic muscle of human kindness?

Core strength can be improved. After I saw the photo, I decided to reach out to a guest who I had been pushing off inviting until... Until I wasn't having a stressful week... Until my toddler's cough went away...Until I had time to make a gourmet meal… Until we moved into our new house..

Until, until, until I would no longer have the opportunity to help.

If DePrimo had a list of 'untils' there would be one more barefoot, homeless man suffering on the city streets. Just as the photo exploded on the web, maybe kindness itself can go viral. We can ask ourselves: Is there someone I know who needs a pair of shoes, a warm cup of coffee or maybe just a smile? Where is our core strength?

It's there in the photo of a police officer kneeling beside a shivering man in Times Square. And it's inside all of us, waiting to be used.

10 Rules for Perfecting the World

Cleaning Up the Inner River of Thought

God vs. Prozac
Why Are The Prayers Of Yom Kipur So Repetetive?
Ha'azinu 5783: A Time for Unity!
Twisted Thinking
Comments