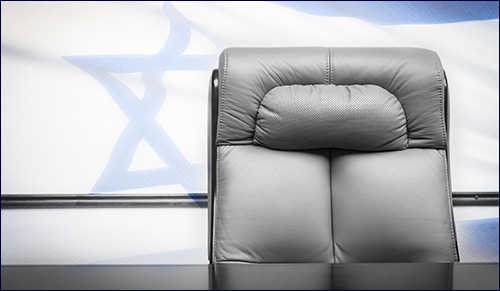 Israeli elections are looming once again which means that Israelis will be heading back to the polls on March 17th. Most experts are predicting that current Prime Minister Benjamin Netanyahu will once again lead the government. But politics in the Jewish State are notoriously volatile. Anything could happen really. So here are 8 out of the box possibilities for Israel’s next Prime Minister. Hey, you never know.

Itzik Smadar is a taxi driver in Beit Shemesh and he knows how to solve all of Israel’s problems!

Itzik Smadar is a taxi driver in Beit Shemesh and he knows how to solve all of Israel’s problems – he tells every passenger who gets into his cab all about it. Most of his solutions involve more people shopping at his cousin Dudu’s store in the local souk – he sells the best vegetables in the nation according to Itzik. Itzik does have some impressive skills in the fiscal management department which could help in the Knesset. For example, even though he lives in Beit Shemesh, which translated means, “House of the Sun” he refuses to use the air conditioning in his taxi as he claims that doing so saves him hundreds of shekels per year. So, vote for Itzik and vote for fiscal responsibility. And skyrocketing deodorant sales.

Famed mentalist Uri Geller has a mind so powerful that he is able to bend spoons just by thinking about it. Perhaps he can use this very powerful mind to solve the Israeli-Palestinian conflict? Or the poverty crisis in Israel? Or solve the conundrum of why Israelis love the squeegee so much. When Golda Meir was Prime Minister a reporter famously asked her what she saw for the future of the country and she replied, "Don't ask me, ask Uri Geller." So you see, it’s not such a crazy idea after all!

They say that politics and money go hand in hand so why not Shari Arison for PM? Shari is one of Israel’s richest people with a net worth estimated at around $5 billion. She is a partial owner of Bank Hapoalim and Carnival Cruise Lines and this experience could serve her well as Prime Minister. Maybe what Israel needs more of is a little bit of that Carnival Cruise Line spirit? More mid night buffets? More happy hour. More Norwolk virus? The mascot for Carnival is Fun Ship Freddy, maybe Israel needs a mascot to soften its image in the international community? Hummus Henry? Shwarma Shirley? Just an idea.

Haim Saban is also rich. He’s no Shari Arison but at a $3 billion net worth, we’d say he’s still “comfortable”. Haim Saban is a philanthropist and media mogul who is most famous for producing the live action children’s television series Power Rangers. In the series a group of teenagers battle the evil witch Rita Repulsa and her minions by morphing into powerful superheroes who wear color-coded skin-tight spandex suits and helmets with opaque visors. Maybe the IDF has it all wrong. Forget Kevlar, try spandex! Or, how great would it be to see Israel’s Ambassador to the United Nations battle Ban-Ki-Repulsa in spandex. And an opaque visor. Prime Minister Saban: spandex and opaque visors for all.

Gene Simmons is known for being the guitarist and co-lead singer of shock rock group KISS. He’s also known for having a long tongue. Simmons, is actually Israeli and was born Chaim Witz. Simmons is a strong supporter of Israel having called artists who refuse to perform in Israel “stupid” and termed the United Nations as “the most pathetic body on the face of the earth”. Come to think of it, perhaps Israel needs to change its tactics in defending itself against its foreign critics. Prime Minister Netanyahu’s cogent logical arguments are just too…cogent and logical. Maybe it’s time to get back to basics with some school yard tactics. Israel’s Prime Minister should just start sticking out his tongue at critics. And if there’s one man who has the tongue to stick out, it’s Gene Simmons.

Jews in general and Israelis in particular suffer from so many negative stereotypes. We control the media, the financial markets, we shrug our shoulders too much. And of course, don’t forget: we are bad at sports. If Israel is the “new Jew” as some argue, then perhaps an Israeli athlete as Prime Minister is the way to go. And who better to represent us than Omri Casspi, small forward for the Sacramento Kings. Casspi stands at 6”9 and is known for his aggressive defense and his mid-range jumper. He was also chosen to participate in the 2010 NBA All-Star Weekend H–O–R–S–E Competition against Kevin Durant and Rajon Rondo. Perhaps a Prime Minister Casspi can use this as a peace making tactic and challenge Khaled Mashal to a game of H-A-M-A-S. First one to get H-A-M-A-S loses Gaza?

Yes it’s true that in order to be Prime Minister if Israel you need to be Israeli, and yes it is true that Sean Hannity is not. But the guy is more pro-Israel than most pro-Israel people we know. Sean Hannity is of course the host of a nationally syndicated radio show called The Sean Hannity Show and of a cable news program called Hannity on the Fox News Channel. Hannity routinely demolishes anti-Israel guests as he did for example this summer when he interviewed Yousef Munayyer of the Jerusalem Fund and Palestine Center. You can watch the segment here but spoiler alert: it doesn’t end well for Yousef. Granted, Sean would have some hurdles to overcome such as learning Hebrew, converting to Judaism, becoming an Israeli citizen and learning how to play matkot (Israeli paddleball). But Prime Minister Hannity has a nice ring to it, doesn’t it? And it would make for great ratings.

Who doesn’t love the violin? It has such a beautiful and soothing tone. And probably everyone can agree that the tone in Israeli politics is anything but beautiful and could use a lot of soothing. Just imagine a Knesset meeting to debate a controversial new law that previously would have brought out recriminations and insults, but now a Prime Minister Perlman would open up with a little Beethoven concerto in D major. You can’t say no to Beethoven, especially in D major! Perhaps this approach could even be extended to peace efforts with the Palestinians. Mahmoud Abbas you aren’t interested in cracking down on Palestinian militant groups? Listen to Moonlight Sonata now! See if you can resist it –it’s in C major!

How to Enjoy Israeli Independence Day Like an Israeli

How To Make Your Next Chanukah Better