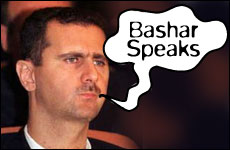 An exclusive interview with Bashar Assad.

Jewlarious.com recently had the opportunity to sit down for an exclusive interview with Syrian dictator, Bashar Assad. After living life in relative obscurity as a London-based ophthalmologist, Bashar Assad was summoned home to Damascus to take the place of his brother Rifat -- who had died in a mysterious car accident -- to train to ultimately replace his ailing father, Hafez Assad. When the senior Assad died in 2000, Bashar became President of Syria at the age of 34. This is one of his first interviews with a western media outlet.

Jewlarious: Bashar, thanks for being here.

Basher: Not at all. Thanks for having me.

J: Bashar, you have been a dictator for five years now.

B: Yeah. Six years ago. Time goes by. Hard to believe.

J: No. I mean, did you just say "Zichrono Livrocha"?

J: I could have sworn I just heard you say, "Zichrono Livrocha".

B: I have a kingdom to run and Sunnis to kill. Is this how you want to spend our time?

J: Ok, you have been a dictator for five years now.

J: Right, almost six, sorry. Do you miss the simpler life in London -- the life you had as an ophthalmologist?

B: Well, I was educated and trained as an ophthalmologist, but there is a lot of cross over to being a dictator.

I was educated and trained as an ophthalmologist, but there is a lot of cross over to being a dictator

B: First off, the pay is babkes.

B: I am experimenting with some Yiddish in my act.

B: Yeah, it cracks up the whole cabinet and Mrs. Assad bought me a snare drum for our anniversary so it gives me a chance to do proper rim-shots. Anyway, the pay is not great and the hours are long. Other than that, I guess it's not the same at all really. I always say, "You can't exercise quasi-control over Lebanon from a London LensCrafters."

J: You worked at LensCrafters?

B: The benefits were spectacular -- full dental for me and Fatima and three weeks vacation.

J: So, you and Fatima are in London and you are working at a LensCrafters...

B: One hour or free! It is like a Dominos but with the future ‘President' of Syria instead of a zit-faced delivery boy. And by the way, it's not Fatima, its Asma. You missed the joke. The idea was that I did not know my own wife's name. Where is that snare drum when you need it?

J: Ok, so you and Asma are in London and you are working at LensCrafters....

B: Yes. We were in London at LensCrafters, where the return policy is phenomenal! I bought a pair of bifocals in 1998 and returned them – no questions asked – in 2003. Anyway, I am at work one day, I get the call: "Rifat is dead". I thought that it was Cousin Faisal joking around. He's great at the pause/delay gag. "Rifat is dead.......set on becoming President of Syria!" Man does that guy have timing. Anyway, in this case, it turns out that Rifat was actually dead.

J: What were your first thoughts?

B: My first thought was, "Who is going to cover my shift?"

B: Yeah – it's hard to find ophthalmologists that will come into work on a Sunday. You call them at home and its "the wife, the kids – don't call me again!" Listen buddy, you have a job to do.

J: Ok, after that, what did you think?

B: Next I thought: "Is it possible to get a black suit in this mall on a Sunday" – Heyo!

J: Ok, so since you came to power, how have you changed Syria?

B: Well, first of all, profits at all Damascan LensCrafters are through the roof. Corporate couldn't be happier. We are set to open locations in Bosra, Qasin and Ma'aslulah next year. Do you know where I can find a few good ophthalmologists? I keep telling Asma, "Next year, I'll stop doing the exams myself".

J: Vis-a-vis Israel, where do you see that situation heading?

B: Oy, don't even ask. Hey-ho! It's interesting. The Marx brothers, Lenny Bruce, Woody Allen, Seinfeld, Adam Sandler – all great Jewish comedians, none of them Israelis? There is a problem in that country that they just don't want to deal with. We all worry so much about Israel, but America has all the funny Jews. You ever see that Gilbert Godfreed?

B: Fine. Let the world know! His whiny voice drives Asma and I nuts. We love him -- wanted him to play our President's day bash, but, ‘The Great Satan' puts all those travel restrictions on us.

J: Ok, so plans for the future?

B: Well, I want to get Asma's Asthma fixed – it's a pun! Hey-ho! And, of course, the sand-belt calls. I have two shows in Baghdad next week. Then, I am off to Qatar and Oman, before finishing right here at the Damascas Laugh Barn.

J: Any plans for the country at all?

B: Not really. I don't really govern by doing. I am more just a "try to consolidate and hold onto power" kind of guy.

J: How do you plan to do that?

B: I don't know, I wish my father – Zichrono Livrocha – had left a manual around.

B: Stop it with that mishugas again.

B: Such a nudnik. Get out of here. No. Seriously – get out of here, before I bust out the mustard gas. This interview is over. How do you say "enough" in Yiddish?

The Ten Commandments of Jewish Worry: Part 2
In the Shadow of David and Goliath
Where Do the Laws of Nature Come From?
Saadiah Gaon, Rashi and Maimonides: How Three Rabbis Revolutionized Judaism
Comments