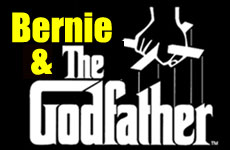 What do The Godfather movies and Bernie Madoff have in common?

For one thing, they both achieved the distinction of being known as the greatest in a particular category.

The Godfather, according to the ranking of Entertainment Weekly as well as countless other critics, tops the list as the greatest film ever made. Bernie Madoff, by virtue of the staggering billions he managed to steal from unsuspecting investors through his spectacular Ponzi scheme, gained his place at the very head of the list of financial con artists of history as the greatest and most successful swindler of all time.

Each one richly deserves its reputation, The Godfather for fame and Bernie Madoff for infamy.

Both also convey a profound, unifying moral message relevant to all. What made The Godfather strike such a universal response from its viewers? Although couched in the metaphor of the Italian Mafia, the philosophy of the mob and its henchmen was the acceptance of the Faustian bargain to sell one's soul to the devil for the sake of the dollar.

Scholars of cinema know that director Francis Ford Coppola originally refused the offer of Robert Evans, then head of Paramount Studios, to work on the film because he feared it might glorify the Mafia and its addiction to violence. He only changed his mind when he hit upon the idea of using the movie as a vehicle for making a statement about American capitalism. Only when we understand this motivation that drove Coppola can we truly grasp why this movie speaks so powerfully to us.

The Godfather is a morality tale camouflaged as a gangster movie.

The very excesses of crime and of killings, of corruption and lawlessness, of unspeakable violence and barbaric homicides delude us at first glance into thinking that we are merely witness to the depravity of others, people who are strangers to our codes of civility and honesty. We watch spellbound as a master storyteller spins a tale that on the surface has nothing to do with our own far less serious failings. But deep down we recognize that we are witness to the all too human tragedy of sinful temptation capable of destroying anyone in its wake.

The Godfather is a morality tale camouflaged as a gangster movie. It vividly shows us what happens when the desire for material success is divorced from any moral strictures. Watch, it warns us, how the American dream becomes a horrific nightmare when its worshipers ignore the inner spiritual needs of their souls -- even when those who seek gold over God attempt to maintain a veneer of respectability by grandiose financial gifts to the church or public displays of commitment to religious rites.

In one of the most brilliant and powerful scenes in the movie, we have the montage and abrupt shift back and forth from Michael standing in the church as godfather to Connie and Carlo’s newborn son, while a series of murders occur simultaneously at his command. The hymns of praise to God alternate with the screams of the brutally executed victims. All to make us understand that worshipping the dollar finds a way to live comfortably with both the Almighty and murder. Perhaps that is the ultimate irony of the title "Godfather" given to the man who serves as Capo di tutti capi , boss of all bosses, heading an empire of evil.

Coppola wants us to understand not only the cynicism but also the ultimate stupidity of this mistaken striving for material success. Those whose code name cosca means family -- seemingly the highest and most noble ideal of the Mafia organization -- insure by their lifestyle that the benefits of family find no home in their midst. Death is a frequent visitor to those they love the most. Intimacy is, of necessity, replaced by deceit. The paradigm of their marital relationships finds expression when Kay questions Michael whether he is in fact responsible for the assassination of Carlos. Just this one time, he tells her, he will let her ask him about his business dealings -- and then lies and assures her that he had nothing to do with the murder he actually commissioned.

The last of The Godfather trilogy ends in 1997, showing an aged Michael, seated alone in the front yard of his Sicilian villa. In a dream sequence, he recalls the loves of his life, their lives all violently cut short -- testimony to the truth that bloodshed begets only bloodshed, leaving but death in its wake. After slowly putting on a pair of sunglasses, he drops an orange from his hand. He slumps over in his chair, collapses to the ground, and dies completely alone.

When we leave this world we open our hands in recognition that we can take nothing with us.

The scene is reminiscent of a beautiful Midrash. The rabbis ask, why does a newborn infant come to this world with a closed fist but when a person dies the hands immediately open? They answer that is symbolic of the ultimate reality of life. When we enter this earth we clench our fingers together as if to say we are going to capture it all, we will grasp everything we can and hold on to it. But when we leave this world we open our hands in recognition that we can take nothing with us, that everything we accumulated leaves us at the moment of our parting. The only items of significance that we can bring with us to the other world are our good deeds; the only things of value we can leave behind are memories of love, kindness and benevolence.

Click below to watch a clip from The Godfather. (Article continues below.)

Jewish tradition teaches that after death we are asked a series of questions by the heavenly court. It is a final examination with far more than a grade at stake; our place in eternity depends upon our answers. And the very first question put to us epitomizes the essence of religion: “Did you deal honestly with others in the conduct of your business?”

It is most significantly in our business dealings that we demonstrate our true character. How we act in our shop is what we bring home to our families. And the effects of our decisions in our places of work define the messages we send to our mates, to our children, and to our communities. To the extent that we succeed ethically at work we sow the only possible seeds for the survival of our loved ones. Indeed, when a person makes the false distinction between business and family, the family is at risk of being destroyed.

"It's strictly business” -- a credo that justifies anything in the name of the holy “bottom line.”

The Godfather is famous for a line that has been much repeated as a “signature statement” not only for the Mafia but for all too many supposed role models for American success. When Michael proposes a hit on two of his enemies he says, "It's not personal, Sonny. It's strictly business.” It is a credo that justifies anything in the name of the holy “bottom line.” As if religion, morality, scruples and ethics have no place in the real world of a capitalistic society, of money and of commerce.

Shades of Bernie Madoff and all the con men like him who have polluted our world and put to shame our claim to spiritual progress.

Bernie may have seen The Godfather but he didn't understand the moral. Like Michael, he too now finds himself totally alone. For those who may feel a modicum of envy at all the luxuries Bernie enjoyed at the height of his rise to unimaginable wealth, it's important to remember that no one can escape the consequences of a life lived in a way that always puts the personal subservient to the demands of business. Faust's deal with the devil is guaranteed to make us pay very dearly for our willingness to trade away our souls. Madoff made off with the money but got very little for it in the end.

The conclusion of The Godfather trilogy and the Bernie Madoff fiasco are similar; both end with loss, shame and disgrace.

And the reason is simple: the real bottom line of our lives is that we are ultimately responsible to the true "boss of bosses," our God-Father in heaven.

The Kippah on Beale Street
The Blue Beyond
Great Place to Live
Is Eating Supposed To Be Spiritual?
Comments
MOST POPULAR IN Jewlarious
Our privacy policy