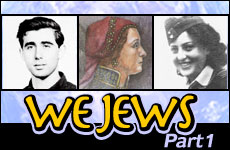 A new series that will make you kvell.

I am pleased to announce a new series titled: “We Jews: Unsung Heroes.” Here we are, 1/4 of 1% of the world, yet the number of Jews who have changed history makes Brazil look like the Bronx. I think there’s a story here -- let me know if you agree. I hope this series evokes kvells, naches, and “cries” over the joys and oys of our intricate, exquisite tapestry of the history of “We Jews.”

Dona Gracia Nasi, born in Lisbon in 1510, was a converso, married to another converso, Francisco Mendes, in 1528. The affluent couple provided escape routes for Jews victimized by the Inquisition. After Francisco died, she partnered with her bro-in-law in Antwerp, who bequeathed her everything in 1542. In Turkey, she could finally practice Judaism openly – and more. She created an underground railroad from Portugal for conversos to leave. Settling with her daughter in Constantinople, she was guardian angel of the Jewish community, which included confronting Pope Paul IV about his anti-Semitic policies. In 1558, the “mogela” arranged with the Turkish sultan to buy the city of Tiberias, hoping to make it an independent Jewish city-state!

Luis de Carvajal Hundreds of years before Jews made their homes in the American Southwest, Luis de Carvajal and his family, forced to be crypto-Jews, arrived in Mexico in 1580. His records are the sole surviving Jewish writings of the Spanish colonial period. Not only did Luis circumcise himself, but the family actively encouraged other crypto-Jews in Mexico City to return to Judaism. In 1596, Luis, charged as "judaizante relapso pertinaz" (a perpetual, relapsed Judaizer), was burned at the stake, along with his mother, and three of his sisters.

She died at 23 ... a Jewish Joan of Arc. Paratrooper, poetess, and hero, during WW ll, Hannah Senesh, born in 1921, parashooted behind Nazi lines to warn Hungarian Jews of the Nazi scourge. As a young, ardent Zionist, Hannah moved to Palestine, writing, “I am fulfilling a mission.” In 1943, she was the first woman Britain trained as a paratrooper. While trying to free POWs Hannah was captured, sent to Budapest, and tortured. Refusing to reveal her radio code, Hannah was executed on November 7, 1944 and buried in the military cemetery in Jerusalem. My God, My God, may these things never end: the sand and the sea, the rush of the waves, the lightning of the sky, the prayers of humankind. – Hannah Senesh

These words, part of a poem, became a Hebrew song.

Rudolph Vrba, born in 1924, a distinguished pharmacology professor at the University of British Columbia – and one of the few Jews to escape from Auschwitz, provided the first eyewitness evidence of the extent of the Holocaust, and the precise mechanics of Nazi exterminations. The 32-page report, (The Auschwitz Protocol), was later used as evidence at the Nuremberg trials.

Rivka Gruber I have taught my sons to be good Jews .To battle for that which is right until the last breath, for man is duty-bound to fight for what he holds dear in life. – Rivka Gruber

On May 14, 1979, when the Israel-Egypt peace treaty was signed, Rivka Gruber, was among the dignitaries. A pioneer settler in Eretz Israel, Rivka joined a Jewish Battalion. Her son Ephraim, joined the Haganah and was killed two months before the establishment of the State of Israel. Her other son, 16-year-old Zvi, was killed in battle with the Egyptians three months later. Rivka moved to a remote region of Israel, teaching others to transform the area into a thriving sector.

On May 24, 1991, Operation Solomon, the mission to rescue thousands of Ethiopian Jews, was almost aborted but for the fast thinking of its mastermind, Israeli ambassador Uri Lubrani. The Operation hinged on the transfer of $35 million to the Ethiopians. But, when the planes had left Addis Ababa for Israel, the gelt had “gone missing!” An Ethiopian “un”-civil service foul up? You bet. They couldn’t find the bank account number! Within an hour, Uri, tracing from Israel, Ethiopia, and New York, “untangled” the mess – and rescued 14, 500 Jews!

The year was 1964. Young Andrew Goodman said, “Mom ... I have to go,” recalled Dr. Carolyn Goodman. “It wasn't easy for us. But we couldn't talk out of both sides of our mouths. So I had to let him go.” One day after his arrival in Mississippi, Goodman, fellow Jew, Michael Schwerner, and African-American, James Chaney, were beaten and shot by Klansmen in Neshoba County, Mississippi. It took 41 years to the day (June 21, 2005), for the 80-year-old Klansman organizer, Killen to receive three 20- year consecutive prison terms. The case hastened the passage of the Civil Rights Act of 1964, and has been memorialized in books and films, such as “Mississippi Burning.”

The verdict was about justice. I don’t believe in capital punishment and my wonderful son would have agreed. He was raised to believe we are a country of laws and to do the right thing. – Dr. Carolyn Goodman, talking with me in 2006.

When, in August 2005, Hurricane Katrina ravaged the Gulf Coast, the Jewish community stepped forward mightily, saving lives, raising funds, and opening their homes. More, in a daring rescue operation, a coalition of Jewish agencies waded through toxic waters to save 25 Torah scrolls in the New Orleans area, some of which had also been rescued from the Holocaust, “surviving yet a second horrific disaster,” said Rabbi David Saperstein, director of the Washington-based Religious Action Center. Chabad officials, were involved in the rescue. Said Rabbi Zelig Rivkin, director of Chabad Lubavitch of Louisiana, "Katrina has destroyed our homes, synagogues, and our city but has not destroyed our community.”

On Monday, April 16th, 2007, Virginia Tech student, Cho Seung-Hui, senselessly murdered 32 classmates and teachers, then killed himself. One of the victims was Israeli professor, Dr. Liviu Librescu. Librescu, 76, barricaded the door of his classroom, allowing students to escape through windows. Cho Seung-Hui shot and killed Dr. Librescu through the door. Horrifically ironic, Librescu, a Holocaust survivor from Romania, died on Yom HaShoah. His family was determined that Dr. Librescu be buried according to Jewish law in Israel, which required transport as soon as possible. Officials rallied. On Tuesday, the Virginia State Police escorted the remains to Alexandria, Virginia, where a team of rabbis, expert in the rituals of transporting, was waiting to drive to New York, with troopers in each State as escorts. By Wednesday, the slain hero was bound for Israel, where he was buried in Raanana on Friday.

One Drink Too Many: My Journey of Breaking Free from Alcohol
The Scandalous History of the Aleppo Codex
Who was Two-Gun Cohen?
Why Really Everyone Believes in Free Will
Should Jews Support Ukraine?
The Jews of Cuba
Comments
MOST POPULAR IN Cool Stuff
Our privacy policy