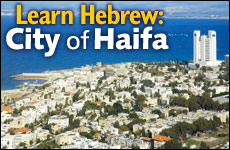 A beautiful combination of blue sea and green mountains.

Israel's third-largest city, Haifa, full of diversity, heterogeneity and harmony; a city of unique people and glorious beauty. Located on the slopes of Mount Carmel (

), and surrounded by the Mediterranean Sea, Haifa (Cheifa -

) is the largest and most important city in northern Israel.

Israelis call Haifa the city of the laborers (

-- ir hapo'alim), or the Sleeping Beauty. A popular phrase says: "Haifa works, Jerusalem prays, and Tel-Aviv plays." It all began with one of nature's gifts to the city of the Carmel (

) -- a large. natural bay that brought much industry and employment to Haifa during the modern era. Haifa is home to two oil refineries (built by the British in the 1930s) and its port is the oldest of the three major ports in Israel. Approximately one million people live In Haifa and its vicinity, supporting a major part of Israel's industrial backbone. 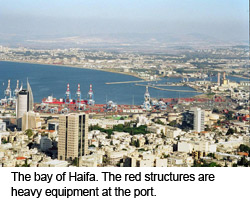 Haifa's history dates back to the Late Bronze Age (14th century BCE) when it functioned as a small port city. During biblical times, the Prophet Elijah (

) conducted a contest of power on Mount Carmel -- between the pagan gods (Ba'al) and the God of Israel. After the pagan prophets prayed without success, Elijah asked God to accept his sacrifice -- and fire fell from the sky, igniting the sacrifice.

Elijah the prophet brought much diversity to Haifa: The Carmelites made Haifa their center, as they saw Elijah as the one who brought God's light and took away the pagan darkness. They built a monastery and a church next to Elijah's cave, in which it is believed that Elijah hid from the Ba'al believers and from King Ahav.

Haifa is known for the coexistence of a large variety of religions and people. There are religious and secular Jews, Christian-Arabs and Muslim-Arabs, Druse, Bahai, and Christians living together in relative peace and harmony. Around the month of December, Haifa celebrates the "Holiday of Holidays Festival" (

) -- a festival that reflects the human mosaic of Haifa's residents and the good relationships amongst its diverse population. 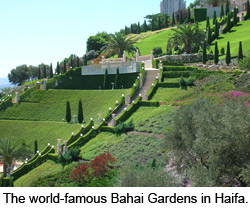 Haifa is closely associated with the Bahai faith -- a monotheistic religion founded by Bahaullah in the 19th century in Persia. The Bahai World Center is located in Haifa. The headquarters of the Bahai are in Haifa because Israel's liberal democracy is the only country in the Middle East where a Bahai Temple is allowed. The northern slope of Mount Carmel is decorated with the hanging gardens that were planned and built by the Bahai devotees. These beautiful gardens were proclaimed a UNESCO World Heritage Site.

The origin of the name Haifa is unclear. It might have come from the Hebrew root which means "to cover or shield," referring to Mount Carmel that covers Haifa. It might also be a conjunction of the words " 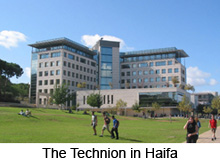 (was founded in the early 20th century as a school of engineering and science. It was the only higher learning institution in Israel during the Ottoman period (together with the Bezalel Academy of Art in Jerusalem). Around 1912 there was a major debate regarding the language of instruction: at that time, Hebrew was considered inappropriate for scientific studies and it was proposed to teach in German. Eventually, the Hebrew language was adopted. The original building of the Technion later became the Israel National Museum of Science, Technology and Space -- called

Wherever you look in Haifa, you can find beauty -- the beaches, the bay, the blue sea and the green mountains. The climate is relatively good due to the breeze from the sea and the height of the mountains. It is a wonderful place to live, love, study and work -- and a relaxing and interesting place to visit.

A girl's name, derived of the name Carmel, which means "vineyards and orchards" or "roasted grains."

A boy's name, from the Bible, composed of the word 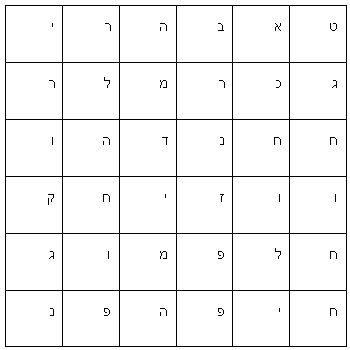