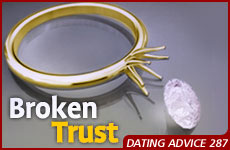 He was unfaithful following the engagement. Is it 100% over?

I recently ended my engagement to the man I thought was the love of my life. We dated on and off for a year before becoming engaged. The two months that followed were mostly blissful, with some fights from "wedding plan stress." I ended the engagement because my fiancé was unfaithful, something I never could have imagined he would do.

I became much more Jewishly involved while the two of us were dating, and I thought that we were going to have a life based on shared religious values. My ex's surprising actions showed me that he does not have the values I want my husband to live by. Of course, now he says that he regrets what he did, and swears that he is making significant lifestyle changes, and will do anything to be with me. But even if he does all of this, I am not sure I can get over what he did.

If my former fiancé shows clear progress in his growth, should I try to move past his actions, forgive him and start a clean slate? Is cheating forgivable? Or should I just try my best to fall out of love with him (it's very hard for me to get over him) and hope and pray I'll meet the right one at a later time? Thanks so much!

You asked us if it's possible for a relationship to be rebuilt after it's been broken by a serious breach of trust. Our answer is a qualified "yes." It isn't easy to get over a breach of trust by someone you love, because that trust has to be re-earned at a much higher price than it was initially acquired.

How does a couple develop trust in the first place? It begins when two people gradually get to know each other, share their hopes and dreams, show respect for each other, and give each other a sense of safety so they can reveal their vulnerabilities to each other. Each person demonstrates a willingness to honor the shared expectations and understandings that develop between them.

When you became engaged, that was a commitment between you two that your relationship was exclusive. You probably came to this understanding long before your actual engagement. By being "unfaithful", as you put it (and we assume that this means being intimately involved with someone else), your fiancé breached this promise. That betrayal may be very difficult for you to come to terms with.

Did he express regret only after you caught him?

Before you even can consider rebuilding your relationship, we'd like you to answer some questions about the circumstances of your fiancé's lapse. Was his indiscretion a one-time lapse, or was he actually seeing someone else for a while? Was the other person someone he dated in the past, perhaps during one of the "off" periods in your relationship? Was exclusivity or dating other people an issue any time before you became engaged? Did he feel guilty about his actions and "confess" to you, or did he express regret only after you caught him? Was his cheating related at all to the stress of your engagement?

Some of the answers might indicate that this man wasn't really committed to your relationship or that he has a hard time with the concept of exclusivity. Or, he may not have learned appropriate ways to deal with stress. And it may be that he isn't sure if he feels ready for marriage. In any of these cases, he would need to address these issues before he can be ready to begin to rebuild your relationship. And even if he immediately and deeply regretted his mistake -- agonizing over telling you because he knew you would be hurt, and tearfully admitting what he'd done and apologized -- he will still have to understand why he did so and how he can avoid this in the future.

We wouldn't encourage you trying to get back together with him unless you see that he's making an active effort to understand himself, clarify what he wants out of life and from your marriage, and find the path he'd like to follow. Examining his life philosophy may help him gain some of the understanding and clarity he needs, but it has to be accompanied with other concrete changes. And even then, there is no guarantee that he won't slip in the future, just as there is no guarantee that any human being won't experience a significant lapse in judgment sometime in life. This is where you'll have to gauge your level of rebuilt trust. Only you will know if and when he has done enough personal growth for you to trust him again.

One key indicator of where this is all heading is whether he has already begun the process of growing and changing, or if he's waiting for your reaction before he starts. If it's the former, you should both view this as a process, and it will take time for him to acquire the clarity to be sure that he really wants to follow the direction he's chosen. You'll have to decide for yourself if you want to wait and watch the process unfold, or if you prefer to move on.

Is he waiting for your reaction before he starts to change?

If it's the latter (i.e. he's waiting for your response), then he probably isn't sincere enough about changing or mature enough for marriage. Or he may not know what he really wants out of life. Enduring marriages are built on a foundation of shared values and compatible goals, and if he adopts your views because he doesn't have his own, then he doesn't know enough about himself for that foundation to be solid.

If you decide that, in spite of your feelings for him, you don't have the basis on which to build a marriage, it will take time to grieve for your loss and decide that you're ready to move on. One suggestion that can help this process is to acknowledge your pain, and to admit that even though you may love him, he wasn't the right marriage partner for you. Another way to help your own healing is to find a creative or athletic outlet to help you work through your feelings.

It may take time for you to let go of the hope that at some point in the future you and your ex might get back together. That's an important step to take, because that hope can keep you from emotionally investing in a new relationship. And that hope ignores the fact that if your paths do cross in the future, the two of you may have become very different people who are not at all suited for each other.

Dating Advice #168: Up, Up and Away
Who Was Josephus? The Controversial Backstory of the Famed Historian
Should I Break Up, Get Engaged or Keep Dating?
Time Is Your Precious Commodity
Comments
MOST POPULAR IN Dating
Our privacy policy