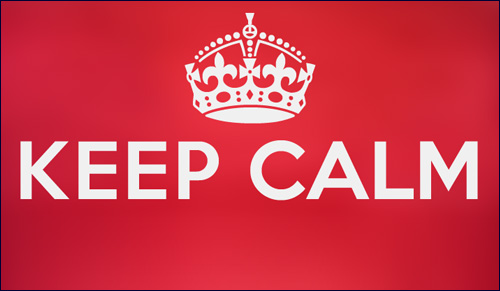 I aspire to keep calm and not react. One time I actually succeeded.

One of the famous “Keep Calm” versions of the saying that adorn t-shirts, mugs and other ephemera is “Keep Calm and Let Karma Finish.”

I’m not so sure if calm creates good karma, but calm may help decide the fate of your present existence following one of life’s hair-raising, emotion-rising dramas.

“Keep Calm and Carry On” – the original saying – holds true as a would-be mantra for my life. To respond and not to react is something to which I aspire. Sometimes I can actually achieve it, but more often than not, I keep aspiring.

I will never forget one episode of keeping calm involving my kids, Zach and Samuel (I’m using pseudonyms to protect the innocent).

Zach was about to go on a school trip, his first out-of-town journey, not counting sleep-away camp. It was big deal to be with classmates, to explore a brand new city, and have fun staying in a hotel. The trip was to Boston and the class was to travel by bus, a long journey from our home. Many of the students had their devices packed along to occupy and entertain themselves on the long drive there.

Zach wanted to borrow Sam’s iPod for the long bus ride, promising that he would be really, really careful not to lose, break or mess it up in any way. With that condition Sam agreed to lend his iPod and off Zach went to Boston.

When he returned there were plenty of stories and adventures to tell, but, alas, there was no iPod. Oy!

Knowing how Zach would be self-punishing, and knowing how hard it was for him to make sure that the iPod didn’t disappear, I decided to be very calm about the loss. And I asked Sam to do the same; don’t berate your brother.

Sure there would be plenty of time for lectures or lessons about responsibility and care of objects, but somehow, I decided not to react, but to respond, and not make Zach feel worse for the wear.

Then I remembered a story I had read.

Then a few days later, she found the diamond! She thought it was gone, flushed away forever. But there it appeared at the bottom of the bowl. She was thrilled to recover her diamond, but she was even more happy about how she behaved toward her husband. How she chose calm, instead of chaotic drama. That she was actually able to transcend her natural inclination and not freak out.

I remembered that story days after Zach’s return from Boston.

I remembered that story when I was emptying out the blue travel bag packed with clothes. Inside a small, slim, side pocket, a place I would not normally check or look, there it was. The iPod! Returned safe and sound. Never lost in the first place.

Zach had put it away so well that its packing place was forgotten.

I wondered whether we found it because of karma. Calm karma.

A version of this story originally appeared in About Our Children, the parenting magazine for the Jewish Standard, published by Jewish Media Group.

Heidi Mae Bratt is an award-winning journalist and the editor of About Our Children, the parenting magazine for the Jewish Standard.

A Bat Mitzvah to Remember

A Doctor's Life: A Tribute to My Brilliant Father
What Makes Eli Run?
The Tyranny of Materialism
Science Enters the Mysterious Inner World of Consciousness
Comments
MOST POPULAR IN Family
Our privacy policy