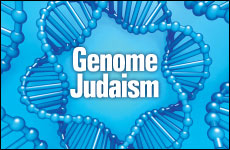 All Jews are connected.

I recently spoke at an event in Toronto, and afterwards, a mother and daughter came up to chat with me. I thought they might want to discuss the evening’s lecture, but they had a more personal issue to broach: they had spent years mapping their family tree and they thought we might be related.

The mother filled me in on some of her findings: she had traced her family back hundreds of years and had mapped many of its members, taking particular delight in telling me about a few who were especially noteworthy or interesting.

I listened, fascinated, but couldn’t help glancing over at her daughter as she spoke. The daughter was about my age, standing patiently listening to her mother’s findings. But to me her face was even more intriguing. She looked so familiar. I was sure that I’d seen her before.

Later, after we had exchanged e-mail addresses and promised to be in touch, it hit me: the daughter was the spitting image of one of the mothers I know from my kids’ Jewish day school. Living in separate cities, in separate countries, unknown to each other, the two women were practically identical.

She and I might be eighth or ninth cousins, according to her mother’s genealogical research, but judging purely by resemblance, she was a much closer relative to the woman from my children’s school whom she never met.

All Jews are Siblings

There is a Jewish saying: “All Jews are siblings.” This is intended metaphorically: All Jews, including converts to Judaism, are united by a shared history, culture, religion, and love of God and Torah. We are bound together as if brothers and sisters.

Beyond this, after 4,000 years as a distinct people, we are quite literally “brothers and sisters,” based on a shared genetic pool.

Modern genetic testing bears this out. Scientists have found that Jewish populations all over the world share more in common with each other genetically than they do with other, non-Jewish, populations residing nearby.

Scientists have found that Jewish women from all over the world over can trace their descent to approximately just eight women who lived in ancient times.

And when we look at Ashkenazi Jews (of northern and eastern European origin) women, the pool becomes even smaller: fully 40% of Ashkenazi Jewish women trace their ancestry directly to one of only four female ancestors who moved to Europe about 2,000 years ago, around the time of the Roman expulsion of Jews from Israel.

Jewish men have not been left out of the current wave of genetic testing. For example, the biblical Aaron and his descendents (the “Kohanim”) were in charge of the sacrificial service. Membership in the Kohen tribe was – and still is, thousands of years later – passed down from father to son. Amazingly, Y chromosome testing has revealed the existence of a “Kohen” gene: a common set of genetic markers in both Ashkenazi and Sephardi Jewish communities the world over.

My grandmother, of blessed memory, grew up in Vienna. After she was widowed, she married for a second time: a Jewish widower who was also from Vienna.

Once I began to regard everyone as a distant relative, I found it a lot easier to like them.

One rainy day, my grandmother and her second husband worked out their genealogies – and discovered they were distant cousins. I was a kid at the time, and was amazed at this staggering coincidence. I remember my grandparents looking at me with bemused smiles, and telling me it wasn’t so amazing. After all, the Jewish population in Vienna was never very large.

I’ve thought of their words many times over the years. If my grandparents were distant cousins, then it doesn’t seem so strange that many others might be long-lost cousins as well.

Growing up, it was always a special event getting together with my cousins. We might not have otherwise chosen to be friends, but we knew we shared a deep, common bond, and till today we stay fondly in touch.

This mode of thinking has a profound affect on the way I relate to my fellow Jews. Once I began to regard everyone as a distant relative, I found it a lot easier to like them, relate to them, and care for them. I now find myself affectionately relating to others in my community as cousins – whose genetic link I have yet to discover.

The Sages teach us that Jewish unity was a prerequisite for receiving the Torah at Mount Sinai, and will be a prerequisite for the ultimate Messianic redemption. At times, it seems so hard to connect and relate to Jews of all stripes and sizes. Yet modern genetic testing gives us a scientific basis for understanding what our Jewish tradition already teaches: that all Jews are part of one family, one unit.

As the woman I met in Toronto remarked: “It seems we might have a common ancestor.” Indeed we do.