Judaism and the Human Genome Project 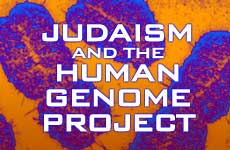 Now that we have the "genetic operating manual" for homo sapiens, where will it take us?

"Today," President Clinton declared at a recent White House ceremony, "we are learning the language in which God created life."

No, he didn't mean Hebrew, although that would have been a nice touch. Clinton was referring to the human genome, the multi-billion-letter "operating manual" for homo sapiens that scientists have finally deciphered -- surely the most eagerly awaited literary release this side of Harry Potter.

This cracking of the genetic code promises to revolutionize medicine, but it also raises a host of moral and ethical questions that Judaism speaks to. The genome, for example, will no doubt help us better understand human behavior -- and misbehavior -- by identifying its genetic components. Consider where that might take us. Fast-forward to the year 2015: Is it farfetched to imagine, say, enterprising defense attorneys concocting "genetic defenses" for their clients?

Judaism wouldn't buy it. Our tradition maintains that biology is not destiny, and therefore holds people accountable for their actions -- whether or not they have whatever syndrome is momentarily fashionable. There are legitimate mitigating factors, of course, such as mental incompetence, but Judaism otherwise consistently affirms the ability of people to exercise their free will and make moral choices. In fact, in general the Talmud says a person is always liable for his actions, whether awake or asleep.

Unfortunately, Judaism's position runs counter to a growing societal tendency to diminish personal accountability, often using medical or psychological "explanations" to excuse evil deeds. Does the term "Twinkie defense" ring a bell? That argument was used in a celebrated 1978 case by an attorney who maintained that his client was driven to commit murder by his addiction to junk food.

Time will tell whether the human genome is abused in this and other ways. The possibilities are endless. Will it be used, for example, to invade individual privacy through the unauthorized release of sensitive genetic information? Moreover, will man use it to play God through selective breeding or the engineering of desirable traits?

As for privacy, Judaism certainly values it -- to the extent that it opposes even subtle forms of snooping. The Torah speaks of the evil prophet Bilaam praising the Israelites for dwelling arrangements that prevented unwanted intrusions and other invasions of privacy.

No one is fit to play God, genome-enhanced expertise notwithstanding.

Finally, and perhaps most importantly, no one is fit to play God, genome-enhanced expertise notwithstanding. This category, however, does not include a wide range of scientific endeavors, such as legitimate medical intervention and research, which Judaism encourages. The human genome promises to be an invaluable tool in this area. What Judaism discourages is interfering with God's natural plan for no good reason. This theme is reflected in the Torah, which forbids the mixing of distinct plant and animal species. Disrupting the natural order is not only arrogant; it can be downright dangerous, too. It's common sense. It's also the law -- the law of unintended consequences.

Egyptology in the Torah: Biblical Archeology
The Grand Mufti of Jerusalem and the Holocaust
The Connection between Israel and the Jewish People
Grit and Torah
Comments
MOST POPULAR IN Current Issues
Our privacy policy