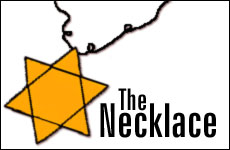 The true meaning of loving your fellow Jew.

Last week when those eight yeshiva boys in Jerusalem were murdered, I felt so sad and sick that I couldn't shake off my despair -- the endless barrage of Sderot, the escalation of bombing Ashkelon, and now this.

When I went to work teaching the next day, I did everything I could to hold back my tears and try to act "professional." But then I showed my class a film about Anne Frank. There were scenes of Jews being taken away and beaten. It was too much. By the time my next class came in, the tears were beating against the rims of my eyes just waiting to get out. When a student asked me, "Mrs. Frankel, are you okay?" The waterworks began and I had to explain that I wasn't.

Why do I feel such despair over something that happened to eight boys I don't even know? To a town I've never even been to? To the mere thought of people who died over 60 years ago that I obviously never met? The answer is easy -- I am a Jew.

An important element of being part of the Jewish people is trying to fulfill the commandment of Ahavat Yisrael. Yes, it means to love our fellow Jews (and not just the ones you agree with on political or theological matters), but it means so much more.

We are a family. We celebrate each other's joys and share in each other's sorrows. And most importantly, when our fellow Jews need our help, we are there for them. Whether in prayer or action, when Jews truly care about each other, we can literally change the world. And I know. The necklace proves it.

I was only seven years old, when God first planted the seeds for me to fully understand the mitzvah of Ahavat Yisrael, loving your fellow Jew. Let me set the scene for you: Early to mid 1970's, Nixon in the White House, scandal in the air, protests in the streets and oppressed Jews in the Soviet Union. Out of all of the above, the one thing that I was most aware of in the second grade was the dire situation involving the Jews in the Soviet Union. At the rallies to draw attention to the plight of our brothers and sisters in the Soviet Union our family regularly attended, my dad gave fiery inspirational speeches. But it wasn't all talk. By their actions -- going to the Soviet Union and meeting with refusniks* , housing a former refusnik in our home until the rest of his family could get out, and so much more, my parents taught me an important component of Ahavat Yisrael.

Which brings us back to the necklace.

My little friends and I vowed that we wouldn't take off our necklaces until "our person was free."

In the early 1970's, there was a big trend in the Jewish communities for people to wear a necklace with a large yellow star that had the name of a Soviet Jewish dissident on it. It was similar to the bracelets worn for different causes today. Back then my little friends and I vowed that we wouldn't take off our necklaces until "our person was free."

This lasted about three months until in frustration (three months is a really long time for a 2nd grader and I couldn't believe that it was taking so long for "them" to let him out!), I took off the necklace and put it away in my ballerina musical jewelry box. As I became a teenager, I took the ballerina music box from the top of my drawers and lovingly placed it in the very back of my closet. When we moved, the jewelry box went from the back of the old closet to the back of the new closet. And I didn't really think of it again.

Then in 1980, in the fall of my 11th grade year, I was chosen as one of two Denver area high school students to present a recently released Soviet Jewish prisoner with a special JNF trees certificate in his honor, "from all of the Jewish teens of Denver." It was rare and exciting to have such a person come to Denver, and we couldn't believe that we were picked for this privilege. We needed to simply sit with the adults while they made their speeches, including one from our Soviet Jewish guest of honor, and afterwards present our certificate. Pretty simple, except for one huge problem... What would I wear??

I tried everything in my closet on, and when finally satisfied, waded through all the discarded clothes strewn across the floor to get to the door. My father was trying to hurry me along because now we were late.

As we were driving to the synagogue where the event was taking place, my father was discussing how wonderful it would be for me to meet this Jewish hero. I was excited, but then I realized I didn't even know the name of the man I was honoring! "His name is Mark Dymshitz."

"Really, Dad? You've got to stop the car and go back home, now!" I remembered his name from when I was young, because, well as kid, that's not the kind of name you forget.

As we pulled in the driveway, I ran in the house and headed straight for my room. After rummaging around my extremely messy closet, I finally saw it . . .my ballerina jewelry box. Even though it sat at the bottom of my closet for almost 10 years, the ballerina still perked up and danced to the music when I opened the lid. Then I spied it, the big yellow star necklace. I grabbed my treasure and headed back to the car. Now we were really late and my father sped ahead, looking at me like, "I hope that whatever that was about was worth it."

"Mr. Dymshitz, I've waited almost ten years to give this to you."

When we arrived at the synagogue, I was ushered to the stage with all the other people making presentations to Mr. Dymshitz. After the few speeches, including the one by our guest of honor, the other teen representative and I presented our tree certificate to Mr. Dymshitz. He seemed quite moved. Then I said, "Mr. Dymshitz, I have one more thing to present to you. Many years ago, the American Jewish community wore necklaces, each with a name of a Soviet Jewish prisoner on them, to keep your names alive in our hearts. I always wore mine in hopes that the man whose name was on my necklace would soon be released."

As he took the necklace and looked at the name, tears welled up in his eyes and his smile showed me how important it was for him to know that some person, a little girl that he hadn't even known, had been thinking of him.

Choking back my own tears, I continued. "Mr. Dymshitz, I've waited almost ten years to give this to you."

It was the true meaning of Ahavat Yisrael.

*Jews who tried to leave the USSR were not only refused exit visas, they were often harassed, beaten up, left jobless and sometimes even jailed. Their major crime was wanting to live in a place where they could freely learn about and practice their religion.

If You’re Not Happy and You Know It

Surveillance
Seeing Without Eyes
Why Shouldn’t We Eat Whatever We Want?
The Power Of Prayer
Comments
MOST POPULAR IN Family
Our privacy policy
Aish.com Is Looking for Great Writers