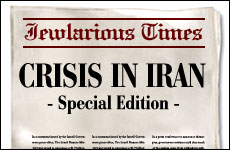 The Mullahs have ejected all foreign journalists from reporting inside Iran. Except one – Jewlarious.

Analysts are calling recent concessions by embattled Iranian President Mahmoud Ahmadinejad "unprecedented" and "encouraging." On Thursday, the Iranian hardliner spoke to his countrymen via a national address and announced a series of "carrots and sticks" for protestors if they would "return to and accept a life in which they have no rights at all". Ahmadinejad's four point plan, which American commentator John Zogby called, "ambitious," includes the following:

Speaking on Iran's top-rated news program, "Beat the Press" Ahmadinejad went even further, telling all Iranians, "After manipulating the election results to stay in power and continuing to crush your collective wills to live, and having seen your protests which I will destroy with an iron fist in the name of Allah, I have learned a great deal." Ahmadinejad continued, "The time has come for change. I have presented my four point plan and now I add two bonus points. I promise that we will leave four fingers on every protestor's hand and that we will reduce all prison mini-bar prices by ten percent. Seven dollars for a small can of Pringles is outrageous and adds insult to internal injuries."

Later, in an exclusive interview with Jewlarious' sister station Al-Jewlarious Ahmadinejad quipped, "Those who express opposing views will still be arrested and tortured, but they can expect that prison conditions will be like the Hilton – the Hanoi Hilton that is." Then, Ahmadinejad sounded an optimistic note, "Maybe some positive will come out of this? Maybe one day, our people will look at this silly ‘teenage' rebellion and realize that it distracted us all from our most important work -- threatening the west with nuclear weapons."

With Tehran's streets ablaze, the Chinese government is stepping up to the plate, promising to send $100M in aid and one million riot police to the Islamic Republic. Hu Xiaodi, Head of the Chinese Security Forces told Jewlarious, "We will send as many riot policeman as they need, so long as we have enough left to forcibly put down any rebellion, great or small, in our own country." Then, Xiaodi added, "Do you find it the slightest bit ironic that our military is called the People's Liberation Army? I know I do."

Do you find it the slightest bit ironic that our military is called the People's Liberation Army?

Military analysts the world over have been speculating that China, with a 2.5 million strong standing military, will need to find a way to put their restless forces to work. Xiaodi told Jewlarious, "We trained for the Olympics for so long. We were so proud when not one of our billion-plus people was able to voice an opinion or show any dissent during the Olympic Games. However, since then, our men have become bored. We have done such a good job at frightening students and arresting innocent civilians that there just are not enough beatings available to satisfy 2.5 million soldiers. So, we are off to Iran!"

As a first step in launching this comprehensive aid agreement, China will be sending 500,000 batons and billy-clubs to Iran. Said Xiaodi, "Look, we have a surplus. They have all been lightly used. We realized that we could either give them to the Salvation Army or the Iranian army? In the end, who do you think we chose?" For its part, Iran is excited about the possibility of receiving financial aid, but more so manpower. Iranian security minister Gholam Hossein Mohseni-Ezhe told Jewlarious, "China is a world leader in quelling rebellion and obstructing information. We deeply respect their fine work in Tienamen square. When this uprising occurred, we looked into our phone book and only saw one name, China. Of course, there was only one name in our phone book, because Iran has no friends, but still, China was the right choice."

The turmoil in Iran had a dramatic impact on the American market this past Tuesday as overnight pricing on West Persian Rugs reached an all time high of $547 per square foot. Interior designers, housewives and speculators stormed retailers across the country, seeking whatever remained of the scarce supply of rugs. J. Stewart Danielson of JSD designs in San Mateo, California told Jewlarious, "I have never seen anything like it. I have to get a fourteen by twenty six Persian rug for a client's dining room and as I am sprinting to the cashier, the price increases by 72% and then, at the checkout, some lady is biting my arm."

With America heavily dependent on Iran, as its chief exporter of cheap Persian rugs, the price increase could not have come at a worse time. Bruce Kasman Chief Economist at JP Morgan told Jewlarious, "America has been hit by the credit crunch, which has led to unemployment, limited corporate spending and reduced real estate prices. America's was addicted to the supply of cheap rugs from Iran, but now, where does a family of four get the money for a $27,000 rug to put under a coffee table and couches?"

With the market rising so quickly, authorities are concerned about price gouging and black markets. Tanis Johnson, a mother of three, lined up outside Saks Fifth Avenue on Washington, D.C.s Connecticut Avenue, was seen filling her Dodge Caravan with seven rugs. "Persian rugs are the new form of currency in America. I missed the tech bubble and the real estate bubble. If I have to go to Persia right now to get rich on this one, I will." Then Johnson added, "Where is Persia anyway and is it nice this time of year?" Meanwhile, unemployed trader, James Bunn, was attempting to short the rug market. "I purchased a ten by twelve rug from my neighbor and then lent it out to my nephew at $490 per square foot. If the protester can liberate themselves, there will be yards of cheap supply out there and uncle James will buy back the rug at $5 per square foot, if that! Then, I will have a fortune to spend on my nephews, from whom I have made a fortune arbitraging cheap rugs."

Regulators are concerned by the run-up and speculation, but are not willing to restrict prices or free up additional supply via the US Strategic Persian Rug Reserve (USSPRR) in Alaska. The US Government has been stockpiling Persian rugs of all different shapes and sizes since the Iranian revolution in 1979, recognizing that one day Iran will fall. Government spokesperson Hillary Graham told Jewlarious. "We are not planning to liquidate our inventory yet. For now, we are just going to sit in on it and wait and possibly invite our dogs to curl up and watch TV with us."

Coming to a Theatre Near Jews!
Why Are The Prayers Of Yom Kipur So Repetetive?
Ha'azinu 5783: A Time for Unity!
Twisted Thinking
Comments