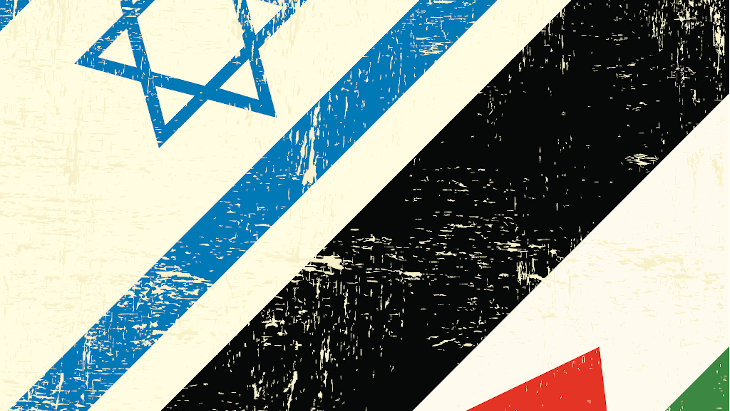 SATIRE: Israelis loves the new Middle East Peace Plan. Here is why we love it.

We’ve been planning peace for the past five decades. We love it. Anytime we have a chance to sit down and discuss a peace plan, we’re there. It’s nice. They bring you coffee. You get to sit on a plush couch. Who wouldn’t want that?

We plan Bar Mitzvahs. We plan weddings. We plan surprise parties for Auntie Shirley and Uncle Ira’s wedding anniversary. Jews don’t just get married. We call every relative to make sure they can all make it, then we plan the hall, the invites and the band and if after eight months of negotiations between the parents don’t fall through, there’s a wedding.

People like their houses. The last plan consisted of throwing Jews out of their homes, and believe it or not the people getting kicked out were not too happy about it. They said, “This plan does not sound too peaceful to me.”

We love shopping in the Arab Shuk. We need peace. The negotiations in the shuk right now are way too intense. If this peace plan goes through, I have a feeling that the vendors will mellow out during negotiations when I buy my next pair of sandals.

Israelis Want to Be Able to Travel in the Middle East

We want to be able to travel farther than a radius of twenty miles from our homes. We like the idea of people not hating us and our passports working.

Israelis Like the Idea of A Two State Solution

Our current state is not working. We can’t figure out how to get past these elections. Two state solution, one state solution, whatever it is we need a solution! We can’t vote again. Maybe a two state solution can get the Knesset moving again. Either that, or a two prime minister solution.

It bothers them so much. We just say it to get them mad.

Because Israelis Love It, We Know the Arabs Will Not

The Arab leadership immediately rejected the new peace plan. They saw the word “peace” and they were like, “No way. These aggressors of peace, always pushing peace on us. This aggression will not stand. Only barbarians speak of peace.” To quote Abbas, “We say a thousand times over. ‘No. No. No.’” He didn’t hear the question, but he was very adamant. I believe he was asked if he wanted mayonnaise on his shwarma. It turns out Abbas also doesn’t put mayonnaise on his meat; we have so much in common.

It’s like committing to show up at your friend’s event that you know will be cancelled. You just say “I wanted to be there,” and you end up looking good. This method works great for hosting events as well. Never invite people you think can make it. Invite everybody that you know will not come, and you will look good. I have done that. I had a birthday party and wanted gifts. I sent invitations to everybody I knew in America. None of them came to Jerusalem for my party. Got some nice gifts. Great return on investment. Best party of my life. Even though I was alone.

Every American president proposes a peace plan. It’s tradition. And as the people of the Holy Book, we love tradition.

We believe that each president should have the right to come up with their own plan for peace that won’t work. That is the right of the American presidency, it’s a rite of passage. It’s like the right that every rabbi has to author a Haggadah for Passover.

Every American president has the right to attempt to obtain a Nobel Peace Prize and fail miserably.

At Least American Recognizes Israel as a Country

The US acknowledges Israel has the right to exist among the family of nations. This recognition is kind of a prerequisite for us to sign a peace treaty. Most peace plans for Israel are given over by nations who don’t acknowledge Israel’s right to exist. Why anyone would think Israel would sign such a treaty is beyond us. The Syrian proposal for Israeli peace with the Palestinians went something like, “And Israel will not exist anymore and there will be peace in Israel.”

It Recognizes Jerusalem as Our Capital

We love the fact that our capital is recognized as our capital. For years, people have been mocking us, “Israelis think their capital is Jerusalem. What fools! They don’t even know their own capital!”

We’re sick of people deciding what Israel’s capital is. Afula is a great town, with great falafel and peanuts, but we’re not signing any treaties that set Afula as our capital. Some nations are just throwing out ridiculous ideas for capitals to get out of having to use Jerusalem. “Brussels?!” How did that get in the mix? We don’t even live there. Like the Belgian people would like us?!

Sadly, we have a long history of peace treaties, and usually they don’t end well. Just ask the ancient Israelite King Zedekiah. It really didn’t out well for him. So this isn’t the first peace treaty and it won’t be the last. But we might as well give it another go. It’s tradition.

Yachupitzville Development Project Opens to Little Fanfare
Deep Breaths
What Happened to the Truth?
The Japanese Everything Bagel Spice Recipe
Comments
MOST POPULAR IN Jewlarious
Our privacy policy