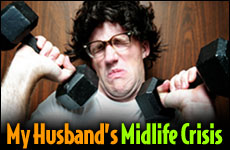 Some men buy sports cars. My husband does push ups.

Last night my husband came home, sweating the honest sweat of a man who had just torched at least 2,000 calories and released at least 10,000 endorphins at the gym. "Great workout!" he announced, before I could even inquire. "I rode 10 miles on the bicycle, did 125 push-ups, and lifted weights for 25 minutes. I feel like a new man."

"Fantastic!" I replied, feigning enthusiasm. After all, while my husband was toning his muscles to the consistency of marble, my greatest physical exertion had been hefting groceries into the house, shoving more cereal boxes into the cabinet, and chopping vegetables for dinner. I might have burned 67 calories, if I was lucky.

Ever since my husband had a fitness epiphany he's been trying to change both our lives.

It's been like this ever since my 40-something husband had an epiphany that would change both our lives: "Hey!" he announced. "I forgot to exercise in my 30s!" This realization put the fear of atherosclerosis into him, which is a good thing, of course. But it also sparked a determination to compensate for more than a decade of tepid exercise of haphazard jogging and changing air duct filters in the attic. Even our kids had grown too big to use as free weights. Now, resolute to recapture the fitness of his youth years before he qualifies for the senior discount at the movies, my husband is a man possessed, literally -- with a new set of hand weights, workout gloves, and moisture-wicking workout clothes.

I shouldn't complain, I know. Legions of middle-aged men have had mid-life crises far more threatening to their wives, such as shopping around for younger replacement wives, or discovering an urgent need to buy a boat and navigate around the Horn of Africa. Usually, the only maritime experience these men have ever had involved steering rubber duckies in the tub at age 5. And since they will refuse to ask for directions as they search for the Horn, they will never be seen or heard from again.

Still, when my husband started inviting me to join him at the gym, I found excuses to beg off. I had learned long ago that as a couple we could survive many things, but competitive athletic endeavors were not among them. Years earlier, you see, he tried to teach me to ski. It was an unmitigated disaster. He couldn't understand why I kept falling down, and I couldn't understand why any sane person would strap their feet tightly into two wooden sticks and then try to zoom vertically down a mountain. I decided then and there that any sport that required ambulances on-site was sheer madness.

For a while, my excuses were remotely plausible: "I wish I could go with you," I said, faking wistfulness, "but I'm waiting for the washing machine repair man. He said he'd be here by Thursday and I can't leave the house." I used this gambit until all of our household appliances were unambiguously in working order. Then I got desperate, claiming on one occasion that I had an emergency collagen treatment appointment. Another time I claimed I had a flare-up of post-post-post-childbirth-stress disorder, a rare syndrome that strikes women as much as 15 years after the birth of their children, and is characterized by a requirement to lay down and reread "Pride and Prejudice" until the episode passes.

Meanwhile, the kids caught the fitness fever and our house morphed into a mini-gym. I got kneed in the midsection while walking down the hall by a kid hoisting himself up with the new chin-up bar. I also learned to tread carefully in the family room to avoid tripping over the huge medicine ball, used for sit-ups by everyone but me.

I joined a women-only gym, determined to match my husband sinew for sinew.

Eventually, my competitive spirit kicked into gear. If I didn't do something soon, my husband would enter triathlons as I watched from the sidelines, with contours more balabusta than bellisima. I also had caught a case of endorphin-envy, as all that exercise kept my husband, and even the teenagers, in finer fettle than me. That's when I summoned my courage and joined a women-only gym, determined to match my husband sinew for sinew. As I walked into my first aerobics class in years, I gave my body a pep talk as if it were The Little Engine That Could: "I think I can, I think I can, I think I can!"

Much to my shock, I managed to keep up with the group, fueled by Bruce Springsteen's "Rosalita" and an industrial-sized mug of caffeinated coffee, to levels of frenzied energy I didn't even know I still had. After class, the instructor high-fived me and gushed, "You did an amazing job!" in a tone so startled it was no longer a compliment. This just proves that the work of a dedicated Jewish mother has vastly underappreciated rewards, including strength training. After all, over the years we perform hundreds of thousands of bicep curls lifting children, grocery bags, school backpacks, and pot roasts.

Now, with a sense of purpose as hard-boiled as I hope my muscles will become, my husband and I are heading out for a hike. He once described the path we're taking as having "a slight incline," which is like describing the Dead Sea as "slightly high-sodium." So here I go, athletic shoes tied, water bottle at the ready, wearing my new t-shirt that says, "My husband had his mid-life crisis and all I got was this lousy pedometer."

Murphosky's Law
Is Grease the Word?
Dried Fruit Compote
Scientific Curiosity and the Divine Encounter
Comments
MOST POPULAR IN Jewlarious
Our privacy policy
Aish.com Is Looking for Great Writers