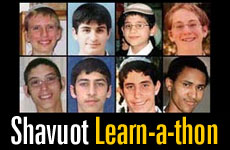 Awakening from our national slumber.

A few months ago, on March 6, 2008, the Jewish world was shocked to the core upon hearing the horrific news from Jerusalem. Eight young boys -- while studying Torah at the Mercaz HaRav yeshiva -- had been murdered by a barbaric terrorist. Many of us sensed that this was not a random attack on Israelis, but was a specific attack on our two most precious possessions -- our children and our Torah.

Eleven more students were injured, while dozens more were direct eyewitnesses to the attack and suffered severe emotional trauma.

When I was growing up in western New York, we used to participate in an annual "Hunger March." It was a 20-mile walk, and we'd ask people to sponsor us a certain amount of money for each mile walked. The proceeds went to a local charity. We had a good time and it raised a lot of money.

This year, on the night of Shavuot (June 8, 2008), individuals, shuls and schools around the world are going to try something even better: a global "Learn-a-thon."The idea of a Learn-a-thon is simple: Individuals undertake to learn a number of hours of Torah on Shavuot night, while soliciting sponsorship from family and friends. All the funds raised will be distributed by onefamilyfund.org to assist those affected in the Mercaz HaRav attack.

The idea of learning all night on Shavuot began among the kabbalists in Tzfat in the 16th century. The Shavuot night learning is called Tikkun Leil Shavuot – literally, "an act of spiritual repair on Shavuot night."

In fact, Torah study is a beautiful way to unite the Jewish people. All of us -- no matter what our affiliation, language or location -- learn the same Torah that was received by the Jewish people at Mount Sinai 3,300 years ago. And anyone who has had the experience of sitting with a friend and learning Torah, knows the power and joy of working out a common understanding, while connecting to the word of the living God.

On Shavuot, we make a declaration of priority: Torah is worth staying up all night for.

Why All Night Torah?

The Midrash gives a historic basis for the custom to learn all night: On the morning that the Jewish people received the Torah at Mount Sinai, they overslept.

In a sense, we too are asleep. Rockets are raining down on Sderot; Iran is threatening Israel with nuclear weapons; Hezbollah is stockpiling missiles and controls Lebanon; students are being massacred at the Mercaz HaRav yeshiva. In the Diaspora, assimilation and apathy are causing untold thousands of Jews to fall away from our people.

Do we care? Are we numb? Are we doing anything to help? "Do not stand on your brother's blood," the Torah tells us.

And so, on the night of Shavuot, we rectify this tendency by studying the Torah, the Jewish national guidebook. By doing so, we demonstrate our resolve to wake up -- to wake up to situation in Israel and around the Jewish world today.

Waking up starts with the most basic questions: Where are we going? What are we doing?

We discover these answers through Torah study. As Rabbi Berel Wein writes:

The Jewish value system, embodied in the Ten Commandments, which Shavuot truly commemorates, is the key to successful Jewish survival in this land. It has always been so in our history and it remains so today…

Shavuot represents the Jewish value system. It looks to build a more just society, to raise the poor and to temper the rich, to teach the unlettered and humble the scholar, to exalt and save life, and to unite Jewish society while preserving the right to be individually different one from another. Shavuot is… reliving of Sinai and its value system, its lofty goals and long road.

This Shavuot is the perfect time for all Jews to wake up and restore our clear Jewish vision. All together, we will study the Torah, our most precious national possession. We will commemorate the memory of those eight holy yeshiva boys. And with our hourly sponsorship, we will help alleviate the financial burden on their families and on all those who suffered in this attack.

And God willing, we will achieve the spiritual repair, once again united as the Jewish people were at Sinai, "as one person with one heart."

For more info, visit www.shavuotlearnathon.com
Like What You Read?  Give Jews around the world the chance to experience engaging Jewish wisdom with more articles and videos on Aish. It would make your mother so proud and as a nonprofit organization it's your support that keeps us going. Thanks a ton!

The Revolutionary Revelation
For Every Individual, A Torah Scroll
Allegiance To The Monarch
Meet the Real You: Yom Kippur
Comments
MOST POPULAR IN Israel
Our privacy policy
Aish.com Is Looking for Great Writers