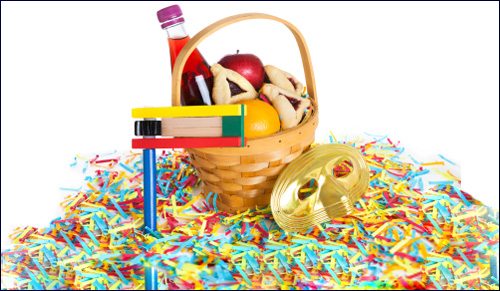 Summing up the Purim holiday: They tried to kill us, we won, let’s eat.

Purim is Judaism’s most dramatic, fun-filled holiday. When else can you dress up like a bunny rabbit and eat doughy triangles filled with poppy seeds?

Purim occurs on the 14th of Adar. (In certain walled cities like Jerusalem, “Shushan Purim” is celebrated the following day, the 15th of Adar.)

Purim celebrates the dramatic turn-around events, where the wicked Haman tried to annihilate the Jewish people of ancient Persia. The Jews were saved through God’s miraculous arranging of events, as expressed by the heroics of Mordechai and Esther.

There are four mitzvot specific to the holiday of Purim (see below).

Set in Persia 2,300 years ago, the Book of Esther – or the “Megillah” as it is commonly called – recounts how a seemingly unrelated series of events spun together to save the Jewish people from annihilation.

King Achashverosh throws a huge six-month party and Queen Vashti refuses to follow orders. After a global search, Esther becomes the new queen – but does not reveal her Jewishness. Mordechai, the leader of the Jews, uncovers a plot to assassinate the king – putting him also in a favorable position with the king. All this comes in handy when Haman, the king’s top advisor, obtains a decree to have all the Jews destroyed. (Purim is the Persian word for "lottery," used by Haman to determine a date for his planned destruction of the Jews.)

In the end, through a complex twist of events, Esther gets the decree reversed, Haman is hanged on the gallows, and Mordechai becomes prime minister.

The name Megillat Esther (Scroll of Esther) literally means "revealing the hidden." The Book of Esther is in the Bible, not mentioning God's name even once. The hidden hand of God is revealed through the maze of events.

Megillat Esther teaches us that life’s challenges are always for the best, because what appears as an obstacle is really an opportunity to develop ourselves for the better. And it all comes from God’s invisible hand that guides our fate, every step of the way.

Every year, the Fast of Esther is held on the day prior to Purim (Adar 13).

What is the source of this fast? In the Megillah (4:16), Esther agrees to see the king uninvited, and asks the Jewish people to fast for three days beforehand.

Also, the Jews fasted and prayed on the 13th of Adar in preparation for their defense against Haman's decree. As such, his is not a fast of sadness, but rather one of spiritual elevation and inspiration.

The fast begins at dawn and ends after nightfall. No eating or drinking is permitted. Since this is not a major fast, pregnant or moderately ill people are exempt from the fast. (Consult your rabbi.)

If the 13th falls on Shabbat, due to the honor of Shabbat, the fast is observed on Thursday, the 11th of Adar.

On the eve of Purim, there is a custom to give three coins to charity, to recall the half-shekel (Machatzit HaShekel) donated annually to the Temple treasury during Adar. Three coins are given because in the Torah portion dealing with the half-shekel (Exodus 30:11-16), the word terumah (“donation”) appears three times.

Each coin should be the denomination of half the standard currency in that country (e.g. half a shekel, half a dollar, half a pound). The money is then given to the poor.

Reading the Megillah (Scroll of Esther)

The Scroll of Esther (Megillah) is read on Purim night, and again the next day. We read it in the synagogue, because the larger the crowd, the greater publicity is given to the miracle of our being saved.

The entire Megillah must be read from a kosher scroll, written with proper ink, parchment, etc. Every word must be clearly heard.

The custom is to make noise at the mention of Haman's name, in keeping with the command to wipe out the remembrance of Amalek (Deut. 25:17-19). Similarly, the Shabbat before Purim is called Shabbat Zachor, because the Maftir portion features the command to remember (zecher) Amalek.

On the day of Purim, we send two items of food to at least one person – Mishloach Manot. It is preferable to send ready-to-eat foods or drinks. The food should be of a respectable quantity according to the standards of the sender and recipient.

The reason for this mitzvah is to ensure that everyone has sufficient food for the Purim feast. More to the point, this increases love and friendship between Jews, providing an ideal opportunity to embrace our fellow Jews – irrespective of any religious or social differences. (After all, Haman did not discriminate amongst us.) For this reason, it is particularly good to give gifts to those who you may have had an argument with, or someone new in the community who needs a new friend.

According to some, it is preferable to send the gift via a third person, since the verse (Esther 9:22) describes the mitzvah as “sending” food packages to one another.

Matanot La’evyonim – Gifts to the Poor

On the day of Purim, it is also a special mitzvah to give money to at least two poor people – Matanot La’evyonim. Each poor person should be given at least the amount of food that is usually eaten at a regular meal, or the amount of money required to buy this.

It is preferable to do this after the Megillah reading, so that the blessing "She'hecheyanu" can apply to it.

It is better to spend more on gifts to the poor (Matanot La'evyonim) than on Mishloach Manot. There is no greater joy than gladdening the hearts of orphans, widows and poor people. The Jewish people are one unit – we can’t possibly enjoy the holiday if poor people don’t have enough.

The day's grand finale is the festive meal. The Purim seudah (feast) should begin during the daytime and extend until after dark.

We eat our fill and pamper our bodies – because it is the Jewish bodies that Haman sought to destroy. Also, we are obliged to imbibe alcohol (responsibly, of course) until one doesn't know the difference between “cursed is Haman” and “blessed is Mordechai."

We dress up in costumes, to let our defenses down and open up to the deeper reality of ourselves and our world. All our current problems and life's imperfections blend into good, until they become one unified expression of the Almighty’s infinite perfection.

On Purim we add "Al Ha'nisim" – an extra paragraph which describes the Purim miracle – to the Amidah prayer, and also to the Grace After Meals.

The Megillah (Esther 9:20-22) says that the Jews prevailed over their enemies on the 13th of Adar, and on the 14th they feasted to celebrate the victory. But in Shushan the capital, the battle lasted an extra day and the holiday was not celebrated until the 15th.

When the Sages instituted Purim, they took into account that Shushan was a walled city, and made the following stipulation: While most cities celebrate Purim on the 14th of Adar, cities which were walled at the time of Joshua should celebrate “Shushan Purim” on the 15th.

The only city that was definitely walled at time of Joshua is Jerusalem. Some cities in Israel – Jaffa, Akko, Hebron – have an additional Megillah reading on the 15th as a stringency.

Hanukkah: What, How and Why
Lokshen Noodle Kugel Recipe
G-d Time
Shavuot is The Holiday of Cheesecake and Blintzes
Comments