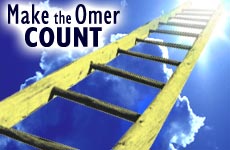 Instead of counting "down" toward the big day, we count "up" from one to 50. Why?

The Jewish people left Egypt on Passover, and 50 days later (on the holiday of Shavuot) received the Torah at Mount Sinai. Today, in revisiting that Sinai experience, we observe a special mitzvah called "Counting the Omer," where we actually count aloud each of these days, beginning on the second night of Passover. (The Omer was a special offering brought to the Holy Temple during this season.)

Counting in anticipation of an exciting event is quite understandable. At one time or another, we've all probably said something like, "Grandma's coming to visit in a week and a half," or "Only 17 more days til my birthday!" But there's one subtle difference: The usual method is to count down toward the big day, whereas in the case of the Omer, we count up ― from one to 50. Why the difference?

To understand, we first need to answer a more basic question: Why did God wait 50 days after the Jews left Egypt before giving the Torah? Why didn't He simply give it to them in Egypt, or immediately after their departure?

The answer is that the Jews were not yet spiritually equipped to receive the Torah. For over 200 years, they had been living in an Egyptian society known to be the world center for immorality and vice. Even without direct Jewish participation, these influences nonetheless permeated the air and seeped into their consciousness. The primary book of Kabbalah, "The Zohar," reports that in Egypt the Jews had slipped to the 49th level of spiritual impurity. (50 is the very lowest.) God could not give the Torah at this point. The Jews needed to grow up first, or else they would have squandered the opportunity.

The high-impact adventure of the Exodus ― 10 miraculous plagues and the splitting of the Red Sea ― launched the Jews into physical freedom. Yet the miracles of Egypt were only a jump-start to the spiritual possibilities that lay ahead. A one-time experience, as powerful as it is, does not permanently change anyone's emotional attitude. That is only possible through practice and adjustment over time.

It reminds me of a scene from the film "Trading Places." Eddie Murphy has gone from beggar to wealth in a few hours, and the first thing he does upon entering his own luxury apartment is to steal things! His physical body had been transported to opulence, but emotionally he was left behind. You can take the Jew out of Egypt, but you can't take Egypt out of the Jew.

I've witnessed a similar phenomenon at the Discovery Seminar, a dramatic presentation of the rational basis for Jewish belief. Many people leave the seminar with the astounding conviction that God exists and that He gave the Torah to the Jewish people at Mount Sinai. Yet without proper follow-up, the impact lasts but a few days. Real change occurs only through steady day-to-day growth and a commitment to a consistent program of contemplation and study.

Now we can understand why the 50 days of the Omer is counted in a forward progression. We begin the process at the 49th level of spiritual impurity, and every day we peel away another layer of gunk, to reveal the original, pure soul we each possess. That's why every step both reduces the negative number and increases the positive number ― the single step of peeling away a layer automatically reveals the corresponding positive side.

A Time of Growth

Classic Talmudic commentators say that the days of counting the Omer are the most auspicious for acquiring these spiritual levels.

This necessity for self-growth is stressed in the Torah's description of Abraham: "Abraham was old, he came with his days" (Genesis 24:1). "He came with his days" teaches us that Abraham used each of his days to the fullest extent. At the end of his life, he came to old age "with all his days" in hand. No day was without its requisite growth.

When it comes to children, we take for granted that growth and development is part of childhood. You don't expect a 10-year-old to act the same way he did at age five. But somehow as adults, we lose that impulse to continue growing. Yet should a 30-year-old act as he did at age 25? As adults, we could be using those five years in a very powerful way.

The formula for staying young is to continue growing. Losing that capacity at any age is tragic. Any time we're not growing and changing, we're not living. We're just existing.

One Step at a Time

A major impediment to growth is the feeling of being overwhelmed by the magnitude of the task. But Judaism is not all-or-nothing. If I cannot have 1,000 gold coins, does that mean I should not strive to have even one?! The biggest reason people fail is that they have set a goal which is too lofty and unattainable. We inevitably fall short and get discouraged.

In Jacob's famous dream, God shows him a vision of a ladder reaching toward heaven. Spiritual growth, like climbing a ladder, must be one step at a time. By setting small, incremental goals, we will be encouraged by the periodic success. To make the plan foolproof, make your initial goal something you know you can reach. Tasting success will bolster your confidence and determination, and you can use this energy to strive for higher goals. Remember, the longest journey begins with just one step. And what goes in slow, will remain.

The story is told of Rabbi Yisrael Salanter (19th century Europe) who took upon himself to lead an entire city back to Torah observance. He set up a weekly class and began by telling them, "If you have to work on Shabbat, at least try to minimize the violation." In today's lexicon, that would mean walking instead of driving, or setting your TV on a timer. With this approach, Rabbi Salanter was able over a few years to turn the community around to full Shabbat observance ― one step at a time.

Take pleasure in the times you achieved your goal, and use that as a motivation to improve further. Don't castigate yourself if you do not always succeed. No human being is perfect. The Kabbalists say that spiritual growth is "two steps forward and one step back." We will inevitably have setbacks. What's important is that we're heading in the right direction.

King Solomon tells us in Proverbs (24:16): "The Tzaddik falls seven times and gets up." The definition of a Tzaddik is not someone who never makes a mistake, but rather someone who, although he may fail, does not give up. He tries again and does not despair!

One important principle to remember is that you are not competing with anyone but yourself. Secular society has accustomed us to compete against others ― whether in business or on the tennis court. Of course, healthy competition is good. But life is not a race to beat the other guy; life is only a race to conquer yourself. As we climb the ladder, it's more important which direction we're headed than which rung we're on.

Nowhere in the entire Torah is the date of Shavuot mentioned. It merely takes place at the end of 50 days ― because the key is to get there at your own pace, following these steps. To maintain growth, a good rule of thumb is to always be a bit uncomfortable. You don't want to climb a ladder and get stuck between rungs!

It also helps to reinforce your goals by writing them down. Writing helps a person to concentrate and clarify his thoughts. A business person would surely write out goals and keep an accurate tally of their progress. In Judaism, this is called Cheshbon ― a spiritual accounting.

Keep a notebook for writing down these daily goals, and make a chart to track your progress. Place this in a conspicuous place like in your daytimer or on the refrigerator, and then review your goals by reading them aloud. The Torah, in describing the Omer, says, "count for you" (Leviticus 23:15) ― because each person has to do this for himself, speaking it aloud. Strategize!

As with anything, the key is consistency. Choose a convenient time and commit to working on this at least 15 minutes every day. Don't postpone learning for "afterwards," at which time it becomes late and you may be too tired. Say to yourself that you are going to dedicate 15 minutes and nothing is going to stop you. Close your door, unplug your phone, and log offline. If you need a daily reminder, try the buddy system.

Ideally, at the end of the Omer process, we will have experienced a journey of self-improvement and be ready to receive the Torah. The holiday we're working toward is called "Shavuot," which means "weeks." The name itself tells us that without the weeks of preparation beforehand, there is no Shavuot. So don't just count the Omer ― make the Omer count.

7 Keys to Mastering Your Life’s Mission

A Family Spiritual Countdown
Should I Break Up, Get Engaged or Keep Dating?
Time Is Your Precious Commodity
A Constant World in Flux
Comments
MOST POPULAR IN Counting the Omer
Our privacy policy