Why Dairy on Shavuot? 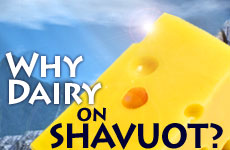 Ahhh... the sumptuous delight of blintzes and cheesecake. Eating a dairy meal on Shavuot has become an enduring tradition. But what's the source for this? Here are seven fascinating reasons:

When the Jewish people received the Torah at Mount Sinai, included was special instructions for how to slaughter and prepare meat for eating. Until then, the Jews had not followed these laws, thus all their meat – plus the cooking pots – were now considered "not kosher." So the only alternative was to eat dairy, which requires no advance preparation.

This raises the question, however: Why didn't the Jews simply slaughter new animals, "kasher" their pots in boiling water (hagala), and cook fresh meat?

The answer is that the revelation at Sinai occurred on Shabbat, when slaughter and cooking are prohibited.

Another point to clarify: How were the Jews able to obtain milk on Shabbat, since milking an animal falls under the prohibited activity of mefarek?

The answer is that the Jews already had milk available from before Shabbat, which they had been using to feed the various animals that accompanied their journeys in the wilderness.

Torah is likened to milk, as the verse says, "Like honey and milk [the Torah] lies under your tongue" (Song of Songs 4:11). Just as milk has the ability to fully sustain the body of a human being (i.e. a nursing baby), so too the Torah provides all the “spiritual nourishment” necessary for the human soul.

The gematria (numerical value) of the Hebrew word for milk, chalav, is 40. We eat dairy foods on Shavuot to commemorate the 40 days that Moses spent on Mount Sinai receiving instruction in the entire Torah. (Moses spent an additional 40 days on Sinai, praying for forgiveness following the Golden Calf, and then a third set of 40 days before returning with a new set of stone tablets.)

The numerical value of chalav, 40, has further significance in that there were 40 generations from Moses who recorded the Written Torah, till the generation of Ravina and Rav Ashi who wrote the final version of the Oral Torah, the Talmud.

Further, the Talmud begins with the letter mem – gematria 40 – and ends with mem as well.

The Torah says: "Bring Bikkurim (first fruits) to the God's Holy Temple; don't cook a kid in its mother's milk" (Exodus 34:26). Since the first day for bringing Bikkurim is on Shavuot (in fact, the Torah calls Shavuot "the holiday of Bikkurim"), the second half of that verse – referring to milk and meat – is the negative commandment corresponding to Shavuot day. Thus on Shavuot we eat two meals, one of milk and one of meat, taking care not to mix the two.

Interestingly, we are instructed not to use the same loaf of bread for a meat meal and then later at a milk meal, lest some of the meat substance had splattered on the bread. Thus by eating two meals – one of milk and one of meat – we inevitably have two loaves. This corresponds to the special "Two Loaves" that were offered in the Temple on Shavuot.

An alternative name for Mount Sinai is Har Gav'nunim, the mountain of majestic peaks. The Hebrew word for cheese is gevina, etymologically related to Har Gav'nunim.

Further, the gematria of gevina (cheese) is 70, corresponding to the "70 faces of Torah."

Moses was born on the seventh day of Adar, and stayed at home for three months with his family, before being placed in the Nile River on the sixth of Sivan.

Moses was rescued by Pharaoh's daughter, who adopted Moses and took him to live in Pharaoh's palace. But right away a problem arose: what to feed the baby. In those days, there was no bottled baby formula, so when the birth mother wasn't available, the caretaker would have to hire a wet nurse. In the case of Moses, he kept refusing to nurse from Egyptian women. The Talmud explains that his mouth needed to be kept totally pure, as it would one day communicate directly with God. Finally Pharaoh's daughter found one woman who Moses agreed to nurse from – Yocheved, Moses' biological mother!

Appreciate the irony: Pharaoh's murderous decree against Jewish babies was specifically intended to prevent a new generation of Jewish leadership. So what happened instead? Moses, the upcoming great Jewish leader, was raised, educated and trained – right under Pharaoh's nose, in Pharaoh's own home, at Pharaoh's expense! And on top of it all, Moses' mother got paid a salary!

The eating of dairy foods on Shavuot commemorates this phenomenon in the early life of Moses, which occurred on the sixth of Sivan, the day on which Shavuot falls.

According to one commentator, that day at Sinai was the first time the Jews ate dairy products. There is a general prohibition of "eating a limb from a live animal" (ever min hachai), which logically should also include milk, the product of a live animal. Ever min hachai is actually one of the Seven Noahide Laws which the Jews observed prior to Sinai (and which has applied to all humanity since the days of Noah).

However, upon receiving the Torah, which refers to the Land of Israel as "flowing with milk and honey" (Exodus 3:18), dairy products became permitted to the Jews. In other words, at the same moment that their meat became prohibited, dairy became permitted. They ate dairy on that original Shavuot, as we do today.

If the Jews ate dairy for the first time at Mount Sinai, this raises the question how Abraham could have fed dairy products to his three guests (Genesis 18:8).

The answer requires a technical understanding of the prohibition of ever min hachai, "limb from a live animal." One way is to define a "limb" as a piece of meat which contains bones and/or sinews. It is this type of ever min hachai which has always been forbidden to non-Jews. This prohibition does not include milk, which comes from a live animal but does not contain bones or sinews. Hence, Abraham was permitted to feed milk to his non-Jewish guests.

There is a second, expanded definition of ever min hachai, which encompasses all products from a live animal -- including milk. It is this definition which is prohibited to Jews. Thus it was not until the giving of the Torah, with its reference to "land of milk and honey," that dairy products became permitted to Jews.

Shavuos Cheesecake Deluxe
Faith: the Axis Upon Which the Wheel of Science Turns
Love - Not Just About Chemicals Anymore!
Is There a Moral Code in a Virtual World?
Comments
MOST POPULAR IN Shavuot
Our privacy policy