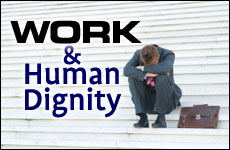 Why the highest form of tzedakah is helping someone find a job.

It was one of Maimonides' most penetrating insights. Listing the eight rungs of the ladder of tzedakah (charity), he places highest of all one 'who provides someone with a gift or a loan or a business partnership or in some other way helps him find employment.' The highest degree of tzedakah, exceeded by none, he writes, is to help someone start a business or find a job.

In conventional terms this makes no sense at all. Usually we think of charity in terms of what it costs the person who gives. The more you give, the more charitable you are. But often it costs nothing to help someone find a job. Investing in a new business may even bring financial gain.

Nothing more eloquently expresses the distinctiveness of Jewish ethics. Tzedakah does not mean charity. The word is untranslatable since it means both charity and justice, two concepts that are, in English, opposites. If I give someone $1,000 because I owe him this sum, that is justice. If I give him $1,000 because he needs it, that is charity. In English the two cannot be combined.

In Judaism tzedakah is more than charity - it is social justice.

In Hebrew they cannot be separated. That is because in Judaism, we believe that what we have, we do not truly own. We hold it in trust on behalf of God. One of the conditions of that trust is that we share some of what we have with those in need. So in Judaism tzedakah is more than charity. It is a form of social justice.

Social justice means, among other things, caring for human dignity. So the laws of tzedakah focus less on the giver than on the recipient. Jewish law is intensely aware that needing help from others is not only a financial crisis. It is also psychologically traumatic. To lose your job is a blow to self-respect, an essential element of human dignity. So Judaism tells us that, wherever possible, we must try to minimize the embarrassment or shame.

We try to give not only generously but also anonymously, so that people will not know from whom they have received. That is why the highest form of tzedakah is helping someone find a job, because of all forms of assistance it is the one that most effectively gives someone back their independence, dignity and self-respect. The best aid, says Maimonides, is to help someone dispense with the need for aid. That should be a guiding principle for our community in the current recession.

It is a terrible shock to lose your job, however much you know that others are losing theirs, and that it is all the result of a global recession for which no one company or country is to blame. Work means independence, which is at the core of human dignity. Even in Eden, said the sages, God gave Adam the dignity of work, placing him in the garden 'to serve and protect it.'

No one knows how long the current financial crisis or the economic recession will last. We do know that it is taking a terrible toll. People are losing their jobs, their savings, and in some cases, their homes. Now is the time for us to act as a community. We can all help in some way, sharing our skills with others or offering financial assistance to those in need. Best of all, we can help them find work and an income and a recovered sense of dignity.

Every community should establish a group dedicated to this work, guided by its rabbi, making use of the talents and networking skills of people within the congregation. That was the greatness of Jewish communities throughout the ages. They knew that kol Yisrael arevin zeh bazeh, we are all responsible for one another, and they acted on it. Now is the time to put that principle into practice. God's gifts become blessings when we share them with others.

This article originally appeared in the Jewish Chronicle.

The Mandate to Heal
Why Are The Prayers Of Yom Kipur So Repetetive?
Ha'azinu 5783: A Time for Unity!
Twisted Thinking
Comments