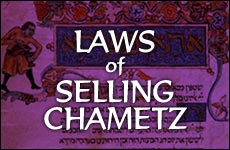 Might as well know how to do it right!

1. Why was the procedure of selling chametz originally instituted?

Originally, only those who traded in food sold their chametz in order to avoid major financial difficulty. It was done personally with a non-Jew and the chametz was taken out of the house. When this became a practical problem, a locked room containing the chametz was sold to the non-Jew (or rented, in Israel where it is forbidden to sell land to a non-Jew) and the key was given to him. More recently, many other leniencies have been included.

2. May individuals sell their chametz to a non-Jew?

Due to the highly complex laws of acquisition between Jew and non-Jew, the custom is that the rabbi sells the chametz for the community.

3. May one sell food that is definitely chametz?

According to most opinions, one may sell food that is definitely chametz.

Some have the custom not to sell food that is definitely chametz. This is because the sale involves complex halachic issues, and it is difficult to fulfill the requirements in a way that satisfies all opinions. One may be lenient if disposing of it would cause financial hardship.

4. May one sell food that is questionable chametz?

According to all opinions, one may sell food that is questionable chametz.

5. Aside from bread, which foods are definitely chametz or contain chametz?

The custom is to permit the sale of flour. Although some have the custom not to sell food that is definitely chametz, flour is not considered to be definite chametz. This is because the grains are washed quickly and probably have not been in contact with water for sufficient time to become chametz.

7. Which products are questionable chametz and may be sold?

8. Should everyone arrange the sale of chametz?

Due to today's technology and advanced methods of food production, even a seemingly simple item may contain chametz. Therefore, everyone is advised to arrange the sale of chametz.

9. Do chametz pots and dishes need to be sold?

No. If pots were sold, they would need to be immersed again after Pesach when they are reacquired from the non-Jew. The custom is to include in the sale any chametz that remains in the pots.

10. Do dried flower arrangements need to be sold?

Dried flower arrangements that contain one of the five grains should be put away and included in the sale, in case they were in contact with water and may have become chametz.

11. What else should be included in the sale?

If a person owns stocks in a company that deals with chametz, he should preferably list them. According to some opinions, this ownership establishes him as a partial owner of the chametz.

12. Should every item of chametz and its exact location be specified in the contract?

Preferably, the exact location of all the chametz should be specified. However, if an item or a location was omitted, it is included in the sale. This is because there is a clause in the contract that includes all types of chametz in all places.

13. Does one need to lock the place where the chametz is stored?

If possible, yes. Otherwise, it should be taped closed and labeled that there is chametz inside. A section of the house that is being sold should be locked if possible, or closed off.

14. If the house will be vacant during Pesach, does this affect the sale?

Since the non-Jew must have access to the chametz, one should leave a key with a neighbor and inform the authorizing rabbi of its location.

15. During Pesach, may items be taken from sections of the house that have been sold?

The contract gives permission to the seller to retrieve an item from these locations in times of need. However, one should not do so too often, since this would indicate that the sale has not been taken seriously.

16. May a person appoint an agent to sell chametz with the rabbi?

Yes. There are suitable contracts of sale available for those who cannot arrange the sale personally.

17. What if a person or his agent cannot personally meet the rabbi?

Ideally, either the person or his agent should sign a contract in the presence of the rabbi and grasp an object to strengthen his authorization. However, in extenuating circumstances, a person may arrange the sale with the rabbi by telephone.

18. Should one pay the rabbi for his services?

Although this is not strictly required, many people have the custom to do so. According to some opinions, this strengthens the rabbi's authorization.

19. How should the sale be arranged if one is going to be in a different time zone during Pesach?

He should tell this to the rabbi who is selling the chametz. The rabbi will then be able to schedule the sale and repurchase of the chametz in an acceptable way.

Excerpted from "Guidelines" - over 500 commonly asked questions about Pesach (Targum/Feldheim).