Selected Guidelines for The Seder 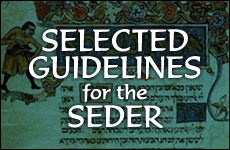 A handful of essential tips for a smooth and kosher Seder.

For a complete list of Seder instructions, see "Laws of the Seder" ) and also the book "Guidelines" - over 500 commonly asked questions about Pesach (Targum/Feldheim), from which this article was excerpted.

1. What does the word 'Seder' signify?

The night of Pesach is indeed very different from all other nights of the year. It is steeped in holiness and abounds with mitzvot, both Torah and rabbinic, and is rich in customs and traditions. Every detail is of great significance and one should perform each step meticulously, knowing that no part of the procedure is trivial. The word 'Seder' means order, indicating that the entire evening follows a set order, arranged by the Sages with holy inspiration and invested with hidden meanings and deep interpretations.

2. What are the main steps of the Seder?

There are 15 main steps, each of which has a special name. These names form a simple rhyme, thus becoming a memory aid to fulfilling the mitzvot of the evening in the correct order. They are:

Many have the custom to announce each step with its name at the appropriate time.

3. What are the main mitzvot of the Seder?

There are two Torah mitzvot - eating matzah and relating the story of the slavery and Exodus. There are three main rabbinic mitzvot - drinking four cups of wine, eating marror and reciting Hallel.

4. Are children obligated in all the mitzvot of the Seder?

Children who have reached the age of education (five or six) should try to fulfill all the mitzvot of the Seder. Since their obligation is rabbinic, smaller quantities may be used for the mitzvot.

Children should be encouraged to remain at the Seder table at least until the end of the meal and if possible until after the fourth cup of wine. It is for this reason that the Sages instituted many unusual procedures during the Seder, to arouse the interest of the children and hold their attention during the evening. The Torah requires a father to relate the story of the slavery and Exodus to his children, and the Haggadah emphasizes this by describing the four types of sons whom one may have to address. Some parents make the mistake of sending the children to bed after reciting the Four Questions before they have heard the answers to their questions. It is advisable to see that the children sleep well on the afternoon before Pesach, in order that they will have the strength and enthusiasm to remain awake during the Seder.

5. Who recites Kiddush at the Seder?

All the participants should hold the wine during Kiddush, whether they are listening or reciting it.

6. What should one think about before reciting (or listening to) Kiddush?

One should have in mind to fulfill two mitzvot:

- The mitzvah of Kiddush.

- The mitzvah of drinking the first of the four cups of wine.

One should have in mind that the Shehechiyanu blessing applies to the Yom Tov and to all the mitzvot of the Seder.

7. What should one think about before beginning the narrative of the Haggadah?

Everyone should have in mind to fulfill the obligation to relate the story of the Exodus from Egypt. The mitzvah is fulfilled by relating three basic ideas:

- The wickedness of the Egyptians and the terrible sufferings that they afflicted upon the Jewish people during the long years of slavery.

- The miraculous plagues that God brought upon the Egyptians, and the punishments meted out to them measure for measure.

- Thanks and praise to God for the wonderful acts of kindness that He performed for the Jewish people, redeeming them from bondage and choosing them as His special nation.

8. What if a person does not understand the text of the Haggadah?

The mitzvah is not fulfilled by mere recital of the Haggadah if the words are not understood. Those who are not familiar with Hebrew are strongly advised to spend time before Pesach studying the Haggadah, in order to turn the Seder night into a deep and meaningful experience. It is a tragedy that so many people expend vast amounts of time and energy in preparing the house for Pesach, but are unable to find meaning and joy at the Seder night. In any event, the leader of the Seder must ensure that everyone understands at least the most essential sections of the narrative.

9. Which sections of the narrative are the most important?

- From the section that begins "Rabbi Gamliel used to say" until the second cup is drunk.

10. How much time should be spent on narrating the story of the Exodus?

For most people it is sufficient to recite the standard text of the Haggadah, pausing occasionally to elaborate on the essential sections. Analyses of the text are out of place at this stage, and a person should quote Midrashim and commentaries that describe the slavery and the miracles. It is important to explain the story to the participants according to the level of their understanding. In particular, one should try to hold the attention of the children during the narrative by describing the story as vividly as possible. One should keep an eye on the time, since every effort must be made to eat the Afikoman before halachic midnight. As a rough guide, one should complete the narrative of the Haggadah and drink the second cup of wine approximately two hours before halachic midnight. If there is time to spare, one may expound on the story during the meal.

11. What should one think about before the blessings are recited on the matzah?

- The leader of the Seder should have in mind to include everyone else with his blessings.

- Everyone else should have in mind to fulfill his obligation by listening to the blessings.

- To fulfill the Torah mitzvah to eat matzah on the first night of Pesach.

- The blessings should also apply to the korech sandwich and Afikoman.

- Remember to recline while eating the matzah.

12. Are there any restrictions relating to the meal?

Roast meat or poultry should not be served. The shankbone should also not be eaten.

One should not eat excessively. Overeating may cause drowsiness and one will not be able to conclude the Seder successfully. One must also remain with some appetite for the Afikoman at the end of the meal.

One must leave sufficient time after the meal to eat the Afikoman before halachic midnight.

If a dessert is served, one should avoid a fruit whose blessing is borei p'ri ha'adama since this raises a doubt whether the blessing over the Karpas includes such a dessert.

13. What is the meaning of the cup of Elijah the Prophet?

It is a symbol of faith, that just as God redeemed the Jewish people from the slavery in Egypt, so too will He send Elijah to announce the final redemption from exile.

It represents the fifth cup of wine corresponding to the fifth expression of redemption - "I will bring you to the promised land" (Exodus 6:8)…

Many have the custom to leave [the wine from the cup of Elijah] covered on the table overnight and use it for Kiddush on Yom Tov morning. Others pour it back into the bottle.

14. Why do some people recite Shir Hashirim (Song of Songs) after the seder?

According to the Midrash, Shir Hashirim is an allegorical song describing the mutual devotion between God and the Jewish people. Many of the verses refer to the miraculous Exodus from Egypt.

There is a mitzvah to remain awake as long as possible to study the laws of Pesach and to continue relating the miracles of the Exodus. If a person is overcome by sleep he is exempt. Similarly, if he will not be able to daven Shacharit properly without a good night's sleep, he may retire to bed.

15. How should a visitor from Israel participate in the second Seder in the Diaspora?

He should participate fully in the entire Seder, except that he should not recite the following blessings:

- Kiddush (indeed he must recite Havdalah in private before the Seder begins).

- Borei p'ri hagafen on the second and fourth cups of wine.

- Asher ga'alanu on the second cup of wine.

- The blessing at the conclusion of Hallel (i.e. Yishtabach).

Instead, he should ask one of the participants to include him with these blessings. (According to some opinions, he should recite the blessing al hagefen after the first cup and recite borei p'ri hagafen on the second cup.)

How to Run Your own Seder: Everything You Need to Know

Passover Cleaning: How to Guide
Blessing on Chewing Gum
Was Rahab a Prostitute?
Extras In Our Own Epic
Comments
MOST POPULAR IN Passover
Our privacy policy