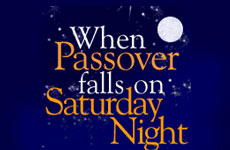 When the Passover Seder comes right after Shabbat, the rules are a whole lot different.

When the Passover seder falls out on Saturday night, immediately following Shabbat, there are a number of ramifications in terms of pre-Passover preparations.

In brief: On Thursday night, we search for chametz. On Friday morning, we put aside the chametz that we will eat on Shabbat, and the rest of the chametz is burned. On Shabbat, we are careful to control the breadcrumbs -- i.e. we eat in a designated area. The two Shabbat daytime meals are eaten one after the other in the morning. We then remove any remaining chametz that is in our possession.

What follows is a detailed summary of the laws, based on the "Code of Jewish Law" (O.C. 444) as amplified in the book "Erev Pesach Sh'chal b'Shabbos" by Rabbi Zvi Cohen.

FAST OF THE FIRSTBORN

The "fast of the firstborn" is usually held on Passover eve, but this year is moved ahead to Thursday. Those obligated to fast include a firstborn son, and the father of a first-born son who is too young to fast.

A person is permitted to break this fast if he is attending a Seudat Mitzvah -- such as a Bris Milah or Pidyon Haben. It has become customary to schedule the completion of a Talmudic tractate (siyum) on this day, since those who join in the accompanying meal are exempted from fasting.

The search for chametz is held on Thursday evening. Aside from the timing, there is nothing different about this search compared to other years. Beforehand, we make the blessing of "Al biyur chametz," and after the checking we declare the nullification of chametz (bitul).

Chametz that will not be needed for Shabbat should be burned on Friday. This should preferably be done in the morning, the same as every year. (Check with your local rabbi for the exact time.)

The sale of chametz goes into effect this year about an hour before Shabbat.

EATING CHAMETZ ON FRIDAY AND SHABBAT

Even after the time set for the burning of the chametz, it is permissible to eat chametz. However, in order that the chametz not be scattered, one must designated a place to eat it on Friday and Shabbat, and restrict it to that place. Not doing so violates the Bedikat Chametz.

One should only buy the amount of Shabbat challah which one thinks will be totally consumed. To fulfill the custom of using two loaves (Lechem Mishneh), one may use a small roll.

For Shabbat meals, we may cook food that doesn't contain chametz in the oven, stove, pots or pans that are already kosher for Passover.

If one is not able to cook in Passover vessels, one may cook in chametz vessels, but should avoid foods that generally cling to the sides of the pot. In such a case, one should not use a stove that is kosher for Passover.

Ideally the food should be eaten in new plastic (disposable) dishes, as it is prohibited to pour food from Passover pots to chametz dishes. Using Passover plates is not advisable, since bread is eaten in the meal.

One option is to eat challah at the beginning of the meal, then rinse one's mouth and wash one's hands, change the tablecloth (or move to a different table) and continue eating there, using Passover vessels without any challah. If the meal is continued in a different room, one should return to say the Birkat Hamazon in the room where one ate the bread.

PREPARATIONS FOR THE SEDER

One should prepare all necessary items for the Seder before Shabbat, such as the roasted shank bone (Ziro’ah), the salt water and Charoset. Boxes of matzah should be opened, as well as bottles of wine and grape juice (when this requires breaking a seal). The candles should be set up for Yom Tov in their holders (besides the ones needed for Shabbat). A fire should be lit, so that the Yom Tov and Havdallah candles can be kindled, and for cooking needs. When necessary, challah, trumah and ma’aser should be removed from matzah and other foods.

If one is using Romaine lettuce for Marror, be sure to should check it before Shabbat for bugs and place it in a moist and cold place to remain fresh. (The lettuce should not be left immersed in water.)

Horseradish should be ground on the Seder night and not before Shabbat, so that it's sharpness won't dissipate. The grinding on Yom Tov should be done with a minor shinui, e.g. cutting it in a bowl rather than on a cutting board. If one did grind it before Shabbat, it should be kept in a closed container.

If one lights the Shabbat candles on the table where chametz will be eaten, one should place them on a part of the table not covered by the tablecloth, so that one will be able to remove the chametz tablecloth without moving the candlesticks.

The matzot that one has set aside to be used at the Seder for the mitzvah, are considered to be muktzah and should not be moved.

One should go to synagogue services early on Shabbat morning, and also not lengthen the services unnecessarily. At the conclusion of services, one should go home right away to make kiddush, in order to eat and finish two chametz meals before the time when chametz may no longer be eaten. (Check with your local rabbi for the exact time.)

At in the Shabbat day meals, chametz should be eaten in a place separate from where the Passover foods are eaten and Passover utensils used, just as in the previous evening.

In order to fulfill the obligation of eating the third Shabbat meal (Seudah Shelishit) with bread, one should split the morning meal into two parts. Eat, say Birkat Hamazon, and then make a brief interruption by learning Torah or taking a walk. Then wash again and eat Seudah Shelishit.

Though both bread and matzah are forbidden in the afternoon, it is proper to eat meat, fish or fruit after mid-day, in order to fulfill Seudah Shelishit in the afternoon -- and also as not to be very hungry by the time the Seder begins.

It is prohibited to prepare on Shabbat for Yom Tov. One should therefore not prepare the matzot, vessels or table until after nightfall. (One may ask a non-Jew to prepare.) It is permissible though, to tidy the home, since this is a need for Shabbat.

Chametz that remains after the morning meals should be given to a non-Jew, a pet, or simply flushed down the toilet. In a town with an eiruv, one may dispose of it in the public garbage bin in the street, thereby making it ownerless. If these options are unavailable, one can pour soap or cleaning agent on the chametz, thereby rendering it non-edible.

Chametz vessels may not be washed on Shabbat. They may be wiped with a hand or with a paper napkin which can be thrown out afterwards. If this does not clean the utensils, one may rinse them slightly in order to remove the chametz. Plates may be rinsed properly only if one will need them on Shabbat, as for serving fruit in the afternoon.

One should sweep the house after the morning meals (with a soft-bristle brush) and dispose of the chametz in the same way as discussed above, taking care not to leave any chametz on the broom.

One should brush off clothing worn during the meal (by hand and not with a brush).

One should rinse one's mouth (even flossing if one's gums don't usually bleed when flossing, but floss must be cut to size before Shabbat), and wash hands so that chametz shouldn't remain.

One should then nullify the chametz (bitul) by saying the text found in the Haggadah after the burning of the chametz.

One should pray Mincha early. As in other years, some are accustomed to say the "Seder Korban Pesach" and portions of the Haggadah (from "Avadim Hayinu" until "L'chapper al kol avonoseinu").

After nightfall, the standard Yom Tov prayers are is said with the addition of "Vatodianu" in the Amidah.

Anyone who didn't say "Vatodianu" needs to say "Baruch hamavdil bein kodesh l'kodesh" before doing any melacha, such as lighting the Yom Tov candles or cooking for the Seder meal.

The rest of the Seder continues as on other years. Enjoy!

Rabbi Daniel Schloss was born and raised in Amsterdam, Holland. In 1983 he came to Israel and studied at Yeshivat Aish HaTorah in Jerusalem. Many years later, under the guidance of Rabbi Yitzchak Berkovits, he received rabbinic ordination from Rabbi Avraham Kopshitz and from Yeshivat Aish HaTorah. Over the past three decades, he has been teaching practical Jewish Law in Aish Jerusalem and has published several booklets on Jewish law that are being used around the world. Concurrently he is Aish HaTorah Jerusalem's HR Manager . He lives with his wife and family in the Har Nof neighborhood of Jerusalem.

What Makes It Kosher?

The Search for Chametz
Seeing Without Eyes
Why Shouldn’t We Eat Whatever We Want?
The Power Of Prayer
Comments
MOST POPULAR IN Passover
Our privacy policy
Aish.com Is Looking for Great Writers