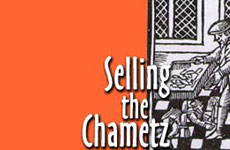 Pack up your crackers and sell them for a week.

One of the institutions of traditional Jewish life as far as Passover preparations are concerned is the "selling of the chametz." The Torah commands Jews not only not to eat chametz during the week of Passover, but also not to possess chametz during that time.

For many Jews, both in ancient and modern times, that demand is simply met by removing all chametz from one's home and property and disposing of it by destroying it or giving it away to non-Jews. And for many centuries, since most Jews were able to deal with their chametz in this simple manner, there was no uniform, institutionalized method in Jewish life of making certain that chametz was not "possessed" by Jews during Passover.

This situation began to change in the late Middle Ages. The catalyst for this change was the fact that Jews were increasingly involved in the production and sale of liquor in Europe. Almost all liquor was made from a fermented grain base and was thus chametz. Jews who owned distilleries or warehouses or taverns full of barrels and bottles of liquor were faced with a crisis when Passover came, since they could not "possess" that liquor during the holiday.

To further compound the dilemma that they faced, there is a rabbinic prohibition against deriving any benefit from chametz that was "possessed" by a Jew during Passover -- a benefit prohibited even after Passover. To meet the exigencies of the situation, the formal sale of chametz to a non-Jew for the Passover period was institutionalized by the rabbis.

This sale had to accomplish two things. Firstly it had to be legal and binding, so that in truth the non-Jew was the actual owner of the chametz during the time period of Passover. Secondly, and almost as importantly, the sale had to be so arranged so that the Jew would be able to repurchase the chametz from the non-Jew after Passover for a nominal amount. If this second aim was not achieved, then the whole purpose of the sale would be defeated, for the Jew would not be able to operate and remain in his business.

The rabbis therefore invested a great deal of ingenuity and creativity in structuring the sale so it would be truly legal -- and yet the Jew would be protected as far as his rights of repurchase after Passover was concerned.

The drive for full legality of this very technical sale was so strong that a question arose in the 19th century in the Austro-Hungarian Empire. There, the government had instituted the necessity for tax stamps to be affixed to all contracts of sale. The documents of sale that the rabbis used to sell chametz to non-Jews never contained such tax stamps, and thus some in the Jewish community questioned the legality of the sale. The rabbis of Austria-Hungary appealed to the Emperor to issue a special waiver of the necessity for tax stamps on the sale of chametz. The Emperor did in fact issue that waiver based on the understanding that the sale was necessary in order to fulfill a religious obligation of the Jews.

This reasoning of the Emperor was itself disturbing, since it somehow implied that this was a religious sale and not a commercial transaction. Nevertheless, the rabbis deemed the sale sufficiently legal to satisfy the requirement that the chametz was not possessed by Jews over the Passover holiday.

The institution of "selling of the chametz" also became a source of rabbinic income over time. The Jews paid the rabbi of the community a fee for representing them and arranging the sale of the chametz of all of the individuals of the Jewish community to a trustworthy non-Jew. It also became a source of income, sometimes significant, to the trustworthy non-Jews who annually bought the chametz of the Jewish community.

Many times, the right to buy the Jewish chametz passed down by inheritance from father to son. Thus, it was not only the Jews who looked forward to the coming of Passover and the celebration of Jewish freedom.

Laws of the Seder

A Passover Dictionary: What Do All These Strange Hebrew Terms Mean?
For Every Individual, A Torah Scroll
Allegiance To The Monarch
Meet the Real You: Yom Kippur
Comments
MOST POPULAR IN Passover
Our privacy policy
Aish.com Is Looking for Great Writers