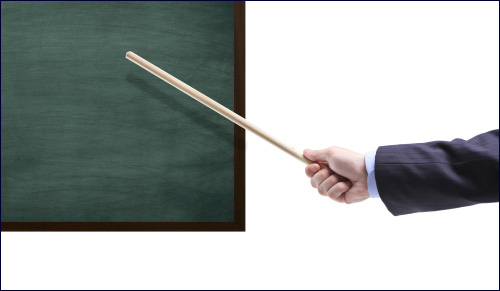 Don't let your idea remain a hazy notion in your imagination. Transmit it to others and make it a reality.

Most people don't think of themselves as teachers. "Me? A teacher?!" We view teaching as a profession that requires formal training and certification. Besides, we reason, there's probably a "natural ability" that makes someone a good teacher.

Way #12 is pilpul hatalmidim – literally "discussions with students." To attain wisdom for living, teaching needs to be a basic way of life. Why? Because if you can't teach an idea, then you don't really know it yourself.

Remember in school when the math teacher asked, "Who knows this equation?" You raised your hand, and she said, "Go ahead, explain it to us." You started off, "Well, umm..." You thought you knew, but when you tried to teach it, you found out otherwise.

Having to explain an idea to others forces you to clarify it for yourself. You examine everything much more thoroughly – the details, logical progression, etc. And you'll become personally moved by the idea. As the Sages say: "I learned a lot from my teachers. I learned even more from my colleagues. But most of all, I learned from my students."

Until you share an idea, it's not yours. It remains but a hazy notion in your imagination. Transmitting the idea to others makes it real. You've taken it out of potential and made it a reality. By reaching others, you will reach yourself.

Teaching is also a profound moral obligation. Why? Imagine someone knows the cure for cancer and doesn't share it. He's content to let everyone suffer. What is he? A murderer!

Now realize that the worst disease – the most destructive, painful, most contagious disease of all – is ignorance. Ignorance perverts people and leads to wasted, counterproductive lives. Ignorance causes untold suffering – mistreatment of children, marital strife, and suffering in a dead-end job. All out of ignorance.

If you understand something about living and don't share it, you're a brute. There is something in you that says, "I don't care about other people. I'm a lone wolf, a rogue elephant." To live in a vacuum is not human. Do you see this?

For example, if you know the key to happiness, teach it. Do you see human beings walking around depressed, half dead? Give them some joy. Otherwise you'll always bear the knowledge of what you "could have done."

When you reduce ignorance in the world, even by a little bit, you give a great gift to mankind. Some diseases only a doctor can treat, but ignorance can be cured by everyone who takes wisdom seriously.

The Drive to Communicate

Everyone enjoys making a difference in people's lives. Ninety-nine percent of the world – whether journalists, psychologists, dentists, etc. – are motivated (at least in part) to help others. It's a basic human drive. And the more people we positively impact, the better we feel about ourselves.

You know how to play baseball, right? If you see someone holding the bat upside down, what will you do? He swings wildly once, twice. Then you walk over and say, "Pardon me, I'm not criticizing, but if you hold the bat the other way, you'll get a more powerful swing. Why don't you try and see how it works." You'll teach him what you know because it hurts to watch someone wasting his time – even if he's on the opposing team!

Teaching is a way to build an eternal bond with another person. Remember how your aunt taught you to whistle? Now realize that this satisfaction is even greater when you share an insight into living.

Don't sell yourself short. You have the ability to make a positive impact. You don't have to be a social worker or a doctor. With one piece of wisdom you can help humanity.

Think back to growth experiences that changed you. Perhaps something made you more mature. Or enabled you to take disappointments better. Or to be more independent, or more tolerant of others. If the memory has stuck with you, then it's worth sharing with others.

Imagine that a child is sick with a rare disease. If it's an acquaintance, you'd probably say, "Oh, that's terrible. What a pity."

If it was your cousin, you'd take some personal responsibility, perhaps researching information on the Internet.

If it was your own child, you'd leave no stone unturned.

I know a young couple – he's a businessman and she's a doctor. They found out that their two young children had Gaucher disease, a debilitating condition that is handicapping for life, and sometimes fatal. So what did they do? Together they founded an organization, committed to finding a cure for Gaucher disease. She conducted the medical research and he raised the money.

There was no guarantee of success. But inasmuch as it was their own children, there was no alternative but to try. And the Almighty helped them. After six years, they developed a synthetic enzyme which can effectively treat the condition – and their two children became the first in the world to have a hopeful prognosis.

So how do we get motivated to help?

We've got to care.

When we care enough, we will make the effort.

Yawwwwn. There he goes again with another soliloquy...

When you teach, don't recite a manifesto. What you're teaching has to be relevant. Teaching means to reach someone, to get him to appreciate what you feel is important.

You may want to start with a joke or story to get his attention and draw him in.

Encourage your students to ask questions that unlock the essence of the message. When someone asks a question, it's a sign he's in the learning mode. But when being lectured to, people's minds may wander – and not come back until it's time to go home!

Never lose sight of your audience. You have to "feel" how they're reacting to your message. People are generally willing to listen to anything – if it's said in a way they can appreciate and understand.

Be clear and concise. Pinpoint in stark, simple terms what you want to communicate. If you can't summarize your message in one or two sentences, it's not clear enough in your mind. And unquestionably, your listener will end up confused.

Imagine you're 12 years old and your kid brother is messing up your room. "You'd better not mess up my room or I'll beat the bejabbers outta you!" Is the threat of violence what you want to communicate? No. You really want him to know that it's impolite to mess up someone else's room, and there may be consequences. That's more to the point, right?

Now, how will you communicate this to him? Not how will you aggravate him, challenge him, dare him, antagonize him, and make an enemy out of him. Rather, how will you reach him? Take the time to figure it out.

Now let's refine the message. "My dear brother, just as you don't enjoy having your room messed up, I don't want my room messed up, either." That's a lot better. Now you've taught him an important principle for living: "Love your neighbor as yourself."

I'm no preacher! Who am I to tell people what to do?

Preaching is giving over information with fire and brimstone, without paying attention to what your audience is feeling. A preacher instructs: "I'm the authority...I'll straighten you out... Accept what I say... Don't question... Park your mind... Listen to me... Obey me!"

Preaching is being a demigod, getting people excited and overwhelmed and moving them with an emotional sway. That's not teaching. That's brainwashing. And that is totally not the Jewish way.

What is teaching? Teaching is communicating to an independent human the clarity of a concept. To teach is to get others to see and understand it on their own terms. To enable the student to get in touch with what he already knows – and re-discover it on his own.

An impassioned teacher can be inspiring and uplifting, but ultimately, a teacher has to be able to convey ideas in a way that emotions don't interfere and distort the message. You see the difference?

If you're teaching in the sense of "I'm going to straighten him out," then nobody will listen. Speak "with" people, not "at" them. And be open to feedback: "If I'm wrong, please correct me." Give your student enough space to weigh the evidence and make his own decision. Be confident that truth will prevail. Otherwise you're just forcing it down his throat.

Know your material inside and out. Before communicating an idea, review the main points. This builds confidence, so at the moment of teaching, you can focus less on content and more on presentation.

You can't recite dead notes. Even if you've already taught the same material 100 times, it has to be real to you. It has to invigorate you. This will translate into your personal sincerity coming through. For as the Sages say: "What comes from the heart, goes into the heart."

It is best to review on a schedule, at least once a year. You'll be in good company: The Talmud says that God reviewed the Torah fours times before transmitting it to Moses!

It's possible to be exposed to an idea, think you understand it, and almost totally miss its point. That is why people are sometimes inconsistent – and even contradictory – in their actions.

Teaching is not just conveying bits and bytes of information; it's about affecting a change in behavior. Figure out how to transmit an idea, so that others will not only appreciate it, but will actually put it into practice. Otherwise, you haven't succeeded in "teaching."

Develop a good lesson plan. Work through the stages of bringing people to actual implementation.

Why is "Teaching" a Way to Wisdom?

Way #4: Introduce Yourself to Yourself
It Takes A Lot Of Faith To Be An Atheist
How Instagram Brought Back This Nostalgic Soup
What Makes Eli Run?
Comments
MOST POPULAR IN Spirituality
Our privacy policy