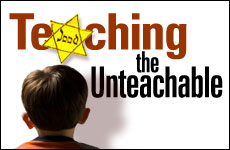 Torn between our urge to shield our children from evil and our obligation to tell them the truth about the Holocaust.

My son has been badgering his father and me to see "Defiance," a film about a group of Jews who escaped death during the Holocaust by living deep in the woods. James Bond star Daniel Craig plays the lead role of Tuvia Bielski, who, with his brothers, protects about 1,000 Jewish refugees.

No doubt my son is interested in seeing "Defiance" because he imagines an exciting James Bond vs. the Nazis flick. And on a purely superficial level, "Defiance" does fit that bill.

But even an 11-year-old will not be able to escape the other realities portrayed in the film: the anti-Semitism of the Russians who are also fighting the Germans, how families became separated during the war and then learned second-hand about a wife, a parent or a child who was murdered. And even though "Defiance" is far from the most graphic of Holocaust movies -- could any film be as wrenching as "Sophie''s Choice"? -- that an old farmer would sooner sentence hundreds of Jews to death rather than take the rap for a missing container of milk is a lesson in human nature that even an 11-year-old won't be able to miss.

I was close to my son's age when I first learned about the Holocaust in depth. I can still picture the slides my Hebrew school teacher projected onto the pull-down screen that hung in front of the blackboard. Many were of emaciated Jews crowded into barracks, some were of Jews being transported to concentration camps in windowless railroad cars, and there were always a couple of photographs of Jews forced to walk in the gutters of Europe with yellow stars clinging to a worn coat. Those grainy snapshots were painful to look at, but they were not the ones that haunted me. It was the photographs of rooms piled high with eyeglasses from Jewish faces, human hair shaved from Jewish heads, and shoes worn on Jewish feet, many tiny, that did me in.

What's the "right" age is to teach a child that 6 million of your extended family were murdered in the most barbaric of ways?

Somehow, when I wasn't looking, I moved up the generational ladder. Now my children are on that rung where they will learn about the Holocaust. I'm not sure what the "right" age is to teach a child that 6 million of your extended family were murdered in the most barbaric of ways, but at 11 and 14, my children seem old enough -- if there is such a thing.

Of course my son knows the basic definition of the Holocaust. But there is no way, at age 11, he can truly contemplate the undertaking required to kidnap 6 million people from their lives, and assassinate them one by one. Thankfully, he is too young to imagine the number of people who had to remain silent for a catastrophe of this magnitude to occur.

Not much is left of my 14 year old daughter's Holocaust innocence. Lessons taught in religious school, reading "The Diary of Anne Frank," and generic middle school history lessons took care of that. Whatever innocence my daughter has left is short-lived because her ninth-grade English class just started reading "Night" by Elie Wiesel, the Pulitzer Prize-winning first-person account of life inside a concentration camp. One reader aptly described Wiesel's graphic account of events as "the longest short book I have ever read."

By page 22, my daughter had already learned a lot. Maybe too much.

"Mom, did you know the Nazis made Jews dig trenches and then shot them and pushed them into the trenches they had just dug?" "Can you believe that soldiers would throw infants in the air and use them for target practice?" And her final question, "Why are we allowed to read this book without a parent's permission, but we were required to get a permission slip for other books?

Why? Because the permission slip, for the sake of full disclosure, would have to say something like this: "Your child has been assigned to read the book 'Night' by Elie Weisel. We would like your permission to forever change the way your child looks at the world, to shatter her innocence about the depths of evil, to singe images into her brain she will never be able to erase. Be advised that if your child currently believes that humanity is basically decent, this book will instantly cure her of that illusion. Be further advised that if your child believes that God or you *or* your spouse will always protect her from evil, this book will teach her otherwise. And if your child is currently under the impression that another Holocaust is impossible, she will start to question that belief when she learns that the Jews of Europe thought it was impossible too. Sign here ______."

The reason that there is no permission slip for the book "Night" is because, if there were, no parent would sign it. Yet, none of us call the school and object because we know that Elie Wiesel's explanation of why we have to burden our children with the details of the Holocaust is right: "to prevent the enemy from enjoying one last victory by allowing his crimes to be erased from human memory."

Soon I will see "Defiance" for the second time-this time with my son. On screen, he will witness Jews fighting Nazis. He will be oblivious to the battle raging off-screen: the battle between our urge to shield our children from evil and our obligation to tell them the truth.

Wendy Jaffe is a freelance writer, the author of The Divorce Lawyers'' Guide to Staying Married (Volt Press, 2006), and an AOL relationship coach.

We Are One: Music Video

A Woman Called Me and My Family Ugly Jews
It Takes A Lot Of Faith To Be An Atheist
How Instagram Brought Back This Nostalgic Soup
What Makes Eli Run?
Comments