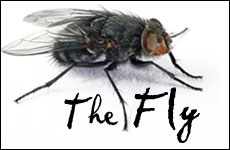 Why did God create the lowly, pesky fly?

Some insects have it easy. Take the ladybug for example. Technically speaking she's a beetle, the same thing people trap by the thousands in their yards in those yellow "you may enter but never leave" hotels. But come on. She's a ladybug. She's pretty. What kind of a deranged person would purposely squish her?

But life's not so easy for a fly. How would you like to be the one creature in the world whose all-encompassing desire in life is to lay eggs on things that are dead, putrid, or rotting?

And does anyone really appreciate what the fly does for us? Found by dumps, dung, and death in every human habitation everywhere, flies provide the world with offspring whose one true joy in life is to eat other people's garbage. But does anyone appreciate these courageous creatures who clean up everyone else's mess?

A fly comes around and everyone gets annoyed. "Buzz off, fly!" they say. "You're not welcome at our picnic."

The fly actually goes all the way back to the sixth day of creation. God said to Adam and Eve, "Listen very carefully. See that tree over there? The one with the really tempting fruit? Don't eat the fruit! You kids got that? If you're hungry, there's plenty of other good stuff around, but don't eat that fruit. Got it?"

"With You all the way," the woman says.

And we all know what happened after that. As soon as God turns His back for a second, the snake makes an aggressive sales pitch; the woman buys into it, eats the fruit, shares with her husband, and crashes the world into a dismal 6,000 years of history.

"The soil will be cursed because of you (Genesis 3:17)," God says, doling out the punishment after the crime. Rashi, one of the Torah's top commentators, explains the verse to mean that from now on, the ground "will produce accursed things for you such as flies, fleas and ants."

Accursed flies. A punishment on mankind. No wonder they're so unpopular.

The Talmud tells us that "The evil inclination is comparable to the fly" (Talmud, Brachot 61a). In that little lesson lies one answer to the question.

The fly has been endowed by its Creator, perhaps as a counter-balance to its unpopularity, with uncanny tenacity. It is persistent all out of proportion to its size. No matter how much it is hated, the fly just keeps buzzing away as if it was the most popular guy at the party. Shoo it away once, twice, a thousand times and it just keeps coming back. Attempt to hit it with your palm and it refuses to take the hint. Reach for a fly swatter and try to put a sudden end to its good time and it keeps hanging around, buzzing happily away.

When we say that the evil inclination is like the fly, it means that lower, baser part of ourselves shares some of these same characteristics. We may think we've shooed away our drive for escape and comfort, but before we know it, it's buzzing around again. We may think our lives are clean and orderly, but when that evil urge comes buzzing around, it means that somewhere nearby there's something spiritually dead, putrid, or rotting.

So what's the solution to this fly problem that pesters mankind? The wise take the Torah's lesson to heart. Confronted with such an enemy, the righteous match the fly's persistence with their own. They never give up on the struggle to be good. They fortify themselves to confront their daily challenges, both internal and external, and push themselves to choose good. They clean up the spiritual filth from their homes and their offices, and where that's not possible, they at least put up some very good screens on their windows.

Did Life Start by Accident? The Missing Pieces

Firefly
Why Are The Prayers Of Yom Kipur So Repetetive?
Ha'azinu 5783: A Time for Unity!
Twisted Thinking
Comments