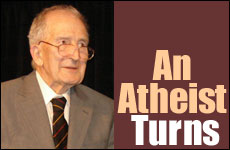 Unable to disprove the message, The NY Times tries to discredit the messenger.

On Sunday November 4, 2007, The New York Times Weekend Magazine featured an article, The Turning of an Atheist, written by Mark Oppenheimer. It describes the conversion of arch-atheist, philosopher, Antony Flew into a believer. In the article I am cited 21 times by name as the arch-offender in the abominable act.

Flew had authored an article in the mid-1950's, "Theology and Falsification" and presented this thesis at the Socratic Club of Oxford University, presided over by none less than C. S. Lewis. Many felt it was a brilliant and invincible proof for a godless world. Over the decades that have followed it became the consistently cited landmark confirmation for atheists

And then, a few years ago, Antony Flew met Roy Varghese, a successful high tech entrepreneur who spaces his time between Dallas, Texas and India. Roy had written several books on the magnificence of creation and urged Antony to read his book "The Wonder of the World" and my third book, "The Hidden Face of God." Those two books were Antony's undoing.

In 2004 Flew announced that the discoveries of modern science have made it abundantly clear that the creation of the universe must be the work of an infinite Intelligence.

In 2004 Flew announced that the discoveries of modern science have made it abundantly clear that the creation of the universe and of life and consciousness from non-living inert matter must be the work of an infinite Intelligence and not the result of random acts of an unguided nature. This revelation, in which Flew also apologized for having misled so many souls over the decades since his "Theology and Falsification," was extraordinary news. Yahoo, in its daily news summary, even listed Flew's recantation as one of the five major events of the day. Roy released a DVD titled "Has Science Discovered God?" In it, Flew and I discuss the facts of nature, not speculations, that had such an impact on Antony. Here in a bit of irony, Flew tells us that he follows the creed of Socrates, "I go to where the truth leads me." Recall that his original argument was presented at Oxford's Socratic Club.

In October 2007, Flew's book, "There Is a God: How the world's most notorious atheist changed his mind," was published by HarperOne. This was already too much for Oppenheimer and also so it seems for The New York Times. In a scathing article, Oppenheimer attempts to portray Flew as a duped and senile philosopher, unaware of the ways of the scientific world. Yet Oppenheimer brings no arguments against the science. Because he can't. The science is fine. So his only approach can be against the veracity of Flew and me.

The supposedly senile Flew sums up brilliantly Oppenheimer's vitriolic attack on him and me, "If you can't disprove the message, then try to discredit the messenger."

For me, this has been an awakening of the obsessive lengths to which the anti-God community will go to maintain its control over what is taught in schools. My reply, edited by the Times to the 150 word limit, appeared a few weeks later:

Mark Oppenheimer [NY Times 4 November 2007] mentions me as a source for "the science" that "turned" Antony Flew from skeptic to believer. Some people may believe that Flew, being old and therefore possibly senile, was duped by this "pseudoscience." Let's look at just one aspect of our cosmic genesis. As Antony Flew realized, as does any objective evaluation of this cosmic genesis reveal, the wonder is not whether it took 6 days or 14 billion years, or even an eternity. The wonder is that it happened. The energy of creation became alive, sentient, learned the emotions of joy, love, boredom. There is not a hint of sentience in the electromagnetic radiation that marked the creation or in the 92 elements that the radiation eventually formed. But in an exotic combination of these elements we discover the self-awareness of life.
Gerald Schroeder

And that is truly the wonder of the world, our world. By a micro-second following God's creation of the world, the Big Bang Creation, the material world was composed almost exclusively of electromagnetic radiation, in simplistic terms, super powerful light beams. According to the Ramban, this was the only physical creation. All other creations were spiritual. Our bodies, not our souls, are made of the light of creation. No wonder that God, upon expelling Adam and Eve from the Garden dresses them in oahr spelled with the Hebrew letter ayin, which means "skin" in Hebrew. Before that while in the Garden they were dressed in oahr, but spelled with an aleph, meaning "light."

The most powerful challenge to an atheist's view of the world lies within the world itself: the simple reality of existence.

The most powerful challenge to an atheist's view of the world lies within the world itself: the simple reality of existence. Why is there existence? Forget things as complex as life. Just consider the being of anything: space, time, matter in any form. Is there some "law," some axiom, that demands there be existence independent of an underlying force that brought it into being? Even if we posit that the universe and all existence is eternal, the question remains: why is there an "is"? It's a question that calls out for an answer. Of course the facile response is if there were not existence, then we could not ask the question. True, but we do exist and so it is a puzzle that demands probing. The greatest self-revelation of a Creator is the creation It brought into being.

Moses, in his closing message to the Jewish people, tells us that if we want to discover the Creator, "Remember the days of old; consider the years, generation by generation" (Deuteronomy 32:7). "Remember the days of old" -- the Ramban relates this to the six days of Genesis, the wonder of the flow of nature. If that is not enough to convince one of a God active in this magnificent world, then consider the years, generation by generation -- the flow of social history. In every age there are miraculous wonders that reveal the hand of our Creator active
within the creation. We don't have to go deep into history. The past 60 years are more than adequate to show God's hand. As David Ben Gurion is quoted, "If you live in Israel and you don't believe in miracles, then you are not a realist." We live in a land of miracles. Just look around.

Dr. Gerald Schroeder earned his BSc, MSc and Ph.D. in Nuclear Physics and Earth and Planetary Sciences at the Massachusetts Institute of Technology where he taught physics for seven years. While a consultant at the U.S. Atomic Energy Commission he participated in the formulation of nuclear non-proliferation treaties with the former Soviet Union and witnessed the testing of a long series of nuclear weapons. He has served as a consultant to various governments worldwide and has been published in Time, Newsweek and Scientific American. He is the author of Genesis and the Big Bang, The Discovery of Harmony Between Modern Science and the Bible. He is also the author of The Science of God, The Hidden Face of God and God According to God. His works appear in eleven languages. Dr. Schroeder is a lecturer at Aish Jerusalem for the Discovery Seminar, Essentials program, Jerusalem Fellowships and Executive Learning Center – focusing on the topics of evolution, cosmology and age of the universe. Contact info: gschroeder@aish.com

The Mysteries of Snow and Lightning

The Circle of Life

Is There Such Thing As "Now?"
Megillah Gorilla Saves the Day
Challah Reuben “Grinder”
Big OnThe Little Things
Comments
MOST POPULAR IN Current Issues
Our privacy policy
Aish.com Is Looking for Great Writers