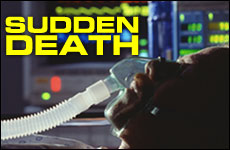 Like the Purim miracle, God's intervention turned our worst fears to joy.

On January 1, 2009, when most of the world was celebrating a new year, the universe stood still for my family.

My husband's heart stopped. He was teaching calculus in a yeshiva in Efrat and collapsed in class. His students and the students in the next class sprang into action. They simultaneously did heart massage (that kept the blood feeding the brain, that made the critical difference), ran for the dorm rabbi who was an army medic who did mouth to mouth, and contacted MDA (Magen David Adom) who sent the Efrat emergency medical team at the speed of light; they shocked his heart to get it working again, though he did not regain consciousness.

Yaakov was rushed to the hospital and treated with a combination of induced coma and hypothermia, whose goal is to protect the brain. The terms the doctors used at the Shaarei Tzedek Medical Center, when speaking to me, were, "If he wakes up" and "to reduce the brain damage…"

That Friday and Shabbat were long and thoughtful. I felt shock more than worry or pain. I couldn't let go of the book of Psalms, even though I didn't read from it every minute, and spent time just watching him and thinking. The night before when the doctors sent me home to sleep, I made the mistake of surfing the net for an hour on "ventricular fibrillation." I understood what the main possibilities were: he could die, he could end up in indefinite coma limbo or with significant brain damage, or with lighter brain/neurological damage.

There was the rarer possibility that there would be no brain damage or neurological disability at all. The doctors did not talk about this, perhaps in order to not raise my hopes. I wondered which of these consequences God had decreed for my husband and our family.

I felt what Jews must have felt when Haman's decree was like a knife at their throats.

In a very personal and individual sense, I felt what the Jewish people must have felt when Haman's decree was like a knife at their throats and they had no idea whether or not they would survive. I had recently taken to thinking, "God always has a plan." I beckoned that belief now. It gave me comfort and purpose.

My children and I left Yaakov's bedside for a little while to share a Shabbat meal in the Shaarei Tzedek dining room, during which time I looked around the table, at the paleness we felt without his presence, and thought, "No matter what the outcome is, this may be the rest of your life."

The nurses wouldn't let me sleep in Yaakov's room, and his sister, who works in the hospital, had arranged a small room for me. Sleep would not come, and finally, at 4:45 AM, I slowly climbed the steps back to the tenth floor ICU, bracing myself for disappointment. They had told me it could take days for him to awaken, even after they had stopped the coma medicine (about eight hours earlier).

I approached the room and saw, from afar, an eyelid flutter.

Yaakov awoke almost 34 hours after the coma was induced, early on Shabbat morning.

That afternoon my children and I already laughed and sang Sabbath songs with him.

A friend stopped by the next day and asked Yaakov what he was teaching just before he lost consciousness. He proceeded to explain by giving a short and lucid recap of his math lesson. He read books we brought him from home and from the hospital library, and spoke about the articles and books he'd like to write.

The fact that he was alive and with no brain damage after an event of ventricular fibrillation, which has a low survival rate when it happens outside of a hospital, was considered, in our layman's language, a miracle – part of the miracle being that he got such excellent and immediate medical care due to the students. The doctors who treated him said it was one of their great successes of recent time.

It is frightening because it is something that can happen at any age, without any warning, and it is usually fatal. While Yaakov was in the induced coma, the students in the school and much of the community were immersed in the saying of Psalms; he is a very beloved teacher of math, Hassidut and Talmud, and a ba'al koreh (Torah reader). I sent a message to the students and to the community requesting that in addition to the saying of Psalms, everyone take upon themselves the quality of "dan l'kaf zchut" (giving someone the benefit of the doubt) regarding one person against whom they have a complaint. This would serve as a merit to my husband who excelled in this quality.

The note on his hospital discharge sheet read: Reason for hospitalization: Sudden death.

When the head of the education department and the mayor called asking what they could do, I asked that the principals and the local council encourage as many students and adults as possible to volunteer for MDA and to learn CPR.

When the Rosh Yeshiva of the school came to visit my husband after he had awoken, he made the blessing on "God who has brought the dead back to life," using the full name of God – a rare occurrence. This was confirmed by the head of the Efrat emergency medical team and by the note on his hospital discharge sheet: Reason for hospitalization: Sudden death.

Six days after Yaakov entered the hospital, he walked out alive and well and with a mind sharper than ever, with a defibrillator implanted in his chest. Four days later he was teaching part time; the following week, full time. (One of the first questions he asked when he awoke had been, "Who will prepare the students for their matriculation exams?") The week after he left the hospital he was reading the Torah in shul again.

When friends ask me how he's doing, I just say, "Baruch Hashem." When they ask how I'm doing, I say, "It's a life-changing experience. I've been trying to be a better person, and it's exhausting!"

The SMS I sent to friends and family when the Shabbat was over had been a one-liner: "Hodu l'Hashem ki tov" – Give thanks to God for He is good.

We don't know what God plans for us. When things look bleak, we have our faith to hold onto, our loved ones, our prayer, and the memory that once, long ago, the Jewish people led by Mordechai and Esther, did not despair, and a miracle brought them through the darkness.

May we all experience blessings and light in the days to come.

Who Will Save the Baby?

Arriving At Sinai
In the Shadow of David and Goliath
Where Do the Laws of Nature Come From?
Saadiah Gaon, Rashi and Maimonides: How Three Rabbis Revolutionized Judaism
Comments