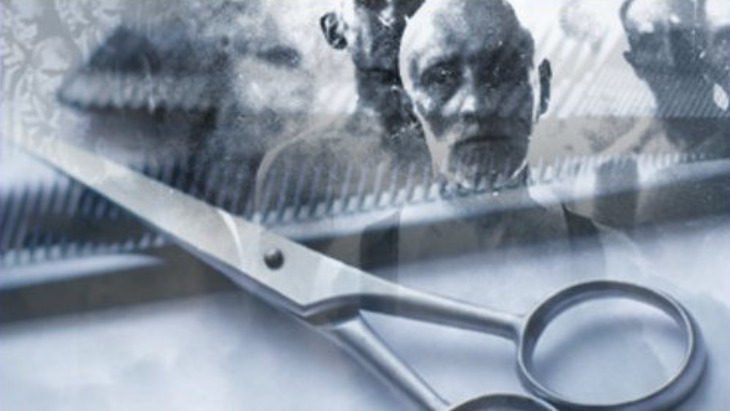 After discovering my local barber's dark secret, no haircut has ever been the same.

There was something about my barber, Morris.

I was always drawn to this affable, Mr. Hooper look-alike with the Popeye laugh, who greeted me with a smile each time I entered his popular Bronx barbershop along with my father and younger brother.

The adult customers who flocked to him – Jews, Italians, Irish – sat in cream-colored, vintage barber chairs. Children had other amenities: an elevated, gleaming red fire truck and a box forever filled with candies.

I may have been only six-years-old, but Morris made me feel like a grown up.

"Nu, calegaleh, how do you want the neck? A square-back or natural?" he'd ask, invoking the affectionate Yiddish word for colleague. Then he'd wrap the white-cloth smock around my neck, close the snaps, and remove my yarmulke. 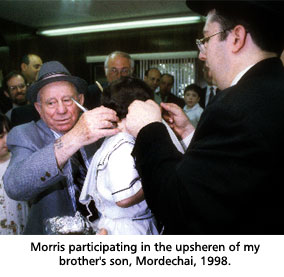 "Careful with the peyis!" my father, who was Morris' rabbi, would warn him, while directing the haircut like a movie scene. Morris would then clip my side-locks precisely at the cheek bone.

The mere touch of Morris' loud, vibrating electric razor at the base of my neck would tickle my funny bone, triggering fits of hysterical laugher. "Nu, zai shtil!" Morris would whisper, in a futile attempt to get me to stop fidgeting.

Then, in the haircut's final moments, he'd bring out his secret weapon – what he dubbed the "hot comb" – in a semi-successful attempt to tame the two stubborn cowlicks at each corner of my forehead. "Horns," I called them.

The rest of the time Morris would converse with my father in Yiddish. I couldn't understand a word, but the deep sighs and long pauses spoke volumes.

And all the while there was the perpetual, almost haunting, sounds of Morris' scissors.

Aside from my regular visits to his barbershop, I would see Morris at my father's synagogue when he'd come to recite the Yizkor, or Memorial Prayer, during the holidays.

I would learn that the off-blue "KL" tattooed onto Morris' right forearm – the mark I stared at for years – was from a concentration camp.

On those occasions, I would notice a different man. Morris didn't mingle with his fellow congregants, nearly all of whom were his customers. He'd sit in the back row and stare blankly into his prayer book, sometimes straight ahead, seemingly into nowhere.

Over time, I would learn that Morris, along with my father and nearly the entire congregation shared something in common: they were survivors of the Holocaust.

I would learn that the off-blue "KL" tattooed onto Morris' right forearm – the mark I stared at for years – was from a concentration camp, and I would take note of the repeated references to Nazis in Morris' Yiddish conversations with my father.

I would learn that my name wasn't merely biblical: I was named for my paternal grandfather, who was murdered together with one of his sons and more than 50 Jews in July of 1941.

For me, Morris' lonely, sad, and detached synagogue demeanor overshadowed his barbershop persona. In a congregation of Holocaust survivors who seemed otherwise happy and well adjusted, Morris somehow stood out. His sighs could move mountains.

But I did not dare approach him.

During my high school years, as I drifted away from home, I drifted away from Morris. With my adolescent desire for "space" came the desire to replicate my friends' perfectly layered, designer haircuts. The bangs were combed back. The barbershop on White Plains Road was replaced by a trendy Manhattan salon with pulsating music, free of parental direction, Yiddish, and signature sighs.

Over the years I would see Morris in synagogue and feel guilty. He would look at my assorted holiday haircuts – one year he saw a perm gone awry – and ask: "Who's giving you haircuts? Er hut tzvei linkeh hendt (He has two left hands)!"

It was not until I was a 31-year-old graduate student in journalism in search of a documentary subject that I had my first in-depth encounter with Morris. I sought out this man – who had since retired but continued to cut his rabbi's hair at our home – determined to unravel the mystery of his past.

"What would you like to know?" he replied in his heavily accented English. "Come up to the house, and we'll talk."

Several days later I visited Morris and his wife at their Bronx apartment. A faded, black and white picture immediately caught my eye: that of a baby girl in a carriage.

"You've grown," said Morris, who hadn't seen me as often since my move to Manhattan. His wife, Fela, emerged from the den with an old color photo: it was from my brother Isaac's traditional first haircut at age three. The year was 1969, and pictured with my brother was Morris, holding his trademark scissors.

"I had a child, once... She was only five years old when they took her from me."

"I had a child, once," he began. "Her name was Rivkaleh. She was only five years old when they took her from me."

Then, Morris, who must have been 80 years old at the time, held out his hands.

"You see these?" he asked. There was a slight tremor in his hands, which were thick, tinged with red, with hardly a wrinkle. "These kept me alive."

"I don't understand," I politely replied, hoping he would elaborate.

"The Nazis needed barbers in the ghettos and in the camps," he said matter-of-factly. "Why else would they keep me alive?"

As I sat there, my mind raced. I imagined Morris some 50 years earlier in a striped prison uniform. I stared at his hands – the very same hands that for years caressed my face, offered me candies, and shielded my eyes when he trimmed my bangs. My thoughts turned to others who sat in his barber chair during the war in Poland: German SS officers who came for their daily shave, and countless Jews whose hair was sheared before entering the gas chamber.

Over the course of two hours, Morris described the harrowing tale of his daughter's murder. He said he dreamt of her often and still wonders whether she could have been saved.

"A Pollack once begged me to give him my girl," he recalled. "He wanted to raise her. She had blonde hair and didn't look Jewish."

He told of his experiences in five concentration camps, his liberation from Dachau, and his arrival in the United States with his first wife, who by that time was ill and could no longer have children. She died in 1970.

"Doss iz iss," Morris said in Yiddish, summing up with a deep sigh. "That's the way it is. There was nobody to cry to for help."

I learned how he prolonged the lives of fellow inmates by sharing with them the food rations he earned as a barber. And I learned of his encounter with his daughter's murderer when he testified against him at a war crimes trial in Germany.

"I spit him in his face, that Nazi bastard," Morris said, in his only visible display of emotion.

In the year following my interview with Morris, I returned to him, making sure to be present at my parent's home every time he cut my father's hair.

Now I wanted Morris to cut my hair.

Following my aliyah to Israel I maintained contact with Morris, speaking with him before the Jewish holidays. He would emerge from retirement to give the traditional first haircuts to each of my brother's four sons.

My father and Morris have since passed away, and no haircut has ever been the same.

More often than not, the barber chair feels cold. My memory drifts back to the Bronx, to the voices and images of two men who shared their past and their pain in a bi-monthly series of conversations that spanned 40 years.

And I can still hear the scissors.

Today, Morris' old barbershop is a stationery store. The legacy of that space, receded into history, is unknown to a new generation of residents. But for me, the light in the store still burns. The barber's pole on White Plains Road beneath the elevated subway line still turns.

"What's it gonna be?" a bi-lingual barber in his forties asks me before beginning a recent haircut in Jerusalem .

Mordechai I. Twersky, a freelance writer and broadcast journalist, is a doctoral student in Jewish history at Bar-Ilan University in Ramat Gan, Israel.

The Chasid who Built a Church

Revealing The Soul of an Artist

One Drink Too Many: My Journey of Breaking Free from Alcohol
It Takes A Lot Of Faith To Be An Atheist
How Instagram Brought Back This Nostalgic Soup
What Makes Eli Run?
Comments
MOST POPULAR IN Spirituality
Our privacy policy