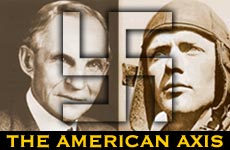 How Henry Ford and Charles Lindbergh contributed to the Nazi cause.

Book Review of:
THE AMERICAN AXIS - Henry Ford, Charles Lindbergh, and the Rise of the Third Reich - By Max Wallace (St. Martin's)

Max Wallace's ambitious joint biography of American icons Henry Ford and Charles Lindbergh retells some well-known stories and provides considerable new evidence of each man's deep anti-Semitism and disturbing relationships with the Third Reich. The book is based in part on new access to the Lindbergh family archives and the recent disclosure by the Ford Motor Co. of more than 90,000 pages of records concerning its Holocaust-era operations in Nazi Germany. Contrary to comfortable myths, Ford and Lindbergh were not "country club" anti-Semites who simply shared the prejudices of their time, Wallace writes in "The American Axis." They were the real thing.

Lindbergh rallied more support for Nazi Germany than any other individual in the English-speaking world.

Indeed, based on the evidence Wallace has marshaled, it is fair to say that Ford's factories and Ford himself contributed significantly to Germany's war effort, and that Lindbergh rallied more support for Nazi Germany than any other individual in the English-speaking world. Neither "caused" the Holocaust, yet both share responsibility for its devastation. That each did so while waving an American flag and preaching patriotism should give us all pause.

Wallace's text provides an interesting counterpoint to this year's public relations hoopla surrounding the centenary of the Ford Motor Co. That celebration soft-pedals or remains silent about Henry Ford's use of Ford dealerships to circulate "The International Jew," a vicious bit of conspiratorial hate literature published in pamphlet form. Many experts agree that this publication prompted more damage to innocent people than Adolf Hitler's turgid "Mein Kampf." True, as Wallace reports, Ford eventually apologized, sort of, for his activities as America's most influential anti-Semite. But Wallace also documents that Ford privately disavowed the substance of that apology shortly after it was released. Ford's editor on the pamphlet, William Cameron, remained on the payroll for years as director of public relations, according to company archives. Henry Ford's personal politics remained largely unchanged to his death in 1947.

Lindbergh believed that social progress could be achieved through birth control for poor people and forced sterilization for those he regarded as defective.

Wallace reports that aviator Charles Lindbergh's enthusiasm for Hitler's Germany emerged from his surprisingly deep contempt for democracy and his fascination with the "scientific" racial genetics of his era. Social progress could be achieved only through tight restrictions on immigration, Lindbergh believed, along with birth control for poor people and forced sterilization for those he regarded as defective.

Not least, Wallace documents some operations of a cabal of relatively influential, anti-Semitic and frequently pro-German U.S. intelligence agents between World Wars I and II. Drawing on Joseph Bendersky's 2000 study, "Jewish Threat," and on files recently released under the Freedom of Information Act, Wallace traces the clandestine support for the "Communism Is Jewish" propaganda of extremist anti-Communist emigres, as well as the highly questionable activities of Lindbergh's mentor Truman Smith, who served as the U.S. military attache in Berlin in the years running up to World War II.

Wallace has done his homework and generally remains evenhanded when evaluating his evidence. For example, he refrains from calling Lindbergh a "Nazi" as such (although President Franklin Roosevelt did use that term) and instead makes an effort to document the aviator's many contradictions.

But there are obvious questions that follow: What exactly does the epithet "Nazi" mean, and to what extent should fellow travelers such as Ford and Lindbergh be held responsible for the crimes of Hitler's regime? Such questions become particularly contentious when major business interests were involved (as in Ford's case) or when a hero promoted a form of supposed "Americanism" that is still widely embraced in the United States (as in Lindbergh's).

Wallace sidesteps direct answers, preferring to lay out his evidence and let the reader judge. Put briefly, Ford's most direct, documented role in Nazi Germany was his substantial investment in German automaking during the first decade of Hitler's rule. That in turn laid a foundation for Ford Motor's profiteering from slave labor during the Holocaust as a device to maintain market share and political influence throughout Nazi-occupied Europe. (Corporate headquarters in Dearborn, Mich., today argues, in effect, that some other Ford Motor Co. was responsible for the slave labor. There are many reasons to doubt Ford's claim, as Wallace ably demonstrates.)

It is also clear that Ford's "International Jew" played a role in Hitler's evolution as an anti-Semite, in part because parts of the text were lifted and used nearly verbatim in "Mein Kampf." Wallace's evidence buttresses the widespread belief that Henry Ford helped support the early Nazi Party and American fascist organizations, though the documentation remains thin and details probably were never recorded in the first place.

Lindbergh, originally known as the first man to fly an airplane across the Atlantic Ocean, emerged in the 1930s as a world-famous and seemingly credible spokesman for a certain type of pro-Nazi apologia. Wallace demonstrates that Lindbergh regarded democracy as "degenerate," frequently praised the purportedly "proud and virile" characteristics of Hitler's regime and warned against resistance to what he viewed as Germany's unstoppable military force. The "Jewish media" were the source of hostile reports concerning Hitler's Germany, Lindbergh contended. (In reality, fewer than one percent of news organizations were owned by Jews, the American newspaper trade association reported at the time.) Lindbergh also played a remarkably important role in Britain's 1938 Munich Pact with Hitler, Wallace shows.

We can learn a great deal today from the United States' earlier fascinations with "corporatism," as fascism was once called. Max Wallace's "The American Axis" provides insightful lessons about how the twin spectacles of power and hate operated in a previous generation. Whether we'll learn quickly enough to survive the next century remains to be seen.

Christopher Simpson is the author of "Blowback" (winner of National Jewish Book Award for Holocaust studies), "The Splendid Blond Beast" (on economics of the Holocaust and international law), and "War Crimes of the Deutsche Bank and Dresdner Bank: The OMGUS Reports" (on the role of major German banks in the Holocaust).