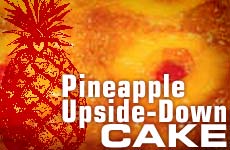 My Mom tells that me when she was growing up, each child had his or her own birthday cake. And that birthday cake was always, but always, Pineapple Upside-Down Cake. What could be more exotic, more American, less Greenhorn?

Imagine the bounty embodied in that jar of Maraschino cherries back in Poland. Cherries never looked so red, so well formed, so Technicolor -- and pitted, no less!

During the thirties, upside-down cakes were usually made with a yellow cake base. I have a Gold Medal Flour recipe right here that my Grandma no doubt knew about. It called for one egg. Such a simple cake wouldn't have had the merit to be the base of my Grandma's cake. Her cake had a sponge cake base. It called for nine eggs! There were six slices of real, canned pineapple on each cake, all the way from Hawaii, wherever that was. Grandma and Poppy had a grocery store during the Depression. It was a good thing, too. Where else would Jews living in Omaha come across pineapple? And then there were those cherries. A regular yellow cake wouldn't do. Not for precious, precious children like these.

The last thing my Grandma wrote out may have been the recipe for her Upside-Down Cake. My Mom asked her to write it down. For who? My Grandma always claimed that baking skipped a generation. "The Grandma bakes," she said, " so thenks God, the Mother doesn't hef to." Did Grandma write it for me? For the little one who potchkied with the strudel dough? Who couldn't stand still even to have the hem of her Bat Mitzvah dress pinned? Does Grandma understand how the squirrelly kid who became the cynical teenager will remember her memory by reading her recipes?

Now I bake all the time. This year, such a strange year, filled with so much loss and change here in the Goldineh Medina, called out for a really hopeful birthday cake for my Mom. I knew just what to bake.

I should warn you that this cake must be cooled before the kids come home because if they smell what you've been baking, some of the cherries may be missing by the time it comes to the table. My Mom says that was at least half the fun.


Pre-heat the oven to 350 degrees. Spray two 9" round cake pans with cooking spray. Sprinkle half of the brown sugar evenly in each pan. Place 3 tablespoons of margarine into each pan and place the pans into the pre-heated oven for about 5 minutes or until the margarine begins to bubble. Remove the pans from the oven and make sure the brown sugar mixture is evenly distributed. Place a single pineapple ring in the center of each pan with five additional rings around the center ring. Place a cherry in the center of each ring.

For the batter of the cakes, in the bowl of the electric mixer, combine the remaining margarine, sugar, eggs, baking powder and salt. Mix until uniform. Add remaining ingredients and mix until just combined. Scrape down the bowl. Mix at medium speed for 3 minutes. Pour the batter into each pan, starting from the edge of the pan and going toward the center, covering all the fruit. Place the pans into the oven and bake 45-55 minutes or until a toothpick stuck into the middle of each cake comes out clean. Remove the cakes from the oven and allow to cool until the pan is just cool enough to handle. Loosen the edges of the cake with a thin spatula or knife and invert each cake onto its serving plate. Leave the cake pan in place for a couple of minutes to allow the remaining fruit and syrup to drip down onto the cake.

Passover and the Healthy Jewish Kitchen

Passover Desserts You Can’t Pass Over

Tu B’Shvat: Cooking with the 7 Species

Chanukah: A New Spin on Traditional Recipes
It Takes A Lot Of Faith To Be An Atheist
How Instagram Brought Back This Nostalgic Soup
What Makes Eli Run?
Comments