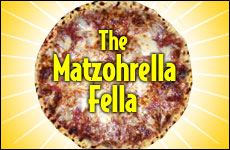 My dad could put a twist on just about every Jewish food. It was great for his soul, but not for his heart.

He would have been 85 this month. He died a dozen years ago at 73. Amazing he lived that long, the way he ate. One whole branch of the family wiped out by heart disease. No wonder our people suffered so much. It was the cholesterol.

The man could create. The man could concoct. We never met a vegetable he couldn't render unrecognizable. A big salad marinated to a wilted lump; a carrot pickled to oblivion. I never knew what food was meant to taste like till I went to college. But it didn't matter. He was our hero. He was a true American pioneer – the Daniel Boone of fried food. Flavor meant far more than nutrition. Abundance meant more than common sense. He had been raised in a deli during the Depression when rugelach meant wealth and kreplach rekindled memories of the old country. He loved to eat till it hurt. Hearing him complain of heartburn hurt us all with him. But he was proud he had enough food to eat to get the heartburn.

He was raised in the Depression when rugelach meant wealth and kreplach rekindled memories of the old country.

Dad's family deli sat compatibly in an Italian Jewish neighborhood with a melting pot of international eateries springing up all around it in New Haven, CT. Pooling our national treasures was our big weekend entertainment. My sister and I were the garlic girls— -- dicing and chopping for hours on end. Our hands stunk so much even the fishermen's daughters stayed far away.

In his creative culinary zeal, My dad invented "matzohrella marinara" and we were his accomplices: putting layers of mozzarella cheese over pieces of garlicky marinara-laden matzoh with a bissel of sauce just for taste. And we made the "matzohpizza": you guessed it, with all sorts of toppings. And the neighbors would come over with their side dishes and we would exclaim and celebrate the novel tastes and feast till we groaned.

He was a true "Jewmanist," often misquoting the Edwin Markham's poem: "They drew a circle that shut me out,
Heretic, rebel, a thing to flout. But food and I had the wit to win. I drew a circle that took them in." He was proud of his heritage and joyful about learning everyone else's, too.

My grandfather, dead at 55, had bequeathed Dad his inventiveness. Grandpa invented the vertical Venetian blind and what was later knocked off to become the Lazy Susan —-- an electrically spun shelf for his deli case window.
He made some for the Chinese restaurant next door. Dad made them blintzes stuffed with Chinese food and they gave him fortune cookies stuffed with Yiddish expressions (which looked a lot like Chinese) only my gGrandmother could read. Our hood was the United Nations of junk food.

Dad invented the two aquarium fish tank filter and French toasted, egg soaked and fried grilled cheese sandwiches with maple syrup doused on top, and liverwurst fried and rolled like sausage around a slice of kosher pickle, held with a toothpick. It was the only way I would eat it.

He had a way with toothpicks. When, in his fourth decade, he had his first of many heart attacks and had to give up smoking cold turkey (if only he had eaten cold turkey), his oral fixation began to center on toothpicks. He always had one in his mouth, and became very adept at spearing the sugarless gums and candies omnipresent in his mouth. Before he kissed my cheek goodnight, he would shish kebob the jelly bean and the gum very articulately onto the toothpick and present it proudly. If only he could have gotten on Ed Sullivan with that trick, his life would have been complete.

Dad loved to picnic on his gravesite. "Hey! It's a lovely little piece of property— -- why wait till I'm dead to enjoy it?"

The location was under a young tree that grew old with him. He seemed at peace with the idea of death way too young. His family was dropping like flies. Their section of the Jewish cemetery was so crowded you had to audition to get in. And when he passed, the nursing home was just a headstone’'s throw away from his promised land.

He was a kosher salt of the earth kind of guy. He was a wonderful, unusual, lovable, original character. Happy Birthday, Dad.