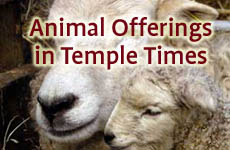 Understanding the phenomenon in the 21st century.

Many people find the whole notion of animal offerings to be pagan and primitive. It sounds quite different from the warm, spiritual religion we imagine our ancestors practicing.

The question becomes increasingly difficult in light of the special care and concern that Judaism shows toward animals. For example, according to the Code of Jewish Law, it is forbidden for to sit down to dinner before feeding your pets! In numerous other places, Jewish law allows leniency's in order to avoid causing physical or mental anguish to animals. So how do we reconcile the idea of animal offerings?

Many people voice the objection of "How can you kill an animal?"

But in actuality, modern man does it all the time! We eat hamburgers and wear leather shoes. So if we can use animal products for physicality, why not for spirituality!?

Perhaps the underlying issue is related less to the actual activity of offerings, and more to the perceived reason behind it. We think, "What kind of a G-d needs offerings? Is it some kind of bribe to get Him to stop being angry with us?"

The answer is that offerings are not for G-d. He doesn't need it. They're for us, to teach us to take the physical - the body - and lift it up toward G-d.

Every human being is comprised of two components - the physical body and the spiritual soul. Each wants to be nourished and sustained, yet each achieves this in very different ways. The body seeks comfort and immediate gratification: food, sleep, power, wealth. The soul seeks longer-lasting, eternal pleasures: meaning, love, helping others, connection to G-d.

The mitzvahs of the Torah are designed to guide us toward "soul pleasures." However, when the body takes over and exerts dominance, we transgress these mitzvahs.

The way to repair that mistake is for the transgressor to bring an offering. He steps forward and declares: "I have made a mistake and regret the distance it has put between me and my Creator. It is my animal side which got the best of me. I will try not to repeat that mistake again. I hereby pledge to control the force of animalism within me."

Why all the blood and guts? The animal represents you. We see the animal slaughtered before our eyes and we think, "Really I deserve this, but G-d is merciful and sparing." That's a powerful spiritual experience. Blood is real. It shakes people. When it comes to concretizing a commitment, actions have far greater impact than words.

But we don't merely slaughter the animal. We elevate parts of the animal onto G-d's altar. This is a personal declaration of our intention to elevate our OWN animal self to a higher level - to harness that energy and direct it toward service of G-d. And then, we eat part of the animal. We ingest the idea and make it part of ourselves.

From here we can understand the meaning of the Hebrew word for animal offering, "Korbon." A korbon is not a sacrifice - as in, giving something up. Nor is it an offering - as in, bringing a gift or bribe to the gods. Rather, the translation of korbon is "to become close." That is what the Jew achieves when bringing a korbon to the Temple.

There is a universal tradition for animal offerings. Adam did it, Noah did it, Abraham did it, Moses did it, King David did it. It's just that Western society doesn't do it anymore. Maybe that's one reason for today's spiritual crisis.

Today, with the Holy Temple in ruins, we do not have the opportunity to bring a korbon. What do we do instead? Prayer is a primary way to approach G-d and become closer. And we can pre-empt future "mistakes" by putting our souls in control and dedicating ourselves to observance of the mitzvahs.

Why Do We Still Mourn
Is Grease the Word?
Dried Fruit Compote
Scientific Curiosity and the Divine Encounter
Comments
MOST POPULAR IN Tisha BAv
Our privacy policy
Aish.com Is Looking for Great Writers