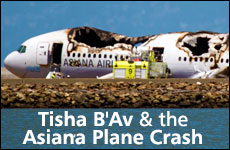 Sometimes we are blinded by the light.

According to Federal crash investigators, the pilot of Asiana Airlines Flight 214 said he was blinded by a bright light when the plane was 500 feet above ground. The plane crash last Saturday left two young girls dead and 168 others injured. The pilot, a trainee attempting this particular landing for the first time, said that the light was so bright that he could not tell the difference between the water and the land.

It reminded me of a museum that I went to with my children. We were walking through a dark tunnel in the museum and my son pulled a keychain flashlight out of his pocket. He walked ahead, excited to illuminate the path for everyone behind him. But then we entered another room that displayed optical illusions. The light was super bright, but we kept getting lost. The floor looked like the ceiling, and the ceiling looked like the floor. The maze of mirrors confused us to the point where we could not distinguish between our reflections and ourselves.

“This room is much scarier than the dark," my son said. "There all we had to do was turn on my flashlight, but here you can’t even see my light. There are too many tricks.”

We are mixing up the water with land, the ceiling with the floor, our reflections with ourselves.

As Tisha B'Av approaches I think about this. Why did the destruction specifically take place during the summer when the sunny days are long and most of us are busy planning vacations? Why not in the winter when sadness seems more natural and darkness is mirrored in the season itself? What happened in the Asiana plane crash and in that room of optical illusions teaches us a crucial lesson about light: when we’re not careful the brightness can blind us. Sometimes it looks like we are connected and in control while in reality, we are mixing up the water with land, the ceiling with the floor, our reflections with ourselves.

In Lamentations, God asks the Jewish nation and each of us: Where are you? Can you see where you’re going? Is it real?

Rabbi Zev Leff recounted the following story that happened to the Klausenburger Rebbe in a concentration camp. The Rebbe was speaking to a fellow inmate man who had been the head of the National Bank of Hungary. He even had his face printed on some of the bills, and he had converted to Christianity many years before. The man had married a Christian woman and they had a few children together who all held prominent positions in Hungarian society. As they were talking, the man told the Rebbe that he and his wife had been married for 30 years.

“Did you have a happy marriage?” the Rebbe asked him.

“Yes, we were very happy. I took care of her every need, and we had a beautiful life together.”

“Where is she now? After all those years, she leaves you to go through this alone?” the Rebbe asked him.

The man became furious. “It’s bad enough I’m here at all. Why are you pouring salt on my wounds?”

“Of course I was a good father. I gave them everything I had,” the former bank president replied.

“And they don’t even visit you or try to get you out of here? After all of those years. And you were the head of the Bank of Hungary. You pulled your country out of a depression. You served faithfully for years, and they leave you here? Me? I’m just a poor Rabbi. I don’t expect anyone to come and save me. But you? What have you gotten in return for everything that you gave?”

The man was silent and turned away. But the next night, he came to the Rebbe and began to cry. “You are right. I see now that everything that I thought was true and real was not. It was a mistake. My life was a mistake.”

Soon after, the man was murdered by the Nazis, but he had that moment of truth before he died. He couldn’t see it when his life was under the bright lights of the Hungarian bank, but he saw the truth for what it was in the darkness of the concentration camp. And he was finally able to know what he lost and cry for it.

To be able to cry is a gift. To recognize what we have lost is a gift. A professor in my Family Therapy program told us to close our eyes and remember in detail our childhood homes. Each room, the expressions on our siblings’ faces, the faces of our parents.

I think about that student every Tisha B'Av because most of us cannot cry over the Beit Hamikdash, the Temple in Jerusalem that we never knew. We do not remember what we have lost. The distraction and the bright light of our lives often confuse us.

But we have our tears, and that is how we can begin to find our way past the illusions of the light.

Why Dip into Honey?

Is Hanukkah Overrated?: This Video Will Make Your Holiday More Meaningful
Blessing on Chewing Gum
Was Rahab a Prostitute?
Extras In Our Own Epic
Comments
MOST POPULAR IN Current Issues
Our privacy policy