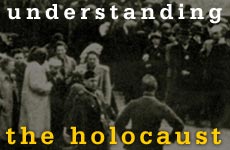 In approaching this most difficult of issues, we confront the very foundations of our lives.

A central pillar of Jewish belief is that nothing happens in a vacuum. History has meaning, oppression has meaning, suffering has meaning. We are a people whose essence is meaning. It’s the lifeblood of who we are and what we stand for as a nation.

If this is true – and the Jewish people have fought to preserve this truth for 3,500 years – then the Holocaust must have meaning as well. Beneath the suffering and pain of the Holocaust lie the seeds of understanding our mission as Jews even today.

This is not to suggest that any one explanation will ever fully help us to come to terms with the persecution and murder of millions of innocent people.

Still, it does mean that we must try to contend with the Holocaust on a number of levels. For with every victim an entire world was lost; (1) with every survivor, a new lesson must be learned. In this light, the meaning of the Holocaust is as varied as the human heart itself.

"You shall be to Me a kingdom of priests and a holy nation." (2) These are the words that describe the Jewish people’s covenant with God. We have been chosen to be a light unto the nations,(3) an eternal people bearing a message of God’s morality: "Love your neighbor as yourself" (4)… "Justice, justice shall you pursue(5)…" "Do not afflict the widow and the orphan(6)…" "Nation shall not lift up sword against nation, neither shall they learn war anymore(7)…"

It means honoring our Creator in the way we conduct ourselves in public as well as in the privacy of our home. In the way we raise our children and take care of our old. In the laws we live by and the values we are trying to impart to the people – and nations – around us.

A World Against Us

Anti-Semitism was born with the birth of the Jewish people. After all, it can be exceedingly irritating to be faced with the voice of human conscience when you yourself have other plans and desires. It is one of the not-so-subtle ironies of the Hebrew language that the word Sinai is closely linked to the word for "hatred" – "sina".

One of the high points of the Passover seder joyfully testifies to this phenomenon of history. With a glass of wine raised high, we declare that in every generation the nations of the world will rise up against us, to try to wipe us out and destroy the message we bear – but to no avail. The Jewish people is eternal, and our message is eternal.(8)

When the Jewish people lives up to its potential as a light unto the nations, the moral fabric of the entire world is improved.(9) The nations of the world will see the beauty of Jewish values and will praise us and want to emulate our ways. (10)

At such times, anti-Semitism may still rear its ugly head, but no power in the world will be able to harm us. And the Almighty Himself will turn over heaven and earth to attest to the fact of this awesome truth.

But if that light is lacking, then the moral fabric of the world quickly sinks into decay. And then it is only a matter of time before the Jews are seen as little more than an irritating reminder of an old-fashioned, restrictive morality, an enemy of the "new world order" that wants nothing to do with the Chosen People and their God.

Such times are times of national tragedy indeed. In place of the miraculous protection that once graced our people, we are left vulnerable to the cruelest whims of humanity. Hunted down, persecuted, put to death in the millions simply because we are Jews.

Such times are times of great suffering, but not of suffering in vain. The nature of our covenant means that even when we are subjected to the unimaginable cruelty of a Holocaust, the message remains the same: There must be a better way. Mankind must be taught to rise above his baser instincts. In that way, the suffering itself becomes the source of the Jewish message to the world.

The Lessons of the Holocaust

Where was God during the Holocaust? As a people, we declare that God was right there – pleading with us to pay attention, never letting us forget how much work remains to be done in this world.