My Mother the Judge 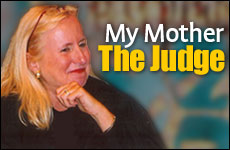 Watching Judge Lefkowitz balance the needs of four generations and a seat on the New York State Supreme Court was impressive, especially to her daughter.

It was 6 AM on a Friday morning at the beginning of a bitterly cold March in New York. Inside the home of New York State Supreme Court Judge Joan Lefkowitz a chicken was roasting in the oven.

I was sitting at my mother's kitchen table with my husband, three small children and grandparents, while my mother, the judge, was busy preparing for Shabbat. My grandmother was dying, and we had come in from Israel to spend time with her.

After my grandmother was diagnosed my mother moved her parents in with her to take care of them when she wasn't at court. My aunt came to sit with my grandmother during the day. Every Shabbat my mother had my aunt and her family over so that everyone could be together. This went on for nine months.

It was right before Passover and the house was filled to capacity. There was a crib and a hospital bed. There were diapers and oxygen machines. There were toys everywhere and a fridge filled to capacity with baby yogurts, special weight gain shakes for Grandma, kugels and meats for Shabbat. The scene would be enough to panic any homemaker, but the dining room table was already set for our Friday night meal as the rising sun glinted off of the crystal glasses. Later, dressed in her suit for work and making sure that my grandfather could find all of his pills, my mom calmly searched for her keys.

You can imagine what it was like preparing for Passover that year. My mom's calendar was filled with cases including one huge case that month involving millions of dollars and at least twenty lawyers. On top of everything else it was the election year for my Mom's term to be renewed. There were boxes full of palm cards and various people from the campaign team running in and out of the house.

I remember when my mother first became a judge, how we all campaigned together. My brother, my grandparents and I all had campaign buttons and t-shirts. We used to go to a lot of the events together. I remember the weekday mornings when the campaign crew would gather in our kitchen at 6 AM for some coffee before heading to the train stations to catch the morning commuters.

My mother was holding the baby in one hand and the Seder plate in the other. She offered the journalist macaroons and coffee.

That year, the day preceding the first Passover Seder, a newspaper reporter came to the house to interview my mom. He found my husband pouring boiling hot water over the kitchen table (to make it kosher for Passover use) and mopping it up with towels. My mother was holding the baby in one hand and the seder plate in the other. She offered the journalist macaroons and coffee.

It was noon on arguably the busiest day of the Jewish year and my mom answered every question with a smile. "Do you know what I love to do the most in the world?" my mom told the interviewer. "I love to be with them," she gestured to her granddaughters who thought the flashing cameras were a wonderful game as they posed with their arms around each other amidst a pile of toys. "There is nothing better than this," my mom exclaimed as she fixed the baby's ponytail. Then the phone rang. It was her law secretary calling to ask her about a case.

The Seder that year was beautiful. In the back of our minds, we all knew, somehow, that it would be my grandmother's last Seder, but still, she enjoyed her great grandchildren. As my children asked the Four Questions, I thought about the Seders when I was a child. How I knew the whole haggadah and all the prayers, because my mother insisted, against all odds, on sending me to a Jewish Day school. How we would all take out the Passover dishes together. How the house would fill with guests, including my mother's grandparents and the entire extended family, year after year.

My mother had worked most of the day right up until Passover eve all those years. She would come through the front door at the last minute with her grandparents and a pile of Passover cakes. Somehow though, everything would always be ready on time, and the Seder table would stretch into the hallway with the county executive sitting at one end of the table with all the judges and lawyers who didn't have a Seder of their own.

As my children played in the living room during that last Seder, I watched the lights of the candles cast their glow upon the ceiling, and I thought about all the Shabbats my mother and I spent together. All the Friday night dinners my mother made before she left for work Friday morning; how she invited the judges, the lawyers, and the lonely widow next door. How we walked to synagogue together every Shabbat morning and read together on long Shabbat afternoons.

I remember the time I met my mom at court on a Friday afternoon after school. I stood at the back of the courtroom with my knapsack and watched her on the bench. There must have been eight lawyers there that particular day, and the hour was growing late. After a few minutes, I saw my mom check her watch and announce, "Ladies and Gentlemen, court is adjourned until Monday." One of the lawyers near me whispered to his colleague, "The Judge's Sabbath is starting soon."

It was during that bitterly sweet Passover that I saw the extent of my mother's strength, compassion and focus.

But it was really only during that bitterly sweet Passover that I saw the extent of my mother's strength, compassion and focus. Not once, during that incredibly stressful time, did she complain. Between the election and a home filled with four generations of people, my mom presided with endless patience and warmth.

Sometimes during that long month my mom would bring one of her granddaughters to court with her. One day my daughter sat on the bench with her coloring book as the lawyers argued. During the break she whispered to my mother, "Grandma, why do these people talk so much?" Adina, my daughter, was especially fascinated by the emergency button on my mother's bench. "It's for safety," my mom explained, and I remembered how one year a crazy man had started sending my mother death threats and how she could not even walk to her car without a court officer.

At the end of that Passover we left with heavy hearts. But since then my mother comes to Israel for Passover and for any other vacation that she has. She goes on missions to speak to the soldiers in Ramallah. She hosts receptions for anti-terrorist organizations and other important causes in Israel. In the middle of the intifada, she insisted on walking down Ben Yehuda because she was worried that the shops weren't getting enough business.

When she arrives, she puts on her sneakers and her baseball hat and she tells my children, "There I'm the Judge; here I'm just a Grandma." And you can find her at 5 AM in my home, making omelets, giving her new baby grandson his bottle and handing out all the special projects she brought from New York for my girls.

At the Kotel, which is always the first stop after Grandma's arrival, she pulls out all the notes that her friends and colleagues sent with her, and we help her stuff them into the crevices of the Wall.

And as we stand at the Kotel this year, praying beside each other, I think how blessed I am to be my mother's daughter.

This article is dedicated to my mother, Judge Joan B. Lefkowitz, may she live and be well. May God protect her and bless her with health and happiness. Thank you, Mom, for the Torah education you gave me, for the Shabbats and holidays of my childhood, for being such a dedicated grandmother and for being one of my closest friends.

Why I Run
Is Grease the Word?
Dried Fruit Compote
Scientific Curiosity and the Divine Encounter
Comments
MOST POPULAR IN Family
Our privacy policy
Aish.com Is Looking for Great Writers