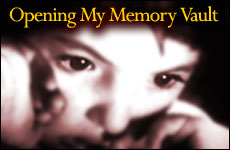 For 50 years, Leah Kaufman's war experiences were locked in the vault of her memory, until she forced herself to teach the Holocaust to her fourth grade class.

An excerpt from "Live! Remember! Tell The World! The Story of A Hidden Child Survivor of Transnistria," as told by Leah Kaufman, written by Sheina Medwed (Mesorah/Artscroll, 2005).

After having lost her entire family on The Death March to Transnistria, nine-year-old Romanian-born Leah Kaufman survived the war years with her ancestral faith, her Jewish identity, and her belief in human goodness intact. Brought to Canada by the Canadian Jewish Congress at the age of 16, Leah entered the Hebrew Yiddish Teachers Academy and became a devoted teacher. For the next 50 years, her war experiences were locked in the vault of her memory. This excerpt describes how Leah forced herself to teach the Holocaust to her fourth grade class without anyone ever knowing her secret identity.

The greatest challenge I was confronted with during this time came when my school introduced the Holocaust into the curriculum. I knew I couldn't refuse to teach it. I was forced to confront the subject, to participate in the memorial assemblies, and to answer the questions posed by my students.

Teaching the Holocaust at first was overpowering. I simply broke down the first few times I tried to prepare the curriculum. Slowly, I trained myself to teach this subject by distancing myself from it as if I wasn't who I was -- a survivor. It was extremely difficult to do; nonetheless, keeping my identity hidden was a good thing in retrospect. Otherwise instead of doing justice to the victims, I could have become the focus, either as a "hero" or a "victim," without doing justice to the many children and their agony.

"Fifteen thousand children under the age of 15 were killed in the concentration camp called Theresienstadt. Only 100 survived. Each one was an entire world."

I used children's words to reach my fourth grade class. I taught them using the book of children's drawings and poems, I Never Saw Another Butterfly. I told them, "These children were Jewish children living in many places in Europe, including Vienna, Prague, and Berlin. They had homes, parents, brothers and sisters, grandmothers and grandfathers, just like you. Suddenly, overnight, their world was destroyed. They were driven away from their homes, their belongings were taken away, and they were starved. Many died from sicknesses. Fifteen thousand children under the age of 15 were killed in the concentration camp called Theresienstadt. Only 100 survived. Each one was an entire world."

Occasionally one of my students would ask, "Morah Leah, did you ever know any of these children who survived?"

I would always answer them, "No." I encouraged my students to share this part of our painful history with their parents and grandparents. Some of them had family members who were survivors, and the exposure in my class opened up a dialogue between them.

One year, the day after I had finished teaching, one of my students came up to my desk. Jeanette had a green ribbon in her blonde hair, and she held her pencil tightly with her fingertips at both ends. "Morah Leah, I told my mother about the children."

I waited, as I sensed that she had more to tell me.

"My Bubbie and my mother were in a place like that. And then the Americans came. My mother was a very little girl, she was three years old, and she told me that she used to watch the cats go in and out through the fence. Every day she would tell my Bubbie, 'I wish I could be a cat because then I could go out, too.' My Bubbie told me that when the war was over, she went back to her house. It was empty except for her Shabbos candlesticks. She said the Germans didn't take them because they weren't silver or gold. They were pewter. She lights them now every Friday night."

Before I could respond, Jeanette ran back to her desk and returned with a drawing she had made. On the left side of the page, there was a little girl in a red dress, behind a black fence. The orange spotted cat sat beyond the fence towards the right. A brown train was surrounded by clouds of black-gray smoke. Jeanette had used a pen to draw circles for faces in the train cars. At the very edge of the page were a rainbow, yellow balloons and green grass.

"Did you show this picture to your Mommy?" I asked her gently.

"Yes," She nodded. "My mommy said that the rainbow and the balloons are our family."

I looked at my blonde-haired, blue-eyed student and was grateful that her place in the picture was on the rainbow side of the page. I was her age when, overnight, my childhood was destroyed. As I patted her on her head, I remembered the feeling of my own hair being woven into braids. My mother would finish with a pat and a kiss on my head.

"I see that you learned a lot from our class. I'm proud of you that you shared this with your Bubbie and your mother. Now you have something to tell your own children when you grow up."

Although I had finished "teaching" the Holocaust, Jeanette's drawing was up on the wall of our classroom for the rest of the year.

When I conducted the memorial candle lighting ceremony, I tried to read my students' faces and to use the opportunity as a lesson in faith. As I held the first candle in my hand, I said, "Even though our people have passed through horrible times, baruch Hashem, we are here to continue our traditions and to remember those who died. The flame is to remember their souls, because the soul is compared to a light. But it also has to be a flame of life for us, so that we always remember to be proud Jews and to live Jewish lives. "

Who Will Save the Baby?
Should I Break Up, Get Engaged or Keep Dating?
Time Is Your Precious Commodity
A Constant World in Flux
Comments
MOST POPULAR IN Holocaust Studies
Our privacy policy