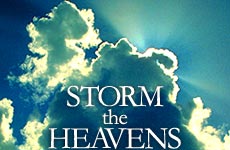 A special call to unite in prayer during these dangerous times.

Whatever your plans may be for the afternoon of Thursday, February 20,
please set aside some time to help protect the Jewish people and the
civilized world.

The effort, which is expected to involve tens of thousands of determined
Jews, entails no expenditure of funds or physical effort, only of heart.

A group of esteemed rabbinical figures in the Orthodox world, the Council of
Torah Sages, has asked the entire Jewish community to unite in prayer that
afternoon, in light of the world situation in general and, in particular,
the specific threat to Jews, here in the United States, in Europe and in
Israel.

The heartfelt prayer of every single Jew is invaluable.

What the highest rabbinic body of Agudath Israel of America has asked is that Jews gather in their synagogues - or simply take the opportunity at home or work -- to pray Mincha, the traditional afternoon service -- and then to recite several Psalms (the
request specifies chapters, 13, 43, 44, 79, 80, 83, 102, 121,130 and 142)
and the special "V'hu rachum" -- "He, the Merciful One" prayer traditionally
recited on Monday and Thursday mornings, in a heartfelt manner. Jews who
are unable to pray in Hebrew should pray in whatever language they speak.
Those who are able, they suggested further, should fast from the morning
until approximately 1:00 P.M. (the "Mincha Gedola" time, the earliest time
for the Mincha service, which varies somewhat in different cities).

The rabbis' request begins with words from Maimonides, stressing the
importance of crying out to God at times of danger. To do less, the great
Jewish thinker explains, is "cruel-hearted," because prayer evidences our
belief that God rules the world, and so refraining from prayer implies the
opposite. And, as God tells us in His Torah: "If you walk with Me with
indifference [the attitude that all is happenstance, the commentaries
explain] -- then I will walk with you in the same manner [leaving your
plight as if to happenstance] (Leviticus, 26)."

Thus, the Council beseeches us: "At this hour, with the danger of war
hovering over us, and powerful evildoers threatening the remnant of the
Jewish People in Eretz Yisroel and in the Diaspora, and the entire civilized
world, how can we not tremble and our hearts not melt? How can we not raise
our prayers in supplication to our Father in Heaven?"

There are precious few opportunities with the potential to unite Jews of
different walks of life, political beliefs and congregational affiliations.
But prayer -- for ourselves, for our fellow Jews and for the world -- is
certainly one of them.

According to our religious tradition, the time of the Mincha prayer -- the
afternoon -- is a special one, particularly auspicious for effective
intercession with the Almighty. Let us all, wherever and whoever we are,
storm the heavens on February 20.

And may we successfully merit God's compassion and forgiveness.

You can download most of the Psalms in English and Hebrew at
http://www.artscroll.com/itehillim.html

Is Cognitive Behavioral Therapy Like Prayer?
Why Are The Prayers Of Yom Kipur So Repetetive?
Ha'azinu 5783: A Time for Unity!
Twisted Thinking
Comments