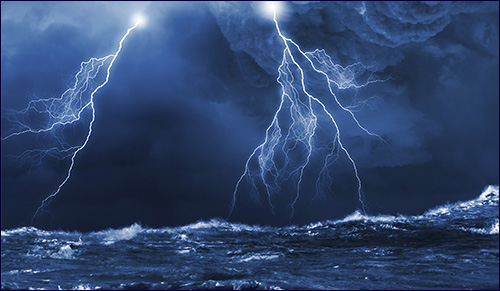 The storm came and suddenly I was being hit with six-foot waves, zero visibility and a sinking kayak.

On Tuesday, July 8, 2014, I decided to join eight other kayakers to practice safety skills and enjoy the serene waters of the Chesapeake Bay in Essex, MD. I was originally planning on staying home to relax because my stress level from work and life were through the roof and I did not have the energy or motivation to go anywhere. Nonetheless, I decided at the last minute to join them, knowing that the waters of the Chesapeake Bay would probably rejuvenate me.

Understanding that a possible storm could be developing, we stayed pretty close to the location we started from, so we could get back quickly if we saw the storm coming. On the Chesapeake Bay, you can always see a storm coming because the visibility on the open water is typically great.

My wife called me late afternoon to tell me that dark gray clouds and fierce winds suddenly overtook Pikesville and she was concerned about the weather conditions in Essex. Essex is 25 miles from Pikesville and the weather there was beautiful, no clouds in sight. 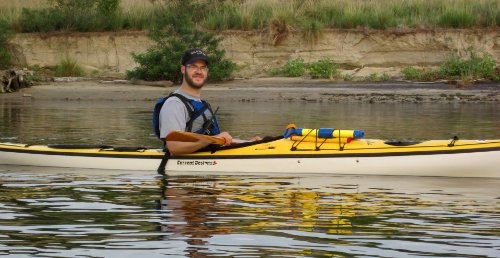 Fifteen minutes later, we saw the clouds approaching from a distance and the wind picked up a bit. We decided to go back immediately to avoid being on the water during the storm. We were only a 5-minute paddle away from our put-in location, which is generally protected from waves and rough conditions even when it's windy.

Three minutes away from shore, the wind picked up dramatically and we were hit with 2-foot waves that were abnormally close together. The waves were slamming against our boats, but we were still able to continue our course albeit at a slower pace. The storm traveled 25 miles in approximately 20-25 minutes. You do the math...that means the storm was traveling at about 60 miles/hour.

One of the paddlers near me had a difficult time navigating the waves and wind. His boat was being pushed out towards the open waters where conditions would have been less favorable. I was not successful in coaching him to reposition his boat with his paddle, so I followed along, attempting to physically turn his boat tip towards the waves to get him back to shore. I was not scared but I was starting to feel stuck, not sure what to do to help the other kayaker. Then the storm hit.

A 6-foot wave smacked me in the face and ripped me right out of my kayak.

The winds picked up and made it difficult to even keep our paddles from blowing away. The waves were now 4-5 feet tall and every one of them was white capped. Heavy rain and hail started pouring down and I could not see anything. I could not see the other kayaker, Hart Miller Island or the land we launched from. It was too loud to hear anything, so even if someone was screaming, I would not have been able to hear it. Now I was scared.

A 6-foot wave smacked me in the face and ripped me right out of my kayak. Monster waves were coming at me from all directions. Holding onto my kayak and my paddle for dear life, doing my best to make sure the kayak did not bang into my head and knock me out, I had to figure out how in the world I was going to get back into my kayak. I took the on-water safety courses, but it's quite different when you actually need to use the skills. Lightning lit up the skies, making me even concerned about my predicament. Talking to God was never so real.

I had an epiphany. Although I had to use the skills I learned to get me back safely, my outcome was not in my control. In fact, our health, safety and success are never in our control. Our role is to put in the appropriate effort; God is responsible for the outcome. That's what I was thinking about as I was being thrown around in the water outside of my kayak in the middle of the Chesapeake Bay. A sudden sense of calm overtook me and I no longer felt any fear. I knew with certainty that my fate was not up to me.

Then my first miracle occurred: I got back into my kayak! With nothing to step on and huge waves whipping me around from all directions, I used the paddle float, an inflatable balloon device that fits over the blade of the paddle, to leverage the kayak while attempting to climb in and not roll over the other way. Every time I practiced this skill, I was on flat calm water with all the time in the world. This was a bit more challenging, but I put in the effort and succeeded.

I could no longer help the other kayaker because I could not see or hear him. So I turned my kayak around and started back to shore. I judged the direction based on the general path of the waves and the wind. I used my marine radio to call for help. I managed to speak with someone from the coast guard and gave him a general idea of where we were located. I had no clue where the other kayakers were. I just hoped that they were not at the bottom of the bay.

After paddling for 10 minutes, I saw the land ahead of me. I was having a very difficult time moving forward because the water was filling up my kayak with every wave that crashed over my boat and into my face. My hand pump is not easy to use in any condition, let alone my current situation, so I put the paddle float between my legs to displace some of the water and give me a little buoyancy.

My entire kayak, from front to back, was about an inch under water.

The coast guard sent out nine rescue boats and a helicopter. I kept pushing forward slowly. Paddling a boat filled with water is like trying to move it with an anchor in the ground. Then the storm calmed down and they found me. By that time, my entire kayak, from front to back, was about an inch under water. I got in the coast guard's boat (along with my kayak) and we traveled around to look for the others. Everyone else managed to get to shore, some on Hart Miller Island, one at Island View and some on Hawk Cove. I was the only one who was in the water for the duration of the storm. In the end, thank God everyone was found and brought back to the shore safely and unharmed, although a little traumatized.

I am grateful to God for giving me the opportunity to spend this special time with Him and for helping me realize my role and that with the right perspective, there really is no place for stress or fear.

Rabbi Chaim Amster is Director of Development for Bnos Yisroel School for Girls in Baltimore, MD. He is a member of the Board of Directors of the Children's Scholarship Fund Baltimore and an active lay-leader for the Associated: Jewish Community Federation of Baltimore. Rabbi Amster's advice is sought by numerous organizations to provide direction and improve their ability to raise funds and operate in a fiscally responsible manner. He is also a former board member for the Darrell Friedman Institute for leadership development and a past participant in the Baltimore Jewish Council's Leadership Development Program and the Associated’s Young Leadership Council.

A Leg to Stand On

Surviving My Near Fatal Marriage
Jews and the Chocolate Trade
Cats: 8 Jewish Facts
Every Night, Forgive Yourself and Others
Comments
MOST POPULAR IN Spirituality
Our privacy policy
Aish.com Is Looking for Great Writers