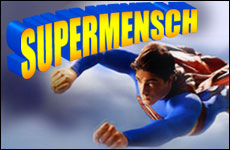 The Man of Steel has always been Jewish, and in his newest film, Superman returns to his roots

Way back in the 1930s, teen science fiction buffs Jerry Siegel and Joe Shuster became known for creating a legend.

You may have heard this story:

It took place in their 25th century. Faced with a world-shaking catastrophe, a parent placed a baby boy in a small craft, hoping he'll be propelled to somewhere safe. The boy was found and adopted and grew up incognito, eventually revealed in adulthood as a world-saving hero. But he still had his alien heritage to explore.

2448 was the Jewish year. The small craft was a basket, and the baby was Moses who was found, adopted and grew up incognito, eventually revealed in adulthood as a saving hero. His alien heritage: the Jewish upbringing that was denied to him.

While Siegel and Shuster were -- by any measure -- original thinkers, their origin of the last son of Krypton was a science fiction retelling of the rescue of Moses from Pharaoh's infanticide.

Like Moses' mother Yocheved before him, Superman's father, Jor-El, saved his baby son from doom by placing him in a small conveyance (a mini-spaceship) and sending him off to be adopted, to be raised with an assumed identity and become a hero known the world
over.

In the blockbuster Superman Returns, he really returns. The Man of Tomorrow has a burning need to know about his 'yesterday.' He needs to go back to the place his parents were born to explore who he really is. He needs to know about the destruction that was visited upon his homeland and ancestors.

The Man of Tomorrow has a burning need to know about his 'yesterday.'

His search for self -- like a young Jew who goes off to learn about Israel and his Jewish identity -- is a necessary journey that becomes transformative in its affirmation of who he truly is. While Superman Returns tells us little about what he actually saw in the five years he was away (the film begins with his return), it is made clear that it
was something of such deep significance to him that he felt the need to leave his widowed mother, his newspaper job as Clark Kent, his friends, his entire life, including Lois Lane.

While he's gone, the machinations of Lex Luthor have manifested themselves in an ironic evil. Superman's absence enables Luthor's escape from multiple life sentences in prison and allows the criminal to invade Superman's private haven to hijack stolen Kryptonian technology for his own destructive purposes.

Superman knows better than anyone about the urgency of being vigilant before evil; but his personal discovery -- knowing who he is and where he comes from -- is what enables him to face evil head on and defeat it.

Superman is Kal-El of the family that had been known on Krypton as "The House of El," in Hebrew Beit El, which means "The House of God." Over the nearly seven decades since Superman first appeared, there have been numerous Jewish connections from Jewish creators Siegel and Shuster to Jewish director of Superman Returns, Bryan Singer.

The story has been told that 16-year-olds Jerry Siegel and Joe Shuster didn't work on their comic strip on Thursday nights. They had nothing to draw on. Mama Shuster needed her challah board.

In addition to the Moses connection, Superman also had a firm basis in the story of Samson. Despite his present panoply of abilities, his original powers were
much more focused on heroism through tremendous strength alone. Long before there was x-ray vision, super-breath, or even flying, the best Superman could do when Superman was first created was jump an eighth of a mile or, as they used to put it, "leap over tall buildings in a single bound." As the stories grew over the years, so did Superman's powers, but his first encounters with criminals -- and with Nazis -- in the 30s and 40s had him behaving more like Samson than the Superman we know today. Mostly land bound, he lifted cars and tanks and shook out the bad guys. Bullets couldn't hurt him, but exploding mortar shells could.

Even Superman's now-familiar red boots were originally more like Samson's footwear. Joe Shuster's original drawings had him wearing sandals laced up to the calf. Reportedly, a colorist tired of all the detail work filled them in with red and turned them into the red
boots now known as part of the Superman costume.

"It wasn't Krypton Superman came from, but the planet Minsk."

In the meantime, Superman was becoming a metaphor for the Jewish American dream. He was from a far away, strange place, but managed to maximize who he was and
who he had become into a synthesis good for himself and for his adopted homeland. Famous cartoonist Jules Feiffer has said: "It wasn't Krypton Superman came
from, but the planet Minsk." And true enough, Clark Kent was his less alien, more assimilated self.

Next Year in Kandor

Like the Jewish people for nearly 2000 years, Superman was in mourning over the destruction of his ancient homeland; and like the Jewish people since the Holocaust, he mourned his entire community, expressing constant devotion to his lost culture, in part because it was his job to carry on as the sole survivor of the planet Krypton.

Or so he thought. In 1956 a landmark comic book story featured a rocket landing outside Metropolis. When Superman investigated, out flew a teenage Supergirl who turned out to be Superman's cousin. A small remnant community of Krypton was not destroyed, but when these survivors faced imminent annihilation, the girl's family packed her off on the first (and only) available rocket to the proverbial "Cousin in America" -- Superman.

In the early 1960s there were comic book stories where Superman and Supergirl would observe what appeared to be peculiar Kryptonian holidays that, despite how they looked to others, were observed stringently by the cousins from Krypton, who recognized themselves as 'Strangers in a strange land.'

Later, it emerged that there was one other city of Krypton that had survived. Years before the planet's explosion, a space criminal named Brainiac used a patented shrink ray on the former capitol city of Kandor. Shrunk to the size of a chess board along with its inhabitants, it was placed inside a bottle suspiciously like those used in water coolers. Years later, Superman liberated Kandor from Brainiac but could not solve the problem of permanently restoring the city and its population to normal size.

But Brainiac wanted that square foot of real estate back. So Superman kept Kandor safe at his fortress of solitude and he and Supergirl would, on occasion, use a temporary shrink ray to enter the bottle city.

This entire situation can be viewed as extremely Jewish. All of a sudden -- like American Jews -- Superman and Supergirl had a small homeland that they felt was dependent on them for its protection from those who held it for a while and wanted to regain it from the original and rightful owners. It was a miraculous, thriving remnant of a once-great culture, and the two could visit ancient archeological sites and the remains of their ancestral homeland, speak their ancestral language, be called by their real (Kryptonian) names, track down distant relatives and friends of their parents and even meet the occasional potential marriage partner of 'a similar background.'

Not unlike a summer program in Israel.

A Kryptonian could renounce his citizenship, hide his spaceship, pretend to be an earthling and never use his powers -- but a chunk of kryptonite could still kill him.

In Superman Returns, the Man of Steel faces his worst demons. He also faces kryptonite, the deadly (only to him) radioactive relics of his home planet. His ancestry on that planet is, of course, also what gives him his special abilities.

Like the Jewish people, perhaps Superman's primary weakness and his primary strength are really the same: where he comes from and how he uses that knowledge

The Talmud connects the word "Sinai" with the Hebrew word "sina" – hatred, teaching that the revelation at Mount Sinai generated hatred of the Jews. Carrying the banner of monotheism and a code of morality to a world that resists or rejects the message, (oftentimes shooting the messenger,) is a dangerous job. The irony: even Jews who don't know or don't care what happened at Sinai can be hated. A Kryptonian could renounce his citizenship, hide his spaceship, pretend to be an earthling and never use his powers -- but a chunk of kryptonite could still kill him. It's his choice, with or without kryptonite, whether or not to take advantage of the good that comes with the territory.

He can't choose to be immune to kryptonite. But he can choose to fly.

Alan Oirich writes on Jewish issues, film, and superheroes - in this case, simultaneously. He is the creator of the Jewish Hero Corps, the Comic Book team residing at www.jewishsuperhero.com

Matisyahu: Let Music be Your Flag

Mr. Death - A Bribe Blinds Even the Wise
What Makes Eli Run?
The Tyranny of Materialism
Science Enters the Mysterious Inner World of Consciousness
Comments
MOST POPULAR IN Current Issues
Our privacy policy